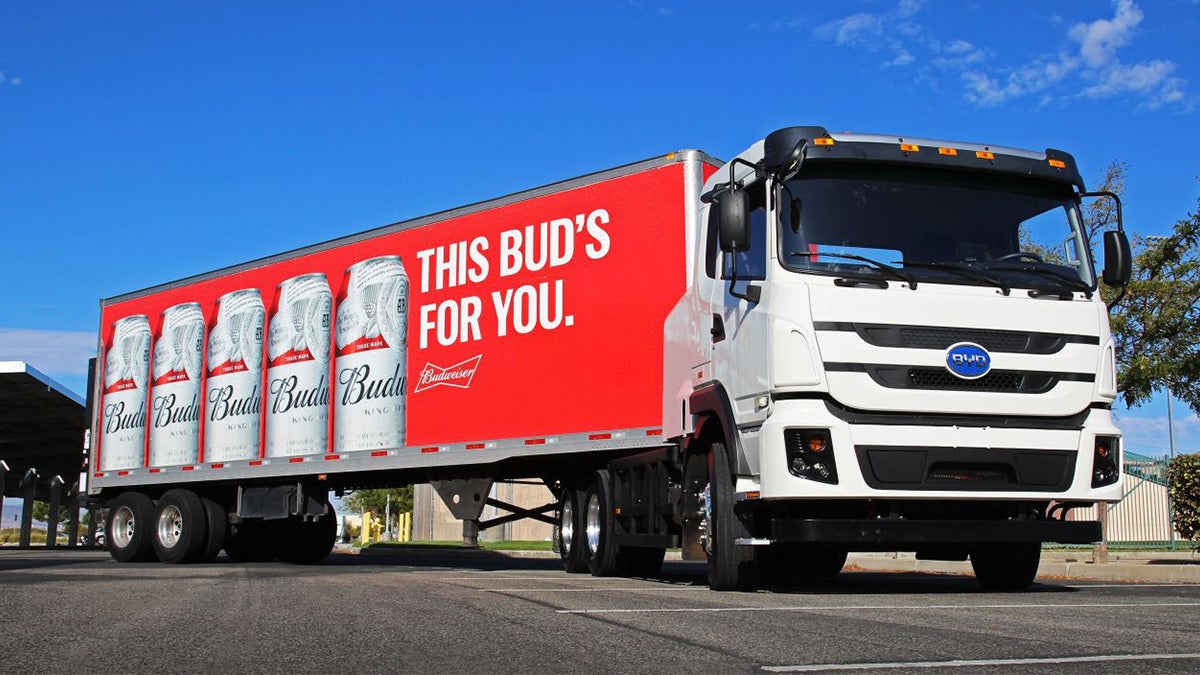 The company is purchasing the 21 trucks from electric vehicle company BYD, for Build Your Dreams. The deployment is part of a California initiative to increase the sustainability of warehousing and distribution, and the company will begin using the trucks at four of its distribution centers in Southern California.

“At Anheuser-Busch, we are committed to leading our industry towards a more sustainable future by reducing our carbon emissions across our value chain by 25% by 2025,” vice president of sustainability procurement at Anheuser-Busch Angie Slaughter said in a press release. “The transport industry is one that is prime for innovative solutions and we are excited to continue driving progress towards a zero-emission fleet through this partnership.”

The transportation sector generates the largest share of U.S. greenhouse gas emissions, according to the most recent data from the U.S. Environmental Protection Agency. The Anheuser-Busch project, officially called the ‘The Zero Emission Beverage Handling and Distribution at Scale‘, is expected to reduce emissions by 910 metric tons of carbon dioxide per year, the equivalent of taking 200 cars off the road.

“It’s not going to change the world by itself,” Kyle Field wrote for Clean Technica, “but the results of a successful completion of the project have the potential to have far reaching ramifications in the beverage transportation and distribution space and beyond.”

The project is part of California Climate Investments, a state initiative to use cap-and-trade dollars to fund emissions reductions, economic improvements, and public and environmental health, the press release explained. The California Air Resources Board (CARB) provided funding to electric-vehicle nonprofit Center for Transportation and the Environment (CTE) to facilitate and oversee the project. CARB hopes it will be replicated across the state, according to Clean Technica.

“With this exciting project, Anheuser-Busch is providing a real-world demonstration of the future for moving goods and products throughout California,” CARB Executive Director Richard Corey said in the press release. “I congratulate all the companies partnering on this impressive effort for embracing zero-emission trucks, and showing other businesses a zero-emissions solution to moving goods and cargo that cleans the air, protects our children’s health, and fights climate change.”

In addition to deploying electric trucks, Anheuser-Busch will also work with ENGIE Services U.S. (ENGIE) to install a 958.5 kilowatt solar array at its Carson, California facility in order to offset the energy used to charge the vehicles. ENGIE will also design the charging stations.

The trucks will be operational by the end of 2019, and the project should be completed by early 2021, CTE said in the press release.

This isn’t the only step Anheuser-Busch has taken to reduce its greenhouse gas emissions, Freight Waves reported. It also has an order pending for 800 Nikola fuel cell-powered electric trucks, which it expects to use for deliveries by the end of 2022. It also ordered 40 electric Class 8 trucks from Tesla.