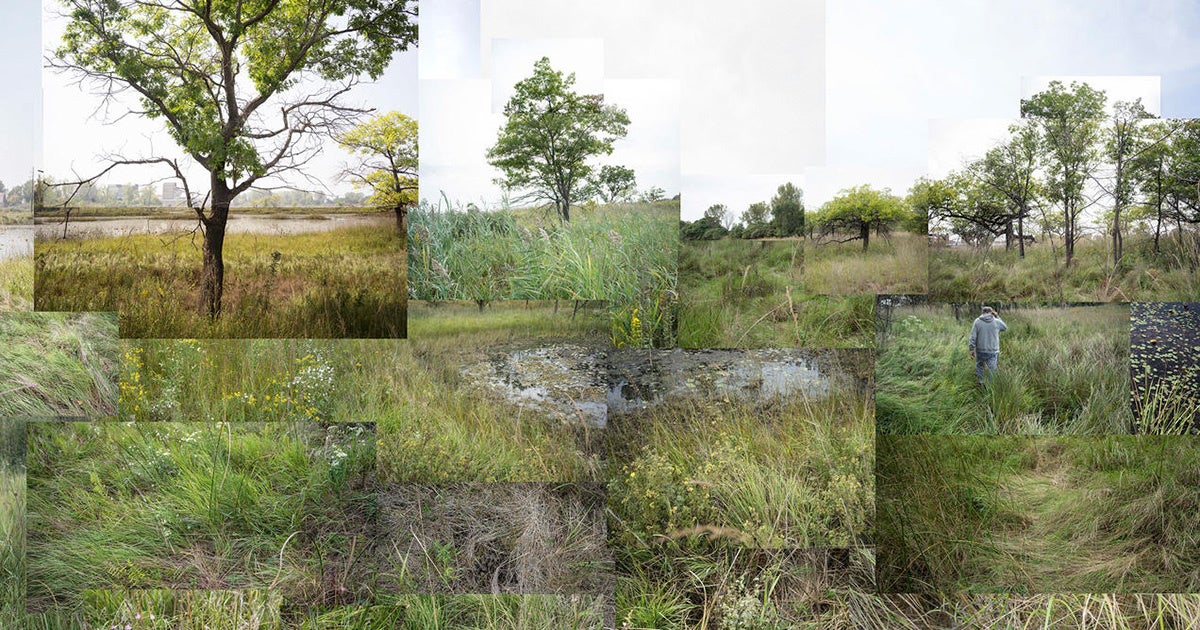 Photographer Terry Evans has been piecing together prairies for more than 40 years.

After she first encountered the plant life growing in these iconic midwestern habitats in 1978, Evans memorized their “names like poems”: the silverleaf scurfpea, a dark-violet wildflower; the prickly pink catclaw sensitive briar; the white orchid known as nodding lady’s tresses; and green antelopehorn, a milkweed that serves as a nursery to monarch butterflies. “I felt embarrassed when I came across one whose name I’d forgotten or hadn’t yet learned,” Evans said. “It was like slighting a friend.”

Today Evans is continuing her education by breaking down these grassland ecosystems into their component parts. Each large-scale image from her new series, Ancient Prairies, is made up of a patchwork of individual photographs hinting at the ecological complexity that underlies the prairie landscape. 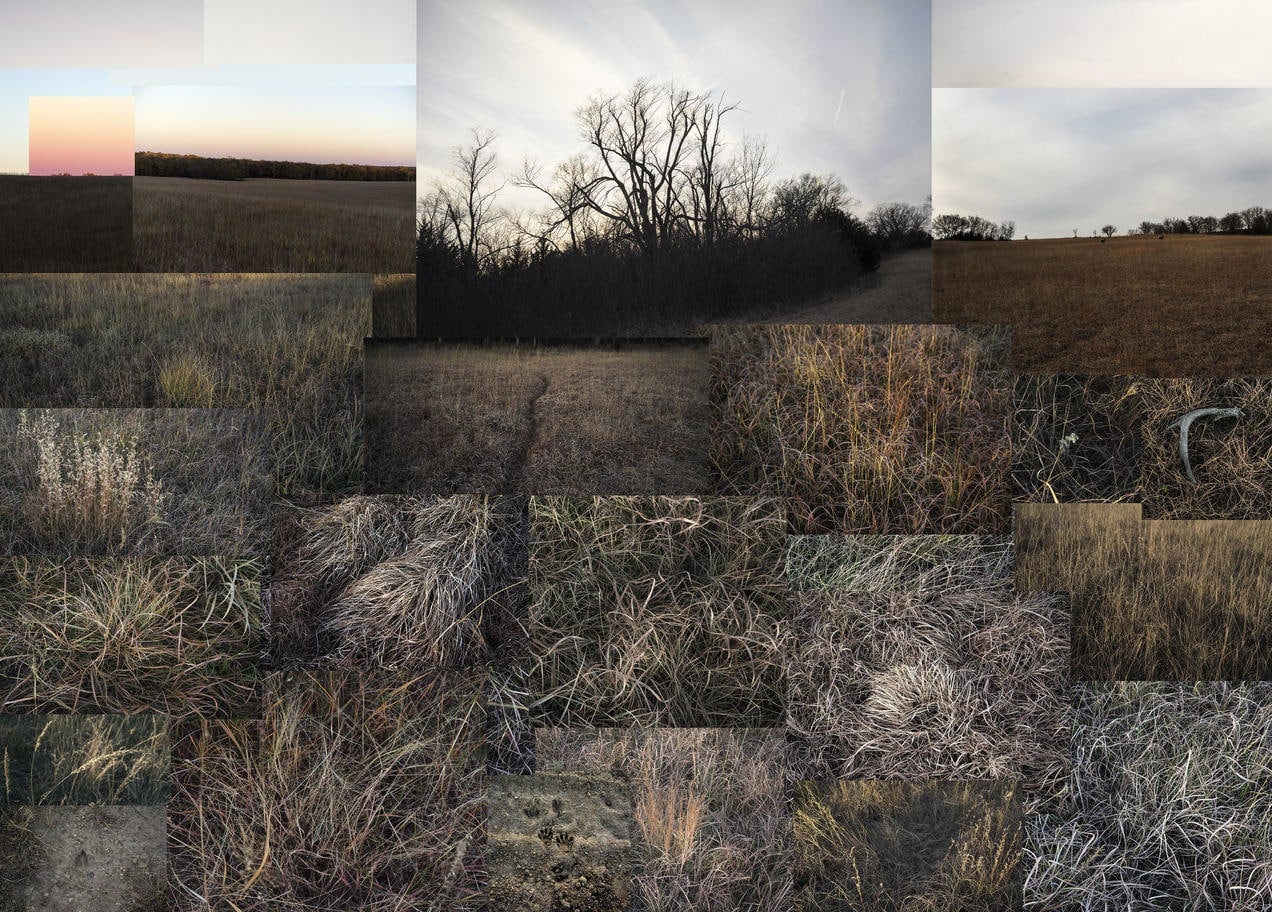 Landscape photography was not part of Evans’s original plan during her years at the University of Kansas, where she received a BFA in painting. For years the Missouri-born artist drew inspiration from the relationships between people. But a decade after Evans graduated, a friend asked her to capture some images of a virgin prairie not far from Evans’s home in Salinas, Kansas. She agreed, and the friendly favor forever changed the trajectory of her career.

“Suddenly I began to see the ground,” Evans wrote of the experience. “The realization came that I could stand in one spot and look at the ground for at least an hour and still not see everything happening at my feet … There was a whole cosmology there, and that was fascinating to me.”

The artist’s depictions of prairies have traveled far beyond the habitat’s natural range in the middle of our continent. Her work has brought the American prairie to the Tokyo Fuji Art Museum, the San Francisco Museum of Modern Art, the Art Institute of Chicago, the Museum of Modern Art in New York, the Smithsonian American Art Museum and more. 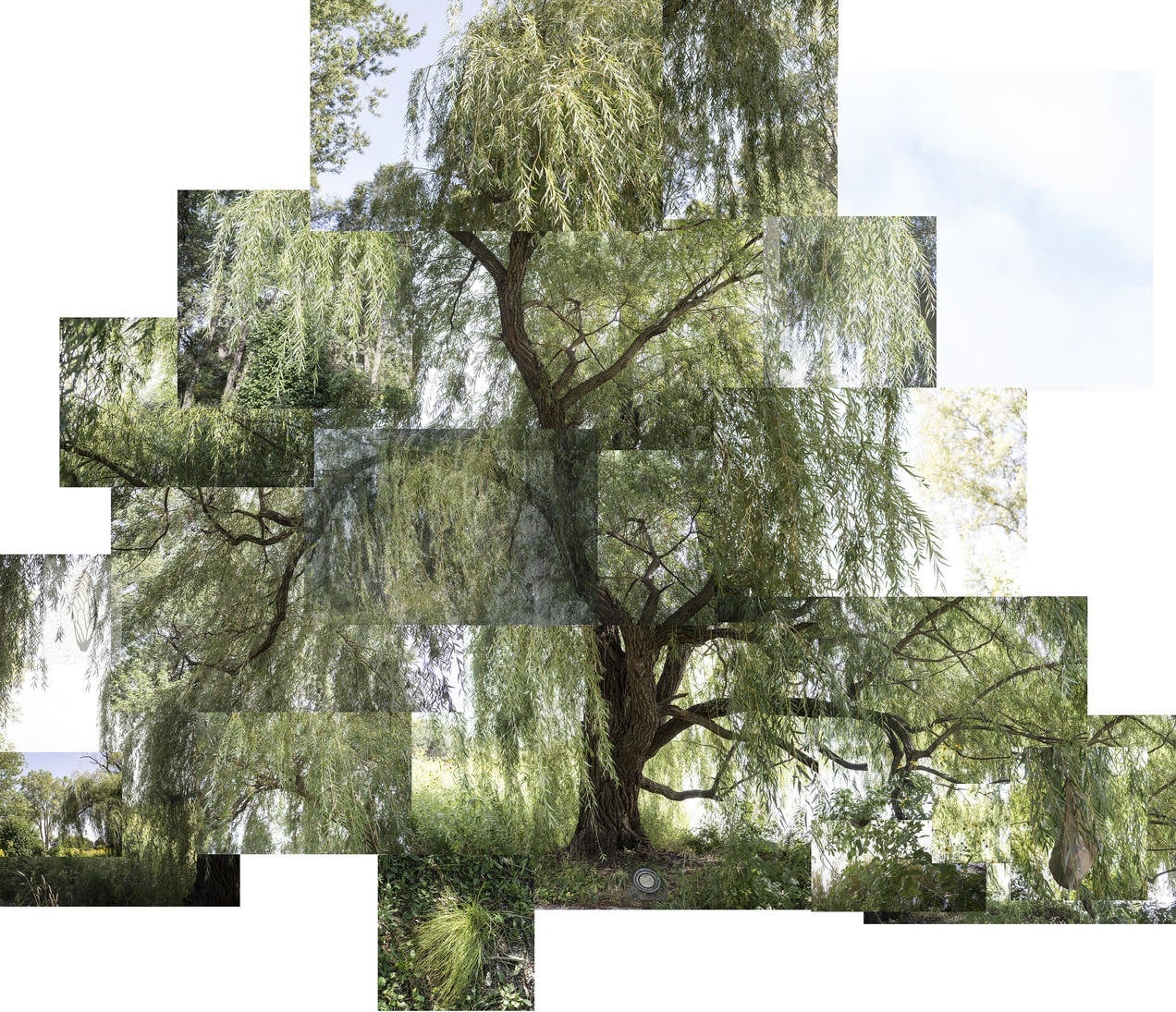 Even when people are not directly in the frame, Evans’s photography still captures the kinds of intricate human relationships that originally caught her eye as an artist — only instead of studying how people interact with each other, she now explores how people engage with the land.

Each composite image in Ancient Prairies takes Evans about a month to complete. At the outset, the artist has no idea what the composition will ultimately look like. She draws on her education as a painter to structure the piece.

Only 1 to 4 percent of the tallgrass prairie that once covered 170 million acres of North America still exists today; settlers plowed the vast majority to make way for the eventual vast monocultures of wheat and corn. While pockets of native prairie remain, Evans said they “would not exist without human care.” Some, like her first love, Fent’s Prairie, thrive as a result of intensive preservation efforts. Others have been painstakingly restored with prescribed burns, invasive species removal and native plantings. 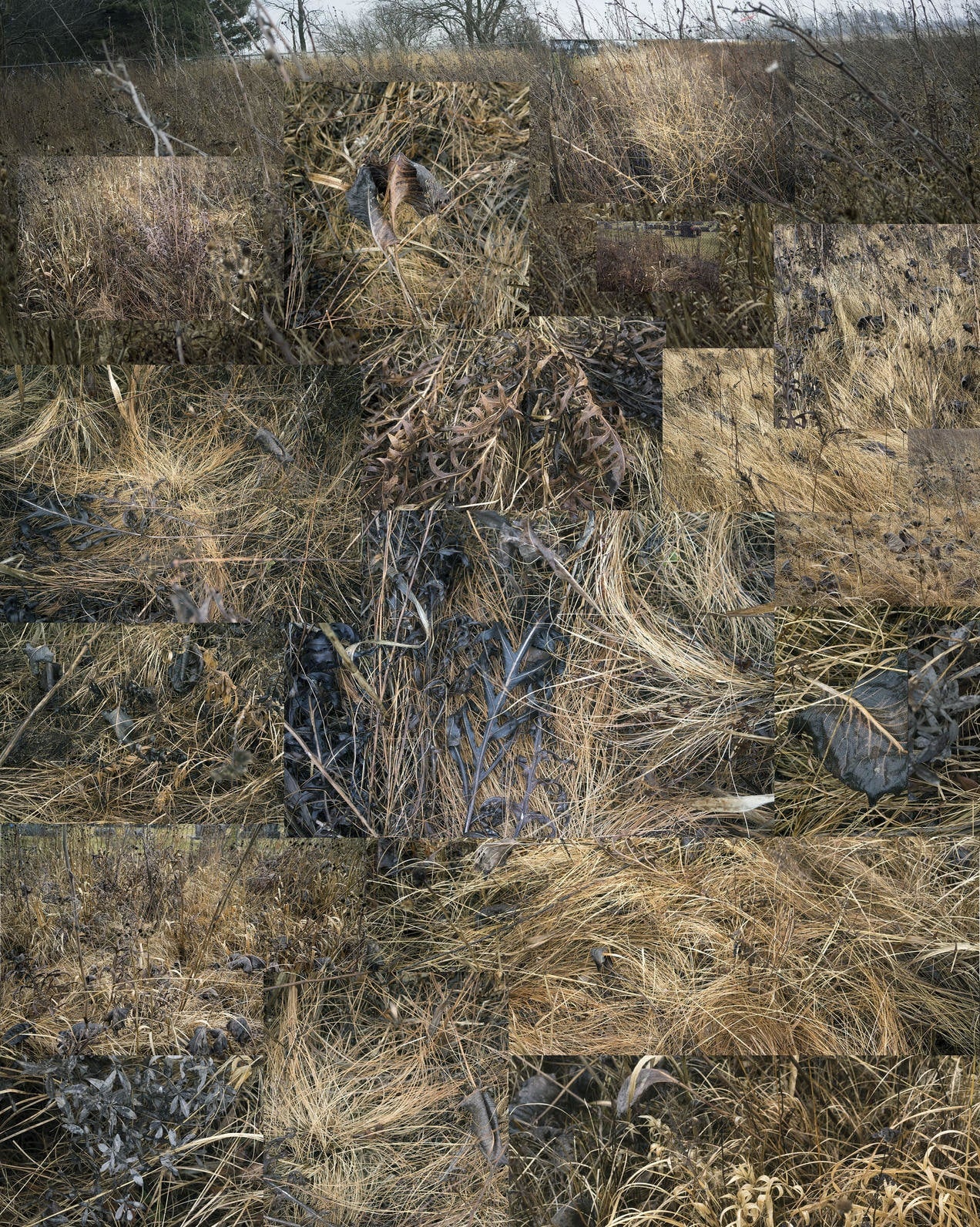 Evans’s interest in humanity’s influence on the environment has also led her to industrial landscapes. Working alongside writer Elizabeth Farnsworth earlier this decade, she documented activists fighting to ban petcoke on the Southeast Side of Chicago, the city where she now lives and works. But after spending years working on projects such as Petcoke vs. Grassroots, Fractured: North Dakota’s Oil Boom and Steel Work, Evans said, “I started having this longing to see some undisturbed prairie again . . . Beauty matters for our spirit.”

When she returned to Fent’s Prairie, though, she found that something had changed within her. “I was no longer satisfied with making single images,” Evans said. “It seemed like there’s so much rich information and wisdom in an untouched or restored ecosystem.” 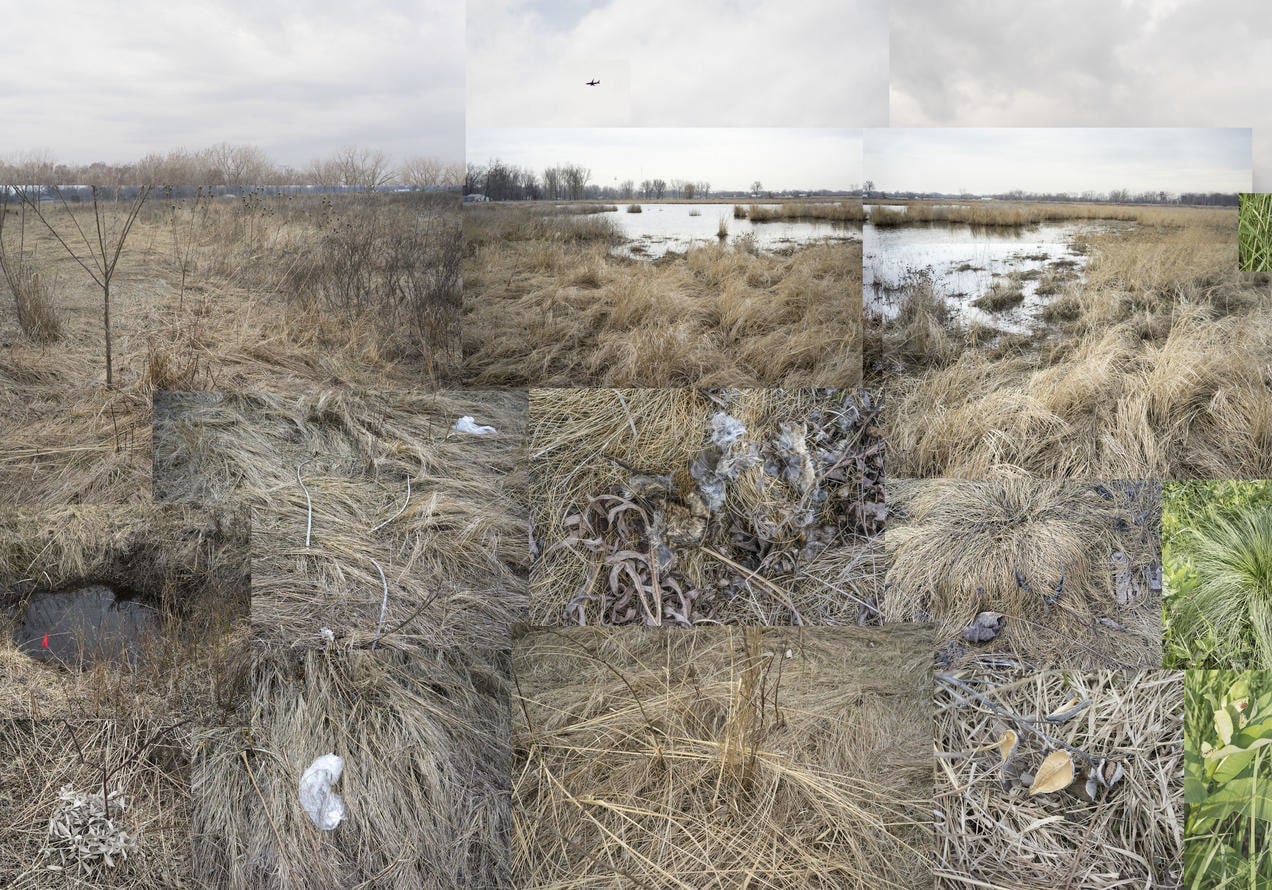 The name of the series, Ancient Prairies, isn’t intended to consign its subject matter to the past. “It’s not about nostalgia, and they’re not a eulogy of something that’s gone,” Evans said. “Rather, they’re a celebration of life that can still inform us. We need these places as an archive of what an undisturbed ecosystem looks like.”

Five images from Ancient Prairies are featured in the winter issue of Orion magazine.