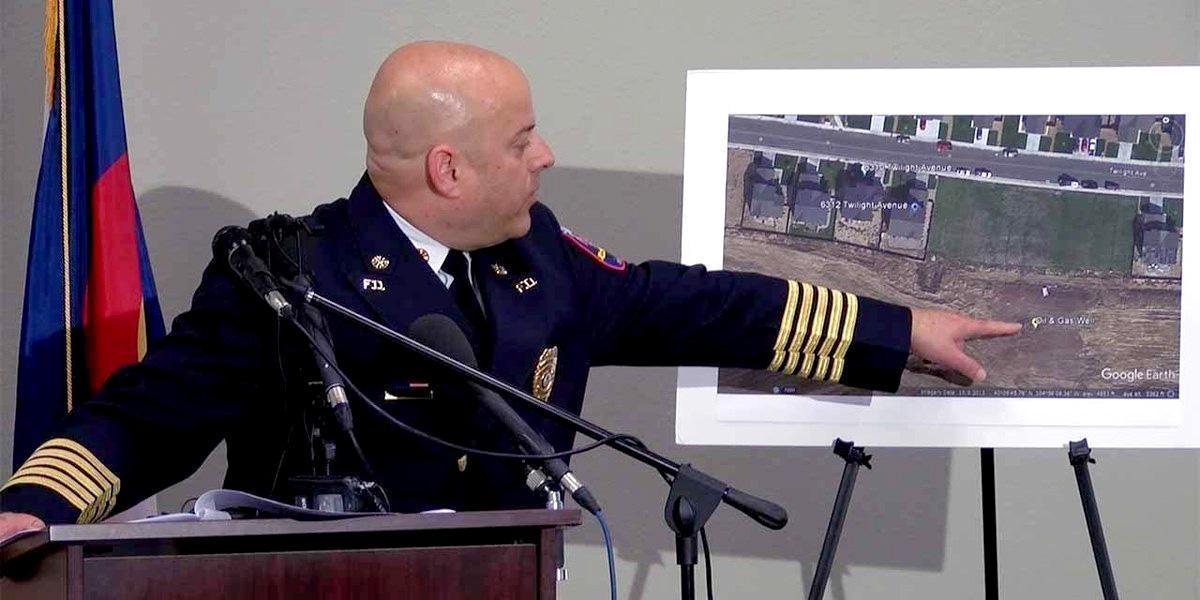 The deadly April 17 explosion in the town of Firestone, Colorado, was caused by a leak from a small, abandoned pipeline that was still connected to a natural gas well owned by Anadarko Petroleum, investigators announced Tuesday.

The 1-inch, underground pipeline had been cut about 10 feet from the recently built home on Twilight Avenue where two men died and one woman was severely injured, Frederick-Firestone fire department officials said. Why the flow line was cut off, left uncapped and still connected to the producing well is currently unclear.

Frederick-Firestone Fire Protection District chief Ted Poszywak said at a Tuesday press conference that the pre-refined gas was not odorized for safety as it seeped from the cut-off line into the home through French drains and a sump pit.

“Those inside the home would not have smelled it,” he said.

Mark Martinez and his brother-in-law Joseph William Irwin III, both 42, were killed in the explosion. Mark’s wife, Erin Martinez, was injured as well her 11-year-old son.

The Anadarko well was less than 200 feet from the home. The well was drilled in 1993 and had previous owners. It was in place before the Twilight home was built.

Poszywak stressed that it was not the well’s proximity to the home that caused the explosion, rather it was the pipeline leading to the well head that caused the buildup of methane that led to the explosion. He said no adjacent homes are in any danger as a result of the severed line.

According to the Associated Press, Colorado Oil and Gas Conservation Commission director Matt Lepore said that the flow line was cleanly cut, meaning it could have been severed by construction equipment while the neighborhood was being built.

Lepore said that a line taken out of service should be disconnected and sealed at both ends and all flammable gas is supposed to be removed.

Anadarko, Colorado’s largest oil and gas producer, has shut more than 3,000 producing vertical wells following the explosion. The company said it is cooperating with investigators.

Colorado Gov. John Hickenlooper has since ordered inspections of all similar gas lines within 1,000 feet of occupied buildings. He said energy companies must ensure that flow lines no longer in use are properly marked and capped, and any abandoned flow lines that are cut off underground must be sealed.

“Public safety is paramount,” Gov. Hickenlooper said. “We are assessing whether these operations were conducted in compliance with state law and the Colorado Oil and Gas Conservation Commission’s (COGCC) rules.”

The tragedy has resulted in fierce outcry from locals, anti-fracking activists and environmental groups over the risks of oil and gas production in Colorado and they are calling on state regulators to impose tighter setback requirements.

The state imposes a 500-foot setback between new oil and gas wells and existing homes. However, local governments decide how close new homes can be built to existing wells. The house that burned in Firestone was built 178 feet away from the existing well—well within the towns’ standard of at least 150 feet.

“Our families’ safety and security must be our highest priority—not corporate polluters’ profits,” Jim Alexee, director of the Colorado Sierra Club said. “Immediate action must be taken, and we support Governor Hickenlooper’s directive to revisit the integrity of all oil and gas lines within 1000 feet of occupied buildings.”

In March, the Colorado Court of Appeals ruled that the state’s oil and gas commission strike a balance between the regulation of oil and gas operations and protecting public health, the environment and wildlife.

In light of the appellate court’s decision, the Sierra Club is calling on the Colorado Oil & Gas Commission to place an immediate halt to the issuance and processing of all permits not yet approved or applied for.

“Earlier this month, the Colorado legislature voted against a bill that would have moved new drilling operations at least 1,000 feet away from school playgrounds,” Alexee said in an earlier statement. “I call on our leaders to reconsider safe, common sense protections that will put the health and safety of Coloradans first.”

Just a week before the fatal Firestone explosion, state lawmakers killed a setback rule bill that would have prevented oil and gas producers from drilling wells within 1,000 feet of school property lines.

The Firestone explosion has also sparked worries from residents in other energy-rich states. A source pointed out to EcoWatch that Ohio’s setback rules are only 100 feet from homes and other occupied buildings.