An Uncertain Future for African Elephants 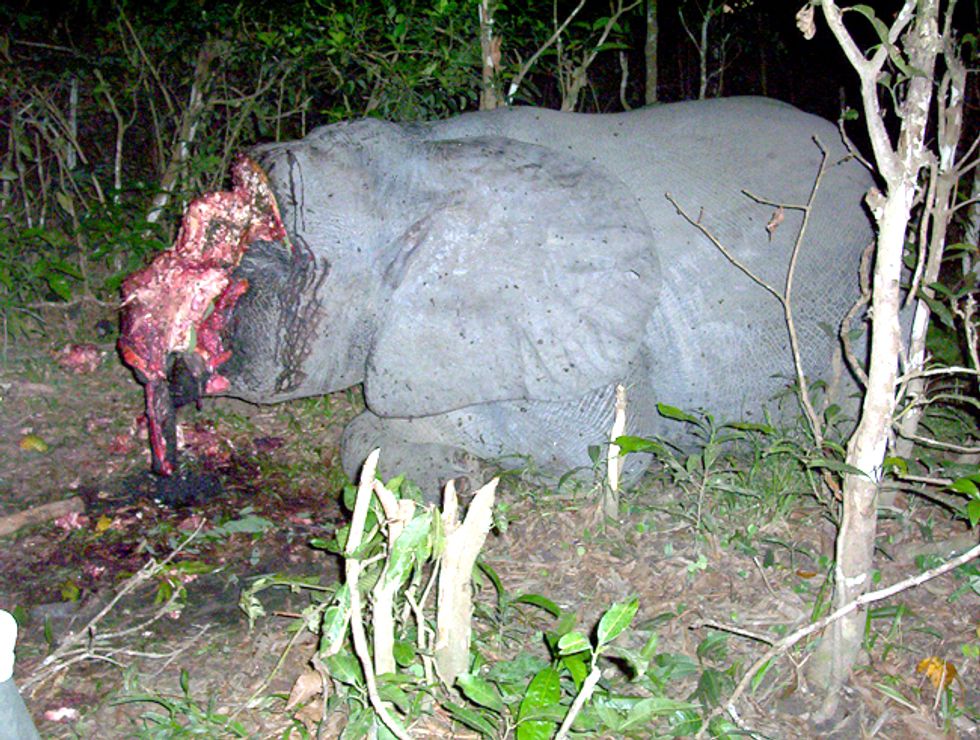 [Editor's note: Warning, this article contains graphic images that are extremely disturbing. These photos illustrate the severe threat African elephants are experiencing from poaching due to the growth in illegal ivory trade. I hope these photo inspire you to action.]

Populations of elephants in Africa continue to be under severe threat as the illegal trade in ivory grows—with double the numbers of elephants killed and triple the amounts of ivory seized, over the last decade.

According to a new report, Elephants in the Dust—The African Elephant Crisis, increasing poaching levels, as well as loss of habitat are threatening the survival of African elephant populations in Central Africa as well as previously secure populations in West, Southern and Eastern Africa.

The report—produced by the UN Environment Programme (UNEP), Convention on International Trade in Endangered Species (CITES), International Union for Conservation of Nature (IUCN) and Wildlife Trade Monitoring Network (TRAFFIC)—says that systematic monitoring of large-scale seizures of ivory destined for Asia is indicative of the involvement of criminal networks, which are increasingly active and entrenched in the trafficking of ivory between Africa and Asia.

At sites monitored through the CITES-led Monitoring Illegal Killing of Elephants (MIKE) programme alone, which hold approximately 40 percent of the total elephant population in Africa, an estimated 17,000 elephants were illegally killed in 2011. Initial data from 2012 shows that the situation did not improve. However, overall figures may be much higher.

These threats compound the most important long-term threat to the species’ survival—increasing loss of habitat as a result of rapid human population growth and large-scale land conversion for agriculture, which provides for international markets.

"The surge in the killing of elephants in Africa and the illegal taking of other listed species globally threatens not only wildlife populations but the livelihoods of millions who depend on tourism for a living and the lives of those wardens and wildlife staff who are attempting to stem the illegal tide."

“This report provides clear evidence that adequate human and financial resources, the sharing of know-how, raising public awareness in consumer countries, and strong law enforcement must all be in place if we are to curb the disturbing rise in poaching and illegal trade," says John Scanlon, secretary-general of CITES.

The report recommends critical actions, including improved law-enforcement across the entire illegal ivory supply chain and strengthened national legislative frameworks. Training of enforcement officers in the use of tracking, intelligence networks and innovative techniques, such as forensic analysis, is urgently needed.

“Urgent action is needed to address the growing challenges elephant populations are facing, but it will only happen if there is adequate political will to do so,” says Dr Holly Dublin, chair of the IUCN/SSC African Elephant Specialist Group.

These efforts include the need to fight collusive corruption, identifying syndicates and reducing demand.

Elephants are also threatened by the increasing loss of habitat in around 29 percent of their range as a result of rapid human population growth and agricultural expansion.

Currently, some models suggest this figure may increase to 63 percent by 2050, a major additional threat to the survival of the elephant in the long-term.

Other key findings from the report

• Large-scale seizures of ivory (consignments of over 800 kg) destined for Asia have more than doubled since 2009 and reached an all-time high in 2011.

• Large movements of ivory that comprise the tusks of hundreds of elephants in a single shipment are indicative of the increasingly active grip of highly organized criminal networks on Africa’s illicit ivory trade.

• These criminal networks operate with relative impunity as there is almost no evidence of successful arrests, prosecutions or convictions.

• Globally, illegal ivory trade activity has more than doubled since 2007, and is now over three times larger than it was in 1998.

• The prevalence of unregulated domestic ivory markets in many African cities, coupled with the growing number of Asian nationals residing in Africa also facilitates the illegal trade in ivory out of Africa.

• Poaching is spreading primarily as a result of weak governance and rising demand for illegal ivory in the rapidly growing economies of Asia, particularly China, which is the world’s largest destination markets.

• The high levels of poaching are, in some cases, facilitated by conflicts that, through lawlessness and ensuing abundance of small arms, provide optimal conditions for the illegal killing of elephants.

The report—released in Bangkok, at the 16th meeting of the Conference of the Parties to the CITES convention—combines information from sources including the IUCN Species Survival Commission (SSC) African Elephant Specialist Group, MIKE and the Elephant Trade Information System (ETIS), managed by TRAFFIC on behalf of CITES.