An Overview of the New Nuclear Deal in the UK 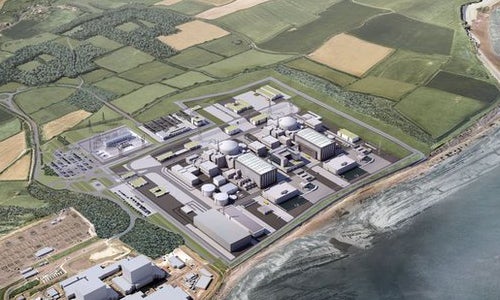 The first new nuclear plant in 20 years will be built at Hinkley Point in Somerset, England. The much-anticipated announcement marks the end of months of negotiations between ministers and French energy company EDF Group.

Energy Secretary Ed Davey told the BBC last week the deal represented “extremely good value for money for consumers.” The government has long maintained that nuclear power is core to the government’s plans to reduce power sector emissions. Two Chinese companies will also have a minority stake in the plant, according to a government announcement. 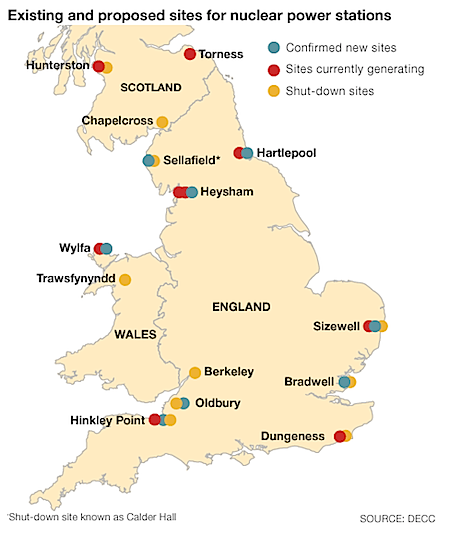 Now the details are confirmed, here’s a look at the main questions.

How Much Will It Cost?

The government has been wrangling with EDF over how much it will pay the company for the new nuclear reactor’s electricity. After a lot of back and forth, they have agreed a guaranteed price of £92.50 per megawatt hour. But if EDF builds a second new plant at Sizewell in Suffolk, this price will be lower —£89.50—because the company can share costs between the sites, the government says. EDF hasn’t yet made a final investment decision on the second plant.

The price is significant because it decides how much consumers will pay for nuclear power.

The government hopes that by guaranteeing a price, it will encourage companies to build low carbon power plants. The government originally offered EDF a strike price of around £80, but EDF was reportedly holding out for closer to £100. So the price agreed today falls in between. Both sides had reportedly accepted the price had to be below the £155 offered to offshore wind generators.

The two sides have also been negotiating over the contract’s length. The government has offered EDF a 35-year contract. This is more than double the length of the contracts set to be offered to renewable energy sources.

EDF wanted a long contract because nuclear plants are typically a high-risk investment, according to reports. Recent European projects have been beset by cost overruns and delays, but by guaranteeing the price for 35 years, the government has significantly reduced the risk of EDF and their partners not seeing a return on their investment.

What’s more, the government says the deal includes provision for the strike price to be adjusted up or down, “in relation to operational and certain other costs” and based on “changes to the amount of tax payable by the project company.”

Ed Miliband’s announcement that Labour would freeze energy bills for two years if it was elected, followed by news of energy company price hikes, has brought energy policy to the centre of the media debate in recent weeks. As the agreed strike price is higher than the current wholesale price of electricity, there is likely to be a lot of debate around whether it delivers value for money.

How Will This Affect Energy Bills?

Supporting new low carbon nuclear plants will add to the ‘green charges’ section of a consumer’s bill. But not until the power plants start producing power in 2023, and only if the wholesale cost of electricity remains below the strike price.

As the new nuclear deal ties the subsidy level to the wholesale price of electricity, it’s tricky to predict how much the strike price will affect household bills.

The government says building a new fleet of nuclear power stations could reduce household energy bills by more than £75 a year in 2030, compared to a future where nuclear is not part of energy mix. This is presumably based on the assumption that the costs of fossil fuels will rise in the future—making nuclear cheaper in comparison.

At the moment, the strike price is twice the current wholesale price of energy. If the costs of fossil fuels such as coal and gas rises in the future, the wholesale price of electricity could increase, however. That could mean consumers pay less to subsidise nuclear but have higher bills overall.

Alternatively, the wholesale price of electricity could fall as more renewable power comes online, as they have no fuel costs. That would mean nuclear and renewable operators get more ‘top-up’ payments and consumers see an increase in ‘green charges’ on their bills.

There are also longer-term costs that those calculations probably don’t include. For example, the government has offered to underwrite the construction costs of the new power plants to the tune of £10 billion.

There’s also the issue of decommissioning the plants. Currently, about half of the Department of Energy and Climate Change’s budget is set aside to shut down old nuclear plants through the Nuclear Decommissioning Authority, paid for out of the government’s coffers. But government guidelines for new nuclear builds will require EDF to set aside enough cash to cover decommissioning costs, taken from the strike price profits.

The cost of nuclear energy is only part of the story, however. Davey claims nuclear’s low carbon quality is ultimately what swayed him to accept a new fleet was necessary in the first place. 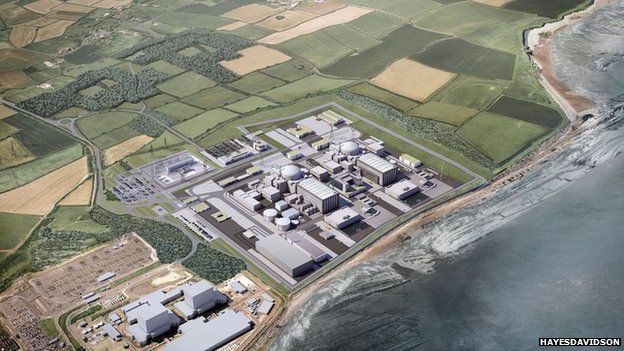 Hinkley Point C is set to take 10 years to become fully operational. It will be made up of two nuclear reactors and will be built next to Hinkley Point A and B.

What Will It Do to Greenhouse Gas Emissions?

The UK has a number of climate change commitments that require it to decarbonize the power sector—and nuclear power is a key part of the government’s strategy to achieve those goals.

The UK Climate Change Act requires the government to reduce the UK’s greenhouse gas emissions by 80 per cent by 2050. The new nuclear deal should help the government to significantly reduce power sector emissions by squeezing higher emitting coal plants—and to a lesser extent, gas plants—out of the energy mix.

The government is also required to provide for 15 per cent of the country’s energy demand from renewable sources by 2020 under European Union (EU) laws—and the EU may put another target for 2030. But the UK government is lobbying the European Commission to put a single emissions target in place instead. That could potentially be bad news for the renewables industry, as it could encourage the government to pursue nuclear instead of building more solar or wind farms.

Critics argue that the deal doesn’t make economic sense. Professor Paul Dorfman from University College London’s Energy Institute says the new nuclear deal ties consumers into subsidizing one energy source for a whole generation—potentially at a very high level, depending on the wholesale price of electricity. In contrast, renewable energy sources’ shorter contracts mean the subsidy can be cut if the costs of building turbines or solar panels fall. He predicts that the cost of nuclear “will flatline or hike, while renewables will do nothing but go down”—so consumers could be getting a bad deal if the government pursues nuclear at the expense of renewables.

And the Hinkley deal could be just the start. The industry plans to build a further 13 gigawatts of new nuclear in the UK. If today’s deal is well received by the public and industry, it could encourage the government to offer a similar contracts to other developers.

When Will the Nuclear Plant Be Ready?

From today’s media excitement you could be forgiven for thinking Mr Burns and Co. will be moving in any day now. Signing the contract is just the start of a long process, however.

The Nuclear Energy Agency says it can take up to eight years to build a new plant, assuming all goes to plan. EDF has suggested the Hinkley plant could be producing power by 2018—but the government suggests today that the plant will be generating electricity from 2023. EDF’s latest effort—a 1.6 gigawatt power plant located in western France—is set to taketwice as long and cost twice as much as originally planned.

EDF blamed the delays on the rising costs of materials, a couple of accidents that held up engineerin, and new regulations that came into force after the Fukushima nuclear accident in 2011. EDF also said construction was difficult as the plant was the first nuclear power station to be built in France in 15 years—a concerning message given the UK’s newest nuclear plant was constructed two decades ago. The delays were reported as a bad omen for the Hinkley plant, despite EDF’s assurances.

And the UK’s new deal could still be held up by the European Commission, which has to approve any arrangement that could be seen as giving a particular industry a competitive advantage. The commission last week indicated that the state aid rules—dictating which industries can receive government support —wouldn’t be extended to nuclear power. That would force the government to appeal to the Commission on a case by case basis, potentially further delaying the start of construction.