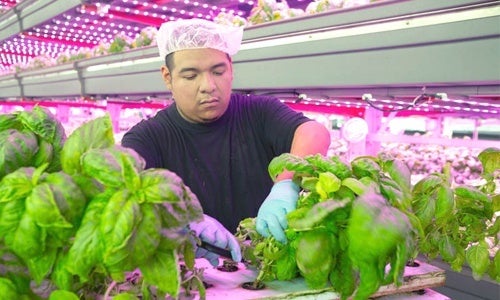 FarmedHere, a 90,000-square-foot space in Chicago, is not only the first organically-certified indoor vertical aquaponic farm in Illinois, it’s also the largest indoor farm in North America. The farm, which we featured on EcoWatch last month, has expansion plans. The company wants to open 18 indoor vertical farms in cities across the U.S.

“We want to be the national local brand,” CEO Matt Matros told FastCoExist. “We can touch 75 percent of the country with 18 farms.” At its Chicago farm, they sell their organic greens and herbs grown under LED lights to 200 customers (Whole Foods is one) all within a 200-mile radius of the farm.

That short travel distance not only reduces carbon emissions, it also allows for super fresh and nutritious produce. “If you think about traditional produce, which is grown in California, they harvest, and you’re not eating it for three weeks,” said Matros. FarmedHere delivers its produce to customers within 24 hours.

Indoor hydroponic and aquaponic systems, which are sprouting up from Japan to Jackson, Wyoming, have many benefits over traditional outdoor farming. They use 95 percent less water and, since the company adheres to organic principles, the plants are grown without the use of synthetic herbicides or pesticides. And due to major advances in LED technology, the company can grow its plants in 30 days—half the time of traditional farms.

The company said vertical farming is finally ready to scale, so they are “currently working with real estate agents to find land in cities across the country,” FastCoExist reported. And they don’t plan on limiting themselves to just the U.S. either.

“There’s a substantive need for this,” Matros said. “In northern Africa, where there’s not a lot of access to fresh clean water … in China and India, where there’s just a lot of people. That’s the beauty of this industry. Once we crack the code in the U.S., we can easily just drop these modules anywhere around the world.”

FarmedHere, along with AeroFarms, Green Sense Farms and Spread are developing the technology to become robot-run farms. Matros told Tech Insider their next facility, which will be open next year, will employ technology used by the likes of Amazon, which uses factory robots to attend to packages in its massive headquarters.

Vertical farms have really taken off in recent years—even being hailed as the future of agriculture. AeroFarms, which is building a facility in Newark, New Jersey, plans to construct 25 vertical farms over the next five years. Sky Greens in Singapore has been hailed as the “the world’s first low-carbon hydraulic driven urban vertical farm.” Mirai has factories in Japan and Mongolia churning out 10,000 heads of lettuce a day. And in London, Growing Underground is utilizing a former World War II bomb shelter to grow food.