An Open Letter to Naomi Klein 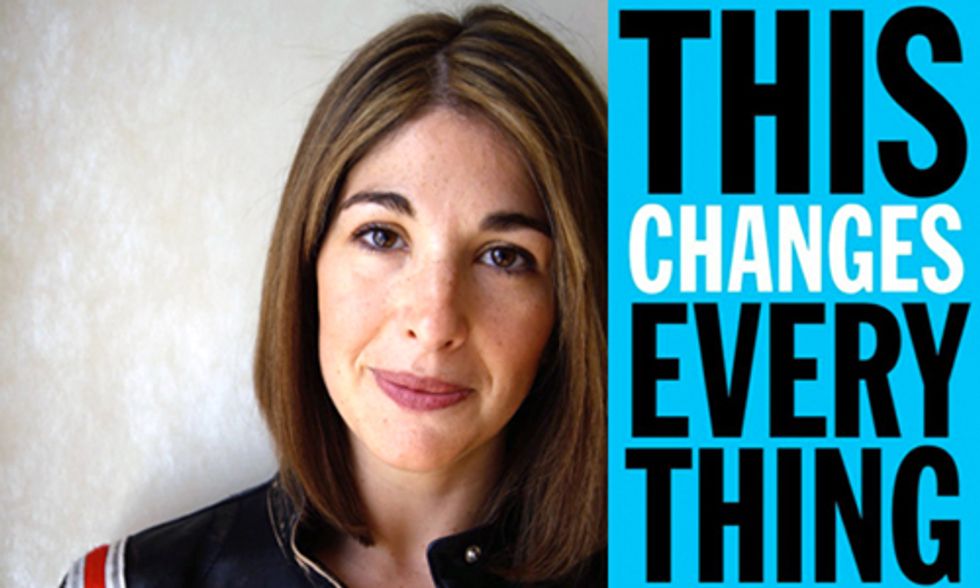 I’ve just read, twice actually, your great new book This Changes Everything. It’s very valuable and a must-read for people who appreciate both the seriousness of the climate crisis and the importance of progressive, justice-based social change. You have clearly worked long, hard and well to put together a comprehensive narrative about the climate issue, its connections to other issues, the state of the movement and the state of the climate denier opposition, the necessity of up-from-below initiatives and alternatives, the importance of solidarity with and support for Indigenous peoples fighting energy corporations, and more.

I particularly appreciated your raising up and focus on what you called “blockadia;” clearly, without civil disobedience and a growing number of people willing to engage in it, the already-long-odds against human society and all life forms on Earth will only get longer. And, though I was not surprised, it was really good to read your takedown of fracking all throughout the book and your critique of the corporate-funded environmental groups that continue to support it. Their doing so despite all the evidence of how dangerous fracking is both for the climate and for people experiencing fracking wells, gas infrastructure and the planned export terminals is outrageous.

So why am I writing you in this “open letter” way?

As valuable as the book is, I am concerned by the position you articulate throughout it that, as you say in your introduction, “the urgency of the climate crisis could form the basis of a powerful mass movement, one that would weave all these seemingly disparate issues into a coherent narrative about how to protect humanity from the ravages of both a savagely unjust economic system and a destabilized climate system. I have written this book because I came to the conclusion that climate action could provide just such a rare catalyst.” (p. 8)

Elsewhere you write, “climate change can be a People’s Shock, a blow from below. It can disperse power into the hands of the many rather than consolidating it in the hands of the few ... (p. 10)

What is my problem with this? It’s not that I disagree that, yes, “the climate crisis could form the basis of a powerful mass movement,” not at all. Indeed, we are thankfully seeing it happen, as you helpfully report on and analyze, and as the massive People’s Climate March in NYC on Sept. 21 clearly manifested.

I totally agree that a mass movement that links the climate issue with a broad range of other issues, collectively working toward a much more just, peaceful and love-centered society, is to be desired and should be worked for. That is not the problem that I have. I have been doing that work for at least 40 years and I will do so until the day I die.

The problem is that, as you understand and articulate, “we have only a few short years to dramatically lower our emissions.” (p 110).

Elsewhere you refer to this teens decade of the 21st century as the decisive decade, which it is. So is it realistic to think that, by 2018 or 2019, a mass social movement with the essentially revolutionary agenda you put forward in your book, one which puts urgent action to reduce greenhouse gas emissions at the top of its list, is going to bring about the change in power relations in the U.S. and/or elsewhere in the developed capitalist West such that this radical program can be enacted?

It sure seems unlikely to me.

Eleven years ago I made a decision to change my life, to change my primary social change work from trying to build a progressive, multi-issue, independent political force in the USA to trying to build a mass movement to address climate change. I decided to do this after the 2003 late summer heat wave in western Europe that led to 30,000 or more deaths. That was a wake-up call for me. I took several months to study this issue, and that study led me to realize that the climate crisis was much further along and more imminent than I had thought it was, and this led to the change in my primary social change work focus the next year.

I remember talking to one of my radical friends at a party around that time. When I told him about this change, he said something like, “I think the best way to deal with the climate crisis is to work to make a revolution.” My response was: “Easy to say, but much harder to do, and I’m not hopeful a revolution is going to happen any time soon given the state of the political Left.”

Eleven years later, I can see some positive developments with the political Left, broadly speaking, including the fact that much of it has finally come around to appreciate the importance of the climate issue, but in the U.S. at least, there certainly is no basis to think that society-wide radical change is going to happen in this decade. The emergence of a visible and mass-based, multi-issue, independent progressive movement, yes, that is possible and badly-needed, but not a full-scale taking over of the federal government and implementation of that progressive agenda.

So I am in agreement that those of us who share the values and perspectives that you put forward should be working to build a multi-issue movement with climate at the center. We should be doing that. But putting climate “at the center” means just that. It means that we understand that time is running out if we are to avoid climate tipping points that will make it almost impossible to avoid worldwide, escalating, catastrophic climate change. And this means that we need to be consistently prioritizing various types of organizing and action specifically on that issue.

I have to say, Naomi, that there was a particular paragraph at the very end of your book that helped to crystalize for me this issue that I am raising. It was where, in the context of your writing about changing a pro-capitalist worldview and ideology, you said that “a fight for a minimal carbon tax might do a lot less good than, for instance, forming a grand coalition to demand a guaranteed minimum income.”

The first time I read it I missed the “minimal” and “grand” adjectives, so as I ended my first reading of your book five pages later, I kept thinking, how could she believe that, from the standpoint of addressing the climate crisis, working for a guaranteed minimum income is a better thing to do than fighting for a carbon tax? When I went back to it the next day and saw the adjectives, I felt a little better, but not much. I wrote in the margins, “it’s not either/or, it’s both/and.”

It’s a “both/and” as far as building a multi-issue movement. As far as building a climate movement that can prevent climate catastrophe, there is no question that even a “minimal” carbon tax, one that can always be strengthened as the movement keeps building and the extreme weather events keep hitting, is definitely preferable.

Then there is the issue of whether or not, under capitalism, it will be possible for enough to change so that we can have a fighting chance to prevent climate catastrophe. You’re pretty clear throughout your book, Naomi, that you believe it’s either a new economic/political/ social/cultural system with a very different values system or much of life on Earth is cooked. Yet, you hold up what is happening in capitalist Germany and Denmark, as examples of places where hopeful things are happening that should be emulated elsewhere.

You write, on pages 130-131, “The rapid rise of renewables in Germany makes a powerful case for this model [democratically-run, cooperative utilities]. Small, non-corporate players [have been encouraged] to become renewable energy providers—farms, municipalities and hundreds of newly formed coops. That has decentralized not just electrical power, but also political power and wealth: roughly half of Germany’s renewable energy facilities are in the hands of farmers, citizen groups and almost nine hundred energy cooperatives.” Though you later qualify your positive assessment by calling attention to a rise in emissions in Germany in 2012 and 2013, probably because of increased coal use to replace power lost when nukes were shut down, that doesn’t negate the point that positive changes can happen even within capitalism as far as what energy source is used and how those decisions are made.

To me, this is a good thing.

It is also a good thing that there are sectors of the capitalist economy that are in conflict with, or critical of, the dominance of the fossil fuel sector. This is certainly true for the growing, if still small, wind and solar industries. It is true of the insurance industry, which is seeing insurance claims rise as extreme weather events and rising oceans take their toll. It is true of internet companies like Google, eBay and others, as well as a mix of other companies that, for business, public relations or other reasons, see the need to shift to renewable energy.

21st century capitalism is not monolithic, and though the approaches you and I support, Naomi, are certainly different than those of climate-aware corporations, I believe it is helpful to have them on our side, given the very tight time frame we are operating under.

Think about the movement to abolish slavery, which you reference in your last few pages. Slavery didn’t end because of slave rebellions and the Underground Railroad and the abolitionist movement only. Those were all critical, but it ultimately ended because industrialists in the North saw the slave system as a growing threat to their power, and the might of the federal army was used against the plantation owners and the white southerners supporting them who seceded from the union. Abraham Lincoln went to war to “preserve the union,” not to free enslaved Africans, although as the war developed he and those around him felt the need to go further.

We don’t know what all of the components are going to be that, hopefully, historians will write about as far as what led to the demise of the fossil fuel industry and the eventual stabilizing of our destabilized climate. A best-case scenario would be that a popular mass movement arose worldwide which not just forced an end to the fossil fuel era but went on to transform human society in much more democratic and just and loving ways. But that remains to be seen, and one way or the other, we absolutely have to do all we can to get past this profoundly worrying, deepening and serious climate situation we are in right now.

Let me close by saying again, Naomi, how important I believe your book is. My criticism is, I hope, seen as constructive and friendly, and I look forward to working together with you in the coming months and years as we give all we can for our children and future generations to try to bring into being a very different, qualitatively superior world for them to live and thrive in.