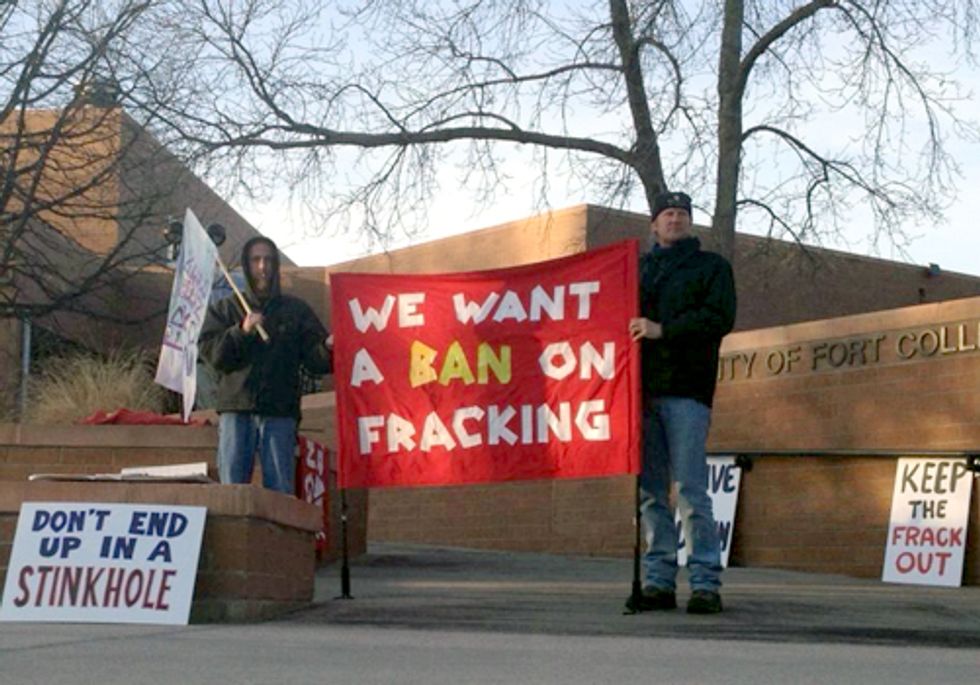 I drove to Fort Collins, Colorado last night to testify in favor of a proposed ban on fracking within that city’s boundaries. When I got there I discovered the Colorado Petroleum Association, the political arm of the industry, had already issued a press release stating the council had passed the ban.

Sure enough, the council, after hearing several hours of citizen testimony voted 5-2 in favor of the ban, causing one activist to mutter in amusement that you just can’t underestimate the power of the industry in this state.

Back in February, at the ban’s first reading, the industry pulled out all the stops. They even imported about 10 young women with fresh scrubbed babies to populate the audience. They all wore pink tee shirts with “Mothers In Love With Fracking” emblazoned on the back. They were nowhere to be seen this time around.

In fact, almost all the people in the packed council chamber spoke in favor of the ban—maybe 75 to 80 in all. Only five or six spoke against it. One was the industry’s lobbyist at the Capital, one hated Arabs, and one was Matt Lepore, the head of the state’s oil and gas commission. He pledged the state’s sincere desire to continue to work with the city. He did not dwell upon Governor Hickenlooper’s intemperate threat to sue the city on behalf of the industry if it dared pass a ban.

The testimony of the citizens was varied, of course. Many worried about their children, some worried about nature, some worried about water, some air, some the climate. One recited a commemorative haiku. One even penned a delightfully appropriate Dr. Seuss poem. In all, the confessions were sometimes labored, sometimes halting, but always sincere, humblingly so.

The council members voting for the ban referred in every instance to their first responsibilities to protect the public’s health, safety and welfare. Mayor pro tem Kelly Ohlson went on to tell the Governor’s representative, Matt Lepore, that his agency had no credibility in his city, that it was the complete captive of the industry. He finished by saying that he would reserve his strongest criticism of the Governor until he could tell him directly.

In the end, the citizens left relieved to know that sometimes democracy still works in America, at least at the local level. Still, a friend of mine remarked as we exited the town hall, “it is sure a hell of a lot of work.” I think that’s what Ben Franklin knew when he warned of the difficulty in keeping a democracy, but on this particular evening most of those people testifying seemed to think it could still be made to work. Fewer might have known of the effort it had taken.