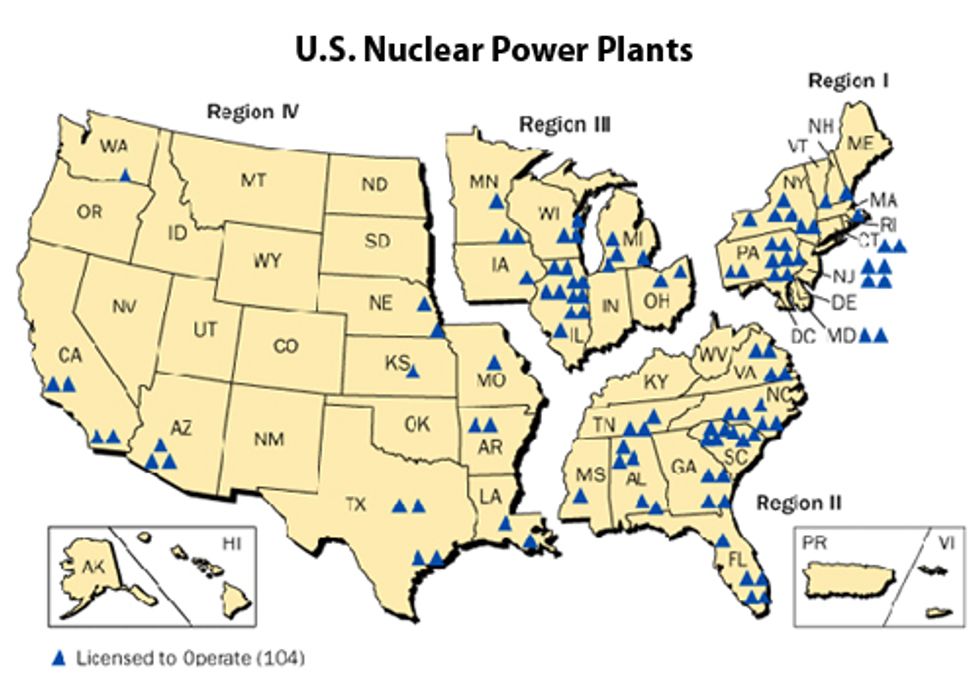 In the wake of this fall's election, the disintegration of America's rust bucket reactor fleet is fast approaching critical mass. Unless our No Nukes movement can get the worst of them shut soon, Barack Obama may be very lucky to get through his second term without a major reactor disaster.

Plunging natural gas prices (due largely to ecologically disastrous fracking) are dumping even fully-amortized U.S. reactors into deep red ink. Wisconsin's Kewaunee will close next year because nobody wants to buy it. A reactor in Clinton, Illinois, may join it. Should gas prices stay low, the trickle of shut-downs will turn into a flood.

But more disturbing are the structural problems, made ever-more dangerous by slashed maintenance budgets.

Projected completion of a second unit at Watts Bar, Tennessee, where construction began in the 1960s, has been pushed back to April, 2015. If finished at all, building this reactor may span a half-century.

Two new reactors under preliminary construction in South Carolina have been plagued by delays and cost overruns. Faulty components and concrete have marred two more under construction at Vogtle, Georgia, where builders may soon ask for a new delay on consideration of proposed federal loan guarantees.

This fall's defeat of the very pro-nuclear Mitt Romney is an industry set-back. The return of Harry Reid (D-NV) as Senate Majority Leader means the failed Yucca Mountain waste dump will stay dead. A number of new Congressionals are notably pro-green, in line with Obama's strong rhetorical support.

The move toward renewables has been boosted by Germany's shut-down of eight reactors and huge investments in wind, solar and other renewables, which are exceeding financial and ecological expectations. Despite pro-nuke nay-sayers, Germany's energy supply of energy has risen while prices have fallen.

The Department of Energy has confirmed that U.S. solar power continues to drop in price. U.S. employment in the solar industry has surged past 118,000, a rise of more than 13 percent over last year.

Despite a wide range of financial problems, including uncertainty over renewal of the wind Production Tax Credit, the green energy industry continues to expand. Along with marijuana, Colorado has now legalized industrial hemp, opening the door for a major bio-fuel that will have strong agricultural support.

At some near-term tipping point, the financial and political clout of the green energy industry will fly past that of atomic power.

But at Fukushima, a spent fuel pool crammed with some 1,500 hugely radioactive rods still sits atop a deteriorating shell that could collapse with the inevitable upcoming earthquake. As the Earth hangs in the balance, the pool may or may not be emptied this coming year, depending on the dubious technical and financial capabilities of its owners, who are in a deep fiscal crater. Meanwhile, fish irradiated by the huge quantities of Fukushima emissions are being consumed here in the U.S.

Overall, the "nuclear renaissance" is in shambles. So is an industry now defined by a rust-bucket fleet of decayed reactors in serious decline.

Solartopians everywhere can celebrate an election that seemed to show some progress toward saving our beleaguered planet, but our survival still depends on shutting all these old reactors before the next Fukushima contaminates us with far more than just radioactive fish.