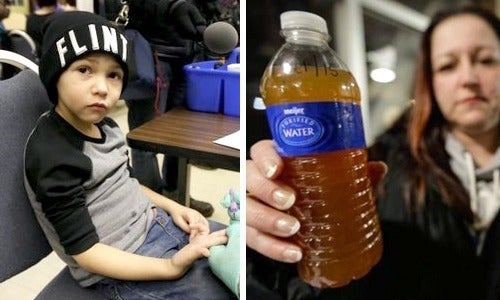 Flint’s water crisis has dominated headlines in the past month, as more and more details of the “man-made disaster” continue to come to light each day. But Flint is “just the tip of the iceberg,” as famed environmental activist Erin Brockovich put it in an interview with Stephen Colbert last week.

According to a Washington Post article published Thursday, an “untold” number of U.S. cities have higher rates of lead poisoning than Flint.

Data collected by the Centers for Disease Control and Prevention [CDC] shows that over 40 percent of the states that reported lead test results in 2014 have higher rates of lead poisoning among children than Flint.

In Flint, 4 percent of kids aged five and under tested with blood-lead levels of at least five micrograms per deciliter, the threshold of lead intake that necessitates public health action, as defined by the federal government.

Elsewhere in the country, 12 states reported that a greater percentage of kids under six years old met or surpassed that threshold. The most egregious example is Pennsylvania, where 8.5 percent of the children tested were found to have dangerously high levels of lead in their blood.

And the problem could be much worse because very few children have even been tested for elevated lead levels.

Only 27 states (including Washington, DC) reported childhood blood lead surveillance results to the CDC’s national database for 2014, the most recent statistical set available.

These represent just a slice of the infant population. In Texas, for instance, only 184 kids were tested for lead poisoning. The state’s population of kids under six exceeds 2 million.

On the federal level, then, there is no comprehensive understanding of the extent to which the population is being exposed to hazardous amounts of lead. While the percentage of children with more than 5 micrograms per deciliter of lead has been steadily declining, the CDC says no blood-lead level in children has been determined to be “safe.”

Flint may have in recent months become synonymous with lead contamination in America, but it is by no means the only—or the most extreme —example of how the toxic element can make its way into our bodies.

“And those are only the children who get tested,” the Plain Dealer said. “Most don’t get screened for the toxin, recommended for all kids under the age of six because of the high prevalence of lead paint in the city’s housing.”

Experts say the most common source of lead poisoning is lead-based paints, which can be found in older homes across the country.