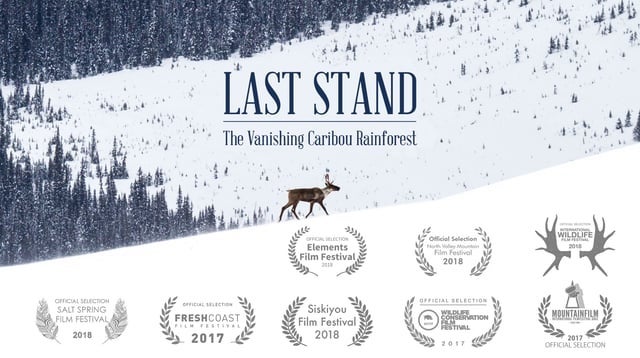 Most people associate reindeer with the North Pole. And it’s true, the animals also known as caribou tend to live in remote, wintry landscapes most Americans will never see. But did you know that caribou once roamed as far south as Minnesota, Michigan, Vermont and New York? And that the Selkirk woodland caribou herd still spends part of each year in Idaho and Washington?

Well, three of them do. Because that is all that remains of the Selkirks. By next week, next month or next year, the Lower 48’s last remaining reindeer could be gone forever, making a sad irony of the animal’s nickname, the “gray ghost.”

Several kinds of caribou inhabit the world’s northern stretches (see “Mapping a Future for Boreal Caribou“), but the ones that spend time in the Pacific Northwest belong to an endangered subspecies commonly known as woodland caribou. This spring, aerial surveys confirmed that only three females remain in the Selkirk herd, named for the mountains that span the border between British Columbia and Washington. There were around 12 individuals in 2016, down from 50 in 2009.

Even if each of the Selkirk trio is pregnant—and there’s no evidence to suggest that this is true—the herd is a whisper away from disappearing forever.

Worse still, just two weeks after the approaching demise of the Selkirk herd became public, researchers announced that another group, known as the South Purcells herd, found a bit to the north in British Columbia, are in similar straits. Aerial counts identified just four individuals (three females and a male), where last year there were 16. “When you get in a situation of such small herds, it’s not unusual to expect a dramatic decline at some point,” said Chris Johnson, a wildlife ecologist at the University of Northern British Columbia.

Sadly, this is not the first time a caribou herd has died out. Over the past decade, Johnson, who lives in the city of Prince George, watched this happen with two other caribou herds practically in his own backyard. “We saw it coming,” he said. “They got smaller, smaller, smaller. And then you go and do a survey, and it’s like, ‘Hey, look at that. They’re gone.'”

A similar fate befell the woodland caribou herd in Alberta’s Banff National Park. The herd dwindled to a point where a single avalanche wiped out its last remaining members in 2009. Poof.

The losses aren’t so surprising, said Candace Batycki, a program director for the Yellowstone to Yukon Conservation Initiative, given what the animals face as they travel across their range. Their fate is the culmination of several ecological threats—deforestation, habitat fragmentation, climate change—occurring across Canada. “Here we have an animal that roams around, uses different habitats, is always on the move, doesn’t really do well with roads, needs old growth forests, and is very, very shy,” she said.

Woodland caribou once enjoyed the protection that dense forestlands provided them from wolves and mountain lions. The subspecies ranges about in much smaller groups than their cousins on the tundra, which roll hundreds of thousands deep on the open plains. This makes snagging a woodland caribou as a snack much more difficult, and the animals’ ability to forage through deep snow dissuades many predators from even bothering with them.

But these days, timber, mining, and oil and gas operations have punched holes in the gray ghosts’ habitat, letting in competitors like moose and deer as well as predators. According to the Canadian Association of Petroleum Producers, as much as 70 percent of Alberta’s oil sands reserves are found within caribou habitats. In 2014, the Canadian government enacted a species recovery plan that set aside more than five million acres of mountainous caribou habitat. Unfortunately, Johnson said, the valleys below these high mountain escapes are “really chopped up” by logging and residential areas. Protecting large expanses of boreal forest, however, is definitely a step in the right direction, especially since other conservation approaches are falling short.

As the habitat degradation continues, some other strategies have tried to help woodland caribou by actively removing predators from their habitat and by capturing and relocating pregnant females into maternity pens, which provide some safety until the offspring are big and strong enough for the wild. Maternity pens, however, are labor- and resource-intensive affairs—and are not sure bets. The whole catch-and-release process can jack up the animals’ stress levels, which may cause low birth weights. In 2014, just two out of nine calves survived their time in a pen in Revelstoke, Canada. In 2016, that number rose to four out of ten. While those odds may still beat the 20 percent to 25 percent survival rate calves experience in the wild, at least one environmental group said the pens cause more harm than good.

Of course, setting up maternity pens for the Selkirk herd at this point would be like rearranging deck chairs on the Titanic. Sadly, unless the herd is combined with another—an idea that has received a fair amount of talk for years—its three remaining females will be the last woodland caribou to tread below the Canadian border.

But the Selkirks and other lost woodland herds needn’t die out for nothing. Their losses send a message on how to save the rest of their kind, the continent’s remaining 51 woodland caribou herds. Their survival requires intact forests within which to roam, hide, and thrive. The answer, in fact, is quite obvious. Woodland caribou need woodlands.