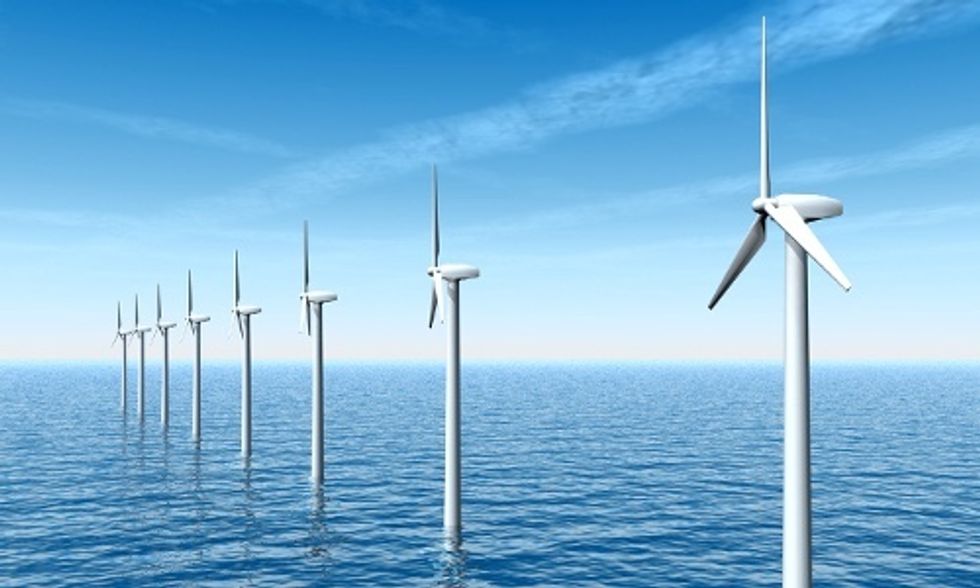 America's smallest state claimed a big spot in the country's renewable energy development history. Monday Deepwater Wind broke ground on the country's first offshore wind project, which will be built at Block Island, Rhode Island. The five turbines will produce 30 megawatts of power, enough to provide electricity to all the homes and businesses on the island as well as send power to the mainland through an undersea cable. The project, which will be operative next year, is expected to create 300 construction jobs.

There are thousands of offshore wind turbines in northern Europe, but the new wind farm in the ocean off Rhode Island will be the first in the U.S.
Photo credit: Shutterstock

“The importance of this day cannot be overstated," said Emily Norton, director of the Massachusetts chapter of the Sierra Club. “The Block Island Wind Farm is our Apollo 11 moment. I am going to remember this day, and tell my kids and grandkids that I was there when the first U.S. offshore wind farm was built—that when we had a choice between bequeathing them a future powered by polluting fossil fuels that lead to extreme storms, heat waves and drought, we chose to power their future from the wind and the sun and smart technologies.”

The Sierra Club was one of a number of groups that lobbied for the project, including the National Audubon Society, National Wildlife Federation and labor unions, when it was first proposed in 2009. They helped mitigate concerns that construction could disrupt whales and other marine life and that the turbines could be a threat to seabirds.

Numerous officials and supporters were on hand for the Monday groundbreaking. They included Rhode Island Gov. Gina Raimondo and Sen. Sheldon Whitehouse, a passionate advocate for clean energy who has made a weekly floor speech in the Senate on the climate under the banner "Time to Wake Up" for two and a half years.

“The Block Island Wind Farm will bring cleaner and more affordable energy to Block Island’s residents while helping Rhode Island access the tremendous economic and environmental potential of our offshore wind,” said Sen. Whitehouse when the project was cleared to begin. “It’s a milestone in our nation’s transition to a clean energy economy, and I’m proud that Rhode Island is leading the way.”

"Not only are we going to create jobs, but we're going to rebrand ourselves as being more innovative and over time make Rhode Island a place that has lower energy costs, more diversified energy supply and greener energy," said Gov. Raimondo at the groundbreaking.

The project is small compared to the offshore wind farms that are abundant in northern Europe, but clean energy advocates hope the construction of the Rhode Island farm will create some momentum. The Bureau of Ocean Energy Management has opened nearly 750,000 acres of ocean to offshore wind development, designating it as a wind management area, with the potential to create up to 9,000 megawatts of electricity enough to power 700,000 homes by 2030.

Yet until now, that development has been stalled. The Cape Wind Project in Massachusetts has been embattled for more than a decade. Among those fighting it is billionaire Bill Koch, who lives on Massachusetts' Nantucket Sound and is co-chair of the Alliance to Protect Nantucket Sound. His brothers are fossil fuel barons and major political funders of climate denier politicians and initiatives Charles & David Koch. While the project was ultimately given the go-ahead, despite court challenges, the two utilities that had power purchase agreements with the project withdrew them in January. That project was expected to the first in the country, but now Rhode Island has beaten it to the punch.

“We are proud to celebrate breaking ground on the nation's first offshore wind farm in Rhode Island as it brings local, clean power to all Block Island residents and 300 new jobs to the community,” said Bruce Nilles, senior campaign director of the Sierra Club's Beyond Coal Campaign.

“However, this celebration is about something bigger: it highlights the nation's transition beyond dirty, outdated fossil fuels to affordable clean energy. This is a shining example of how American ingenuity can take us forward and position us as leaders in the global clean energy economy. Today on Block Island, we again prove that America can be a leader in creating a clean energy reality that ensures every person can breathe clean air, enjoy clean water and live in a world free from the threat of climate disruption.”