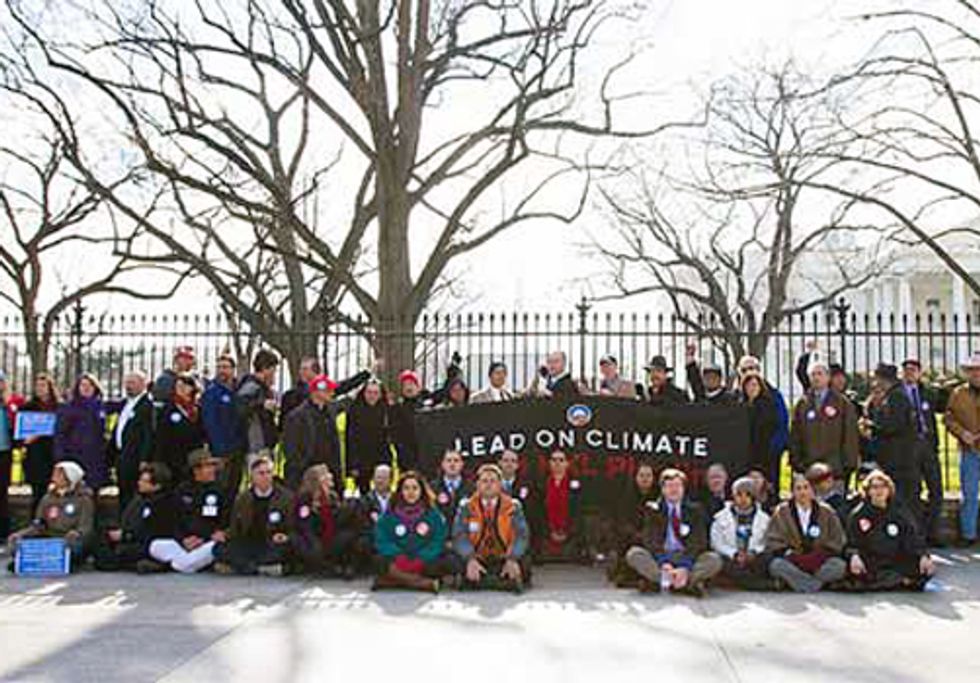 This Sunday, a new environmental movement will arrive in Washington, D.C. Thousands of people will join 350.org, Sierra Club and the Hip Hop Caucus' Forward on Climate rally to call out with one voice and demand Obama keep his promise to future generations.

I will be proud to be there with them.

If you're coming to D.C. this weekend, you won't see your parents' environmental movement here on the Mall. The climate crisis has forged a new, diverse coalition of Americans who have seen the effects of our fossil fuel dependency and want no future with it.

Drought-stricken farmers in Iowa get it. Homeowners from the Jersey Shore get it. Eroding Alaskan native communities get it. Flooded families in New Orleans get it. They will all be part of thousands of people here on Sunday who get it—America's energy past is dead in the ground. Our energy future is in the air, with wind, solar and other renewable energy sources. The Keystone XL pipeline, which would bring dirty tar sands oil from Canada through the U.S. for export, will lead only to further darkness.

Millions of people around the country have lived the effects of climate change and now share this vision of the future. We all cheered President Obama's spirited call to action in his inaugural address—"We will respond to the threat of climate change, knowing that the failure to do so would betray our children and future generations"—and we hope he keeps his word. But we know that powerful interests want these words to simply be empty rhetoric.

Through the battles of Obama's first four years, progressive groups have learned what works and what doesn't in the fight against corporate power. Our labor, civil rights and environmental partners in the newly begun Democracy Initiative are determined to advance the progressive cause with shared vision. So while green groups fought hard for a climate bill in 2010 and lost, we learned valuable lessons that we can use along with the lessons other progressives learned in their victory with the health care bill. We all know we need public opinion, institutional advocacy, and, perhaps most importantly, grassroots-led peaceful protest to achieve any real change. This Forward on Climate rally is the first, significant step for progressive groups during Obama's second term, the next four years that may well prove to be the most important years we have had yet in the environmental movement.

Why? Because Obama's decision on the Keystone XL pipeline—along with Arctic drilling, coal exports, and the rest of the fossil fuel-based projects in his "all of the above" energy strategy—will determine whether or not the U.S. is locked into a climate death spiral or has a plausible way out. Letting the Keystone project go forward would be a clear, savage betrayal of our children and future generations. We can't let that happen, and we must let Obama know he will be held accountable.

Tar sands oil extraction is just one example of how far down the road we've let corporate power lead us while it pursued dirty energy profits at the planet's expense. For decades, most of America remained relatively oblivious to what was happening, but now that easy access to oil has gone the way of the dinosaur and billion dollar companies must go either to the ends of the earth or to the bowels of hell to get what's left, we're beginning to wake up. We're starting to realize oil companies won't stop until every last drop of fossil fuel is extracted and burned, a process that will destroy the rest of the planet if we don't make this change right now.

Thankfully, America has shown it's ready. This President's Day weekend, I hope you will join me and this new environmental movement in showing Obama that America honors leaders, not politicians. The president's legacy for future generations rests on the climate decisions he can make right now.