Americans Speak Out Against Stripping Federal Protections From Wolves 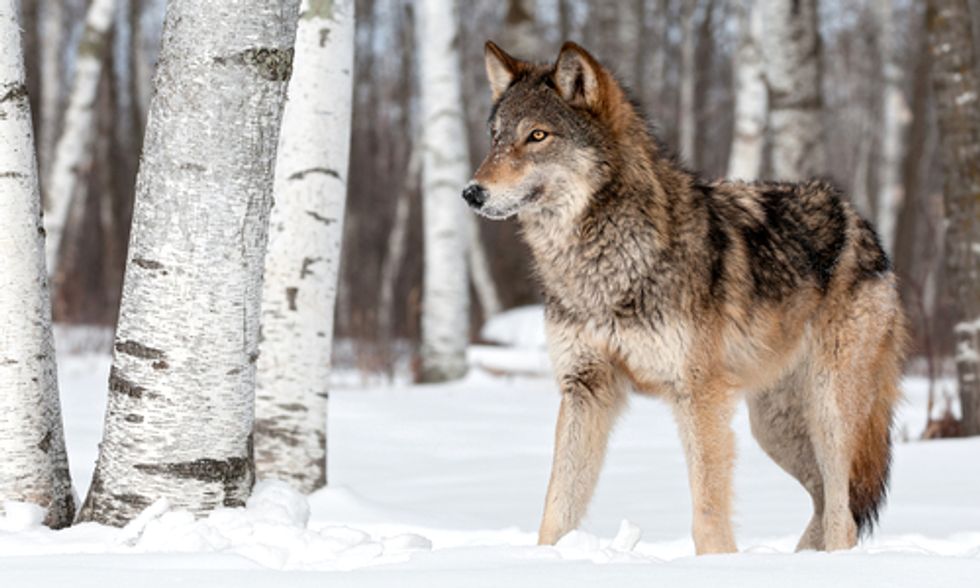 Approximately one million Americans stated their opposition to the Obama Administration’s proposal to strip endangered species protections from gray wolves in a comment period that closed today. This is one of the largest numbers of comments ever submitted on a federal decision involving endangered species and reflects broad dissatisfaction with the Obama Administration’s politically driven move to turn wolf management over to states across most of the lower 48.

Populations are at roughly 5,500 wolves in the continental U.S.—a fraction of the species’ historic numbers.
Photo courtesy of Shutterstock

“Americans overwhelmingly oppose removing protections for wolves, and for good reason—wolves have recovered to just a fraction of their range and are severely threatened by state-sanctioned hunts intended to decimate them,” said Kierán Suckling, executive director at the Center for Biological Diversity. “We hope the Obama Administration will hear the pleas of hundreds of thousands of citizens and maintain these still critically needed protections for wolves.”

“Anti-wolf sentiments nearly led to the extermination of America’s wolves, and just when populations are starting to bounce back, the federal government is considering a plan that could place them in jeopardy," said Nicole Paquette, vice president of Wildlife Protection for The Humane Society of the U.S. "Rather than catering to interests from trophy hunters and fear mongering, we hope the federal government rejects this proposal and works towards the recovery of this species.”

The 750,000 plus comments, being delivered today to the U.S. Fish and Wildlife Service by multiple conservation groups, will bring the total number to more than one million.

“The incredible volume of comments give voice to a sad fact: the delisting proposal is a radical departure from the optimism and courage we need to promote endangered species recovery in this country," said Defenders of Wildlife President Jamie Rappaport Clark. "The comments show that Americans believe the Fish and Wildlife Service’s proposal falls well short of the conservation ideals this country stood for 40 years ago when the Endangered Species Act was signed.”

“The restoration of the gray wolf could be one of the great American wildlife conservation success stories if Secretary Jewel would just finish the job,” said Leda Huta, executive director of the Endangered Species Coalition.

There were once up to two million gray wolves living in North America, but the animals had been driven to near-extinction in the lower 48 states by the early 1900s. After passage of the federal Endangered Species Act in 1973 and protection of the wolf as endangered, federal recovery programs resulted in the rebound of wolf populations in limited parts of the country. Roughly 5,500 wolves currently live in the continental U.S.—a fraction of the species’ historic numbers.

"You don't spend 40 years nursing a species back from the brink of extinction, only to suddenly declare 'open season' on them," said Drew Hudson, Environmental Action. "There are only a few dozen viable packs in an area that used to be home to over a millions wolves. There's plenty of room in America for wolves, people and an abundance of other species. But If Secretary Jewell allows this plan to go ahead, she'll be responsible for the destruction of one of the most amazing, intelligent and iconic species in America."

“The North American gray wolf’s recovery in certain areas of the U.S. is something to celebrate, but an abundance of evidence shows the work is not yet complete,” said International Fund for Animal Welfare President and CEO Azzedine Downes. “I applaud actions to help protect this critical species, and I strongly urge the U.S. Fish and Wildlife Service to not go through with this proposal.”

The Obama Administration’s proposal would remove existing protections for wolves everywhere except Arizona and New Mexico, where the Mexican wolf is struggling to survive with an estimated population of just 75 wolves. This proposal would abandon protections for wolves in places where wolf recovery is just in its infancy, such as Oregon and Washington, and would prevent wolves from recovering in other places where good wolf habitat has been identified, including northern California, the southern Rocky Mountains and the Northeast.

“Oregon wolves have taken the first tentative steps towards recovery in the last few years," said Sean Stevens, executive director with Oregon Wild. "If the Obama Administration takes away the strong protections of the Endangered Species Act, we pull the rug out from the fragile success story here on the West Coast and leave the fate of wolves in the hands of state agencies in Idaho, Montana and Wyoming who have proven incapable of balanced management."

"Americans are outraged and hundreds of thousands are saying it loudly and clearly; the job of wolf recovery is not done," said John Horning Executive Director of WildEarth Guardians. "The Fish and Wildlife Service is not only wildlife wrong on the science of wolf recovery but also wildly out of step with the desires of most Americans who want to see federal protections for wolves maintained."