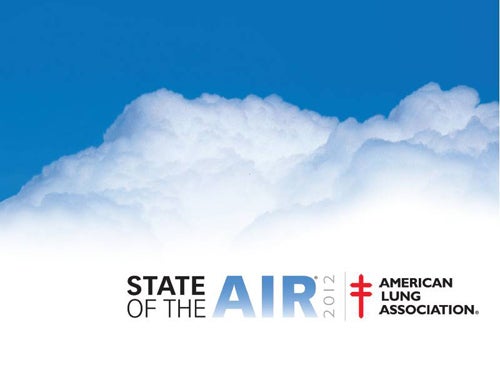 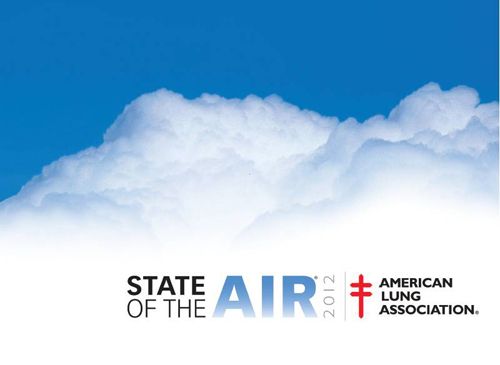 The American Lung Association’s State of the Air 2012 report released on April 25 finds that in America’s most polluted cities, air quality was at its cleanest since the organization’s annual report began 13 years ago. This year’s report details the trend that standards set under the Clean Air Act to cleanup major air pollution sources—including coal-fired power plants, diesel engines and SUVs—are working to drastically cut ozone (smog) and particle pollution (soot) from the air we breathe. Despite this progress, unhealthy levels of air pollution still exist and in some parts of the country worsened.

“State of the Air shows that we’re making real and steady progress in cutting dangerous pollution from the air we breathe,” said Charles D. Connor, American Lung Association president and CEO. “We owe this to the ongoing protection of the Clean Air Act. But despite these improvements, America’s air quality standards are woefully outdated, and unhealthy levels of air pollution still exist across the nation, putting the health of millions of Americans at stake.”

The job of cleaning the air is not finished. More than 40 percent of people in the U.S. live in areas where air pollution continues to threaten their health. That means more than 127 million people are living in counties with dangerous levels of either ozone or particle pollution that can cause wheezing and coughing, asthma attacks, heart attacks and premature death. Those at greatest risk from air pollution include infants, children, older adults, anyone with lung diseases like asthma, people with heart disease or diabetes, people with low incomes and anyone who works or exercises outdoors.

The Lung Association’s annual air quality report grades cities and counties based, in part, on the color-coded Air Quality Index developed by the U.S. Environmental Protection Agency (EPA) to alert the public to daily unhealthy air conditions. The 13th annual report uses the most recent, quality-controlled EPA data collected from 2008 through 2010 from official monitors for ozone and particle pollution, the two most widespread types of air pollution. Counties are graded for ozone, year-round particle pollution and short-term particle pollution levels. The report also uses EPA’s calculations for year-round particle levels.

Major improvements were seen in 18 of the 25 cities most polluted by ozone, including Los Angeles, which had the lowest smog levels since the report was first published in 2000. Los Angeles, Pittsburgh and Cincinnati were among 17 of the 25 cities most polluted by annual particle pollution that experienced their cleanest years yet. Four cities—Pittsburgh, San Diego, Philadelphia and Visalia, Calif., had their lowest-ever, short-term particle pollution level. For the first time, Birmingham, Ala., Detroit, Mich., and York, Pa., dropped completely off the report’s 25 most-polluted cities lists. Santa Fe, N.M., ranked as the cleanest city in the nation.

Meanwhile, State of the Air 2012 finds that nearly four out of 10 people in the U.S. live in counties that received an F for air quality because of unhealthy levels of ozone air pollution, which can cause health problems that day, and even days after. When inhaled, ozone irritates the lungs, like a bad sunburn, and can cause wheezing, coughing, asthma attacks and can shorten life.

The report also finds that nearly 50 million Americans live in counties with too many unhealthy spikes in particle pollution levels, and nearly six million people live in areas with unhealthy year-round levels of particle pollution. Particle pollution is the most dangerous and deadly widespread air pollutant in America. This noxious mix of microscopic bits of ash, soot, diesel exhaust, chemicals, metals and aerosols can lead to early death, heart attacks, strokes and emergency room visits. Only eight counties received a failing grade for year-round particle pollution, further evidence of the continuing improvement even since last year’s report.

The trend toward cleaner air continued throughout this three-year period, even as the economy, energy use and driving began to rebound after the recession in 2008-2009. The reduced emissions result from standards set under the Clean Air Act since the late 1990s that have driven continued cleanup of coal-fired power plants and the turnover of the fleet of older, dirtier SUVs, pick-up trucks, vans and diesel engines.

The Ongoing Fight to Defend the Clean Air Act

Although these air quality improvements clearly result from standards put into place under the Clean Air Act, big polluters and some members of Congress continue to propose to dismantle the law. Recent proposals in the Congress have included delaying implementation and blocking enforcement of parts of the law, and limiting EPA’s ability to consider all of the scientific evidence regarding the harm to public health. These challenges come despite EPA’s estimate that cutting air pollution through the Clean Air Act will prevent at least 230,000 deaths and save $2 trillion annually by 2020.

“We still need to fulfill the promise of clean, healthy air for everyone, and that can only become a reality through the full implementation of the Clean Air Act. The American Lung Association strongly opposes any efforts to weaken, delay, or undermine the protective standards the law provides,” said Connor.

The American people support the need for stricter limits on air pollution standards and the authority of the EPA to enforce these standards. A recent bipartisan survey found that about two-thirds of voters (66 percent) favor the EPA updating air pollution standards by setting stricter limits. Nearly three quarters (73 percent) of voters believe the nation does not have to choose between air quality and a strong economy.

“The American Lung Association has been leading the fight for clean air for decades, and we are as determined as ever to give every American the clean air they deserve to breathe every day,” said Connor.

To see how your community ranks in State of the Air 2012, to learn how to protect yourself and your family from air pollution, and to join the fight for healthy air, visit www.stateoftheair.org.