The best of EcoWatch, right in your inbox. Sign up for our email newsletter!
climate crisis

The Guardian
Oct. 28, 2021 09:20AM EST Insights + Opinion
'The nation's worst polluters managed to evade accountability and scrutiny for decades as they helped the fossil fuel industry destroy our planet.' Illustration: Jason Goad / The Guardian

For too long, Americans were fed a false narrative that they should feel individually guilty about the climate crisis. The reality is that only a handful of powerful individuals bear the personal responsibility.

The nation's worst polluters managed to evade accountability and scrutiny for decades as they helped the fossil fuel industry destroy our planet. The actions of these climate supervillains have affected millions of people, disproportionately hurting the vulnerable who have done the least to contribute to global emissions.

Working- and middle-class people must stop blaming themselves for the climate crisis. Instead, it's time to band together to seek justice and hold these profiteers accountable. Only in calling out their power and culpability is it possible to reclaim the world that belongs to all of us, together. 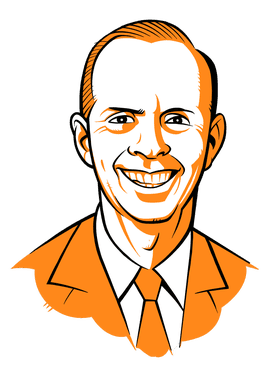 Chairman of the board and CEO of Chevron

Mike Wirth captains Chevron, a notorious corporate polluter responsible for one of the highest total carbon emissions of any private company worldwide.

Under Wirth's direction, Chevron has pursued several greenwashing tactics to downplay the company's environmental impact. A coalition of environmental groups filed a Federal Trade Commission complaint against Chevron earlier this year saying it misled the public by claiming responsibility only for carbon emissions associated with refining and transporting oil, not the total emissions created by the product it sells.

Wirth also sits on the board of the American Petroleum Institute, an oil industry trade group with a long track record of spreading climate denial and delaying legislative efforts to curb carbon emissions.

In his own words: "Let them plant trees." 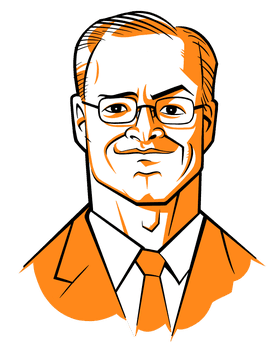 Chairman of the board and CEO of Exxon

ExxonMobil is publicly known as one of the first oil companies to become aware of climate change, more than 40 years ago. Still, Exxon spent millions of dollars spreading climate denial while simultaneously contributing the fourth largest amount of carbon emissions of any investor-owned company in the world.

Woods, who has been with the company since 1992, makes more than $20 million a year. And though he expressed support for the 2015 Paris agreement to substantially reduce global pollution, leaked documents showed his plan for the company to increase its emissions by 17% through 2025.

Earlier this year, Exxon lobbyists were captured on video revealing the company's efforts to obstruct climate legislation in Congress. Woods later tried to distance himself and the company from the lobbyists, saying they "in no way represent" Exxon's position.

In his own words: Woods once called carbon reduction standards "a beauty match, a beauty competition." 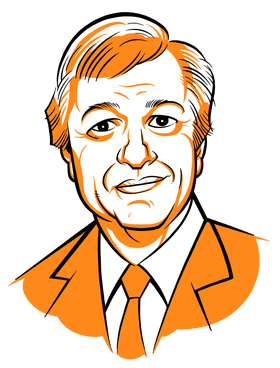 Billionaire Jamie Dimon is top dog at JP Morgan Chase, which has provided $317 billion in fossil fuel financing – 33% more than any other bank – since the Paris agreement was adopted in 2015. Under Dimon, Chase has also funneled more than $2 billion into tar sands projects between 2016 and 2019.

When Chase's managing director, Greg Determann, was asked early this year if the company would still lend to oil and gas companies despite the worsening climate crisis, Determann replied: "'Mr. Dimon is quite focused on the industry. It's a huge business for us and that's going to be the case for decades to come."

In his own words: "The solution is not as simple as walking away from fossil fuels." 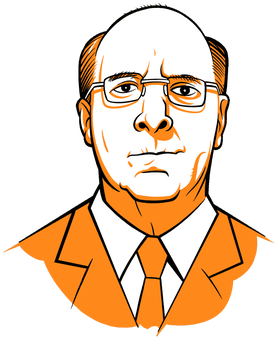 As the chief executive of BlackRock, Fink oversees one of the world's largest fossil fuel investment portfolios, with $87 billion behind the industry.

And though Fink has made sweeping climate promises and even wrote an op-ed about achieving a "net-zero" world, his company has profited off deforestation – a major cause of rising emissions – more than any other company globally.

Fink has also pushed BlackRock to vote against pro-climate action shareholder resolutions – all while angling for money from the federal government that should go to climate projects.

In his own words: "Without global action, every nation will bear enormous costs from a warming planet, including damage from more frequent natural disasters and supply-chain failures." 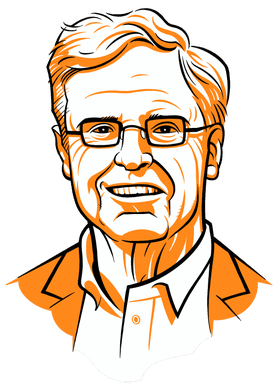 Chairman and CEO of Koch Industries

Alongside his now-deceased brother David, Charles Koch has a lengthy résumé of climate malfeasance. The multibillionaire is the longtime head of Koch Industries, a refining, petrochemical and pipeline company labeled by Greenpeace as a "kingpin of climate denial."

The Kochs, and particularly Charles, moved early to politicize climate change. Charles founded and funded the Cato Institute, a libertarian think tank known to coordinate and distribute climate denial, which became the first organization to stoke the ideological divide on the climate crisis. Koch Industries went on to spend nearly $150 million financing climate denial groups between 1997 and 2018 alone.

Since his brother's death, Charles has attempted to backtrack on his legacy of sowing hyper-partisan division. But according to OpenSecrets, Koch Industries is the top spender ($5.6 million) on annual lobbying on oil and gas so far this year. 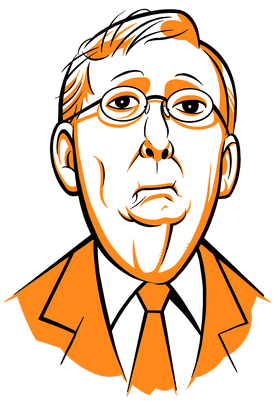 Mitch McConnell admitted to believing in human-caused climate change only in 2020. He is also the chief architect of ongoing Republican obstructionism. Under President Obama, whose climate actions he smeared as a "war on coal," McConnell used the filibuster to block even tepid climate reforms supported by a majority of Americans.

Under Trump, McConnell nuked the judicial filibuster in order to put three anti-science, pro-corporate justices on the Supreme Court, including Amy Coney-Barrett, who maintains deep family ties to big oil (her father worked at Shell for decades). And now, McConnell is ensuring that 100% of Republicans will vote against all of Biden's climate agenda.

McConnell is also heavily funded by the fossil fuel industry, to the tune of more than $3 million over the course of his infamous career.

In his own words: "I'm not a scientist." 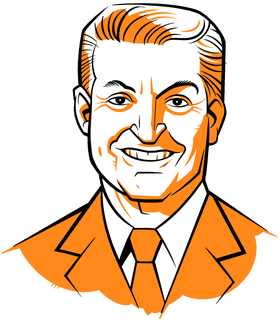 Today, Joe Manchin is most famous for being a swing vote for important legislation, but the real story is how the fossil fuel industry made him mega-wealthy through two coal companies he founded in the 1980s.

While even coalminers in his home state of West Virginia support a Green New Deal, Manchin uses his position to hold climate legislation hostage on behalf of the fossil fuel industry – which he is doing by threatening to vote against Biden's Build Back Better climate agenda. The Exxon lobbyists caught on tape earlier this year specifically identified Manchin as "their guy," and said they meet with him several times a week.

According to OpenSecrets, Manchin takes more money from the fossil fuel industry than any other Democrat.

In his own words: "If you're sticking your head in the sand, and saying that fossil [fuel] has to be eliminated in America... and thinking that's going to clean up the global climate, it won't clean it up at all. If anything, it would be worse." 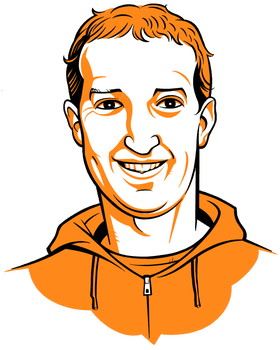 Last year, pro-fossil fuel Facebook ads were viewed 431 million times. In just the first half of 2020, ads on Facebook calling climate change a hoax were viewed at least 8 million times in the United States alone.

In 2019, an article falsely attributing climate change to Earth's solar orbit went viral, accumulating millions of views without intervention by the company. And this year, one report found that in just the first two months of 2021, Facebook spread climate denial to more than 25 million people, including posts about wind turbines being to blame after Texas froze over in February.

In his own words: "Move fast and break things. Unless you are breaking stuff, you are not moving fast enough." 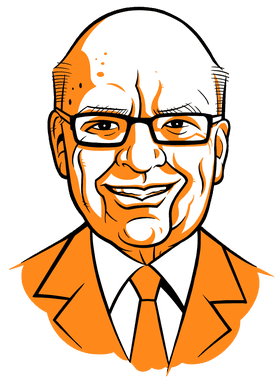 The father of international media conglomerate News Corp and the CEO of Fox News, the Wall Street Journal, and many other outlets, Australian American tycoon Rupert Murdoch has overseen his companies' rampant spreading of misinformation and climate denial for decades, netting him over $23 billion.

Although Murdoch has claimed his company does not support climate denial, his news outlets have published article after article sowing doubt in climate science. Meanwhile, as of 2019, more than 80% of climate coverage on Fox News was steeped in denial, according to an analysis by the consumer advocacy organization Public Citizen.

In his own words: "Climate change has been going on as long as the planet is here, and there will always be a little bit of it." 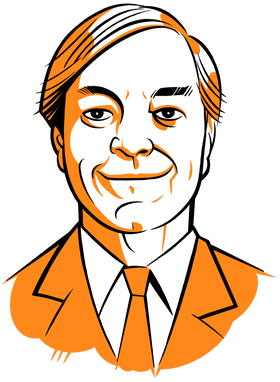 Rainforests are the most important climate regulators in the world. But Cargill, a global food corporation helmed by MacLennan, has a profit model based on rainforest destruction caused by soy and beef production, particularly in the Amazon.

MacLennan has been in charge of the company's global strategy since 2013. He was calling the shots when, in 2019, former congressman Henry Waxman called Cargill the "worst company in the world," referring to its track record on deforestation.

Thanks to public pressure, Cargill did recently declare a moratorium on buying agricultural products from illegally cleared rainforest, but there is evidence that under MacLennan's leadership, the company is already ignoring its own commitment.

In his own words: When asked why Cargill wasn't eliminating deforestation from its supply chain: "The supply chains in Brazil are very complicated." 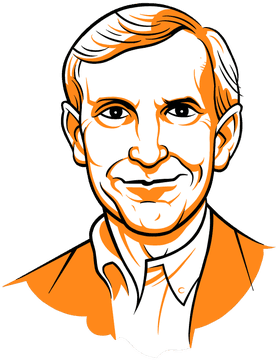 Edelman heads the global communications firm Edelman PR, which made tens of millions of dollars over the years by working with fossil fuel companies. His firm has created multi-pronged PR, advertising and lobbying campaigns with ExxonMobil, TransCanada, the American Petroleum Institute and Shell – prompting high-profile clients and executives to leave over the firm's work peddling climate denial.

Tax filings show that since that 2015 announcement, the firm has raked in $12 million for its work with the American Fuel and Petrochemical Manufacturers alone, whose most recent focus has been increasing criminal penalties for pipeline protesters.

In his own words: "I'm proud of what our firm is doing to build a house of trust through our mission, values, and actions." 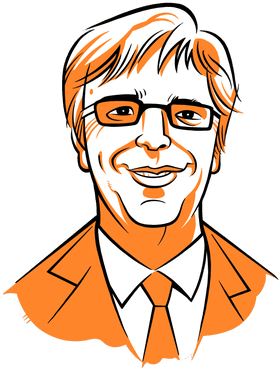 As Chevron's lead attorney and the main spokesman for all the oil companies in some two dozen climate liability cases, Boutrous sets the agenda in answering to the fossil fuel industry's decades of lies about climate change. His argument before the courts hinges on the idea that every person shares equal blame for the climate crisis, and that it's "counterproductive" to hold the fossil fuel industry particularly responsible.

Law Students for Climate Accountability rates Gibson Dunn among the worst of the worst on its climate scorecard for having the second-highest amount of fossil fuel litigation work of all 26 firms the group evaluated.

In his own words: "Chevron is a great company and great client with a strong culture of social responsibility."