'America Is Not a Planet': The Only Accurate Thing Said About Climate Change at GOP Debate 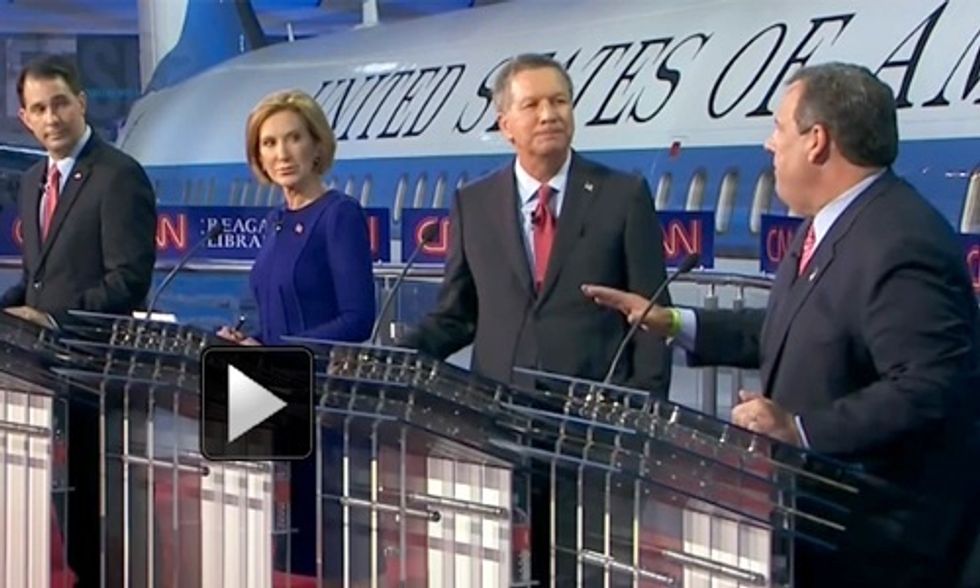 Unlike last month's GOP primary debate, where climate change was not mentioned at all during the prime time debate and only briefly mentioned in the so-called "happy hour" debate, the topic finally received some airtime at last night's debate. Held at the Ronald Reagan Presidential Library in Simi Valley, California, the debate was hosted by CNN. Over the course of the three-hour debate, there was one question on climate change. It lasted about four minutes, which is only slightly longer than the amount of time devoted to candidates picking out their secret service names.

"We received a lot of questions from social media about climate change," says CNN moderator Jake Tapper. One group, NextGen Climate pushed very hard ahead of the debate for the candidates to talk about climate change. They rolled out a three-figure ad campaign ahead of the debate, invoking Ronald Reagan's "Common Sense" speech to urge CNN moderator Jake Tapper to ask candidates how they would address climate change—specifically what their plans are to get the country to 50 percent renewables by 2030.

While Tapper failed to ask them about their renewable energy plan, he did quote Ronald Reagan's Sec. of State George Schultz in asking the candidates the following question:

Schultz reminds us that when Ronald Reagan was president, he faced a similar situation to the one we're facing now. There were dire warnings from the mass consensus of the scientific community about the ozone layer shrinking. Schultz says Ronald Reagan urged skeptics in industry to come up with a plan. He said do it as an insurance policy in case the scientists are right. The scientists were right. Reagan and his approach worked. Sec. Schultz asks why not take out an insurance policy and approach climate change the Reagan way?

Rubio responded first saying, "Because we're not going to destroy our economy the way the left-wing government that we are under now wants us to do." Tapper reminded Rubio he's citing George Schultz, a conservative in the Reagan administration. To which Rubio responded, Schultz "may have lined up with them on this position, but here's the bottom line: Every proposal they put forward are proposals that will make it harder to do business in America—that will make it harder to create jobs in America.

"Single parents are already struggling across this country to provide for their families. Maybe a billionaire here in California can afford an increase in their utility rates, but a working family in Tampa, Florida or anywhere across this country cannot afford it. So, we are not going to destroy our economy, we are not going to make America a harder place to create jobs in order to pursue policies that will do absolutely nothing—nothing—to change our climate, to change our weather because America is a lot of things—the greatest country in the world, absolutely. But America is not a planet. And we are not even the largest carbon producer anymore—China is. And they are drilling a hole and digging anywhere in the world that they can get a hold of. So the bottom line is, I am not in favor of any policies that make America a harder place to live or to work or to raise their families."

CNN finally found a way to get the GOP candidates to disagree with Reagan: point out that he cared about the environment.
— Will Oremus (@Will Oremus)1442457891.0

Tapper then turns to Gov. Chris Christie, saying "You have admitted that climate change is real and humans help contribute to it ... What do you make of skeptics of climate change such as Sen. Rubio?"

"I don't think Sen. Rubio is a skeptic of climate change. What Sen. Rubio said I agree with," said Gov. Christie. "That, in fact, we don't need this massive government intervention to deal with the problem. Look at what we've done in New Jersey. We've already met our clean air goals for 2020. When I was governor, I pulled out of the regional cap-and-trade deal—the only state in the northeast that did that. And we still reached our goals. Why? Because 53 percent of our electricity comes from nuclear. We use natural gas. We use solar power. We're the highest using solar power state. You know why? Because we made all of those things economically feasible. I agree with Marco. We shouldn't be destroying our economy in order to chase some wild left-wing idea that somehow [we] by ourselves [are] going to fix the climate. We can contribute to that and be economically sound. We can do that in New Jersey. Nuclear needs to be back on the table in a significant way if we want to go after this problem."

Tapper reiterated that he was citing Sec. of State George Schultz. "I don't think anyone would call him left wing," said Tapper. Christie rebutted saying, "Listen, everybody makes a mistake once in a while, Jake. Even George Schultz. And if that's truly a representation of what he believes we should be doing, then with all due respect to the former secretary of state, I disagree with him."

At that point, Sen. Rubio interjected to take issue with being called a "denier" by Tapper, but Tapper clarifies that he used the term "skeptic." Rubio said, "You know you can measure the climate. You can measure it. That's the not issue we're discussing. I'm skeptical of the decisions that the Left wants us to make because I know the impact that those will have on the economy. They will not do a thing to lower the rise of the sea. They will not do a thing to cure California of the drought. But what they will do is make America a more expensive place to create jobs and today with millions of Americans watching this broadcast struggling from paycheck to paycheck that do not know how they are going to pay their bills at the end of this month, I am not in favor of anything that is going to make it harder for them to raise their family."

Then, Gov. Scott Walker chimed in, disparaging U.S. Environmental Protection Agency's rules to address climate change. He said the rules would result in the loss of thousands of manufacturing jobs in his state, as well as other states to enforce and would only "have a marginal effect on climate change."

While Rubio at least acknowledges that California is in a drought, he clearly doesn't take the issue very seriously. At the beginning of the debate, he made light of his "water-bottle-gate moment" in 2013 when his drinking a glass of water became an instant Internet meme. Last night, he joked “I’m aware California has a drought. That’s why I brought my own water bottle.” Nobody appeared to laughed, though.

The candidates basically acknowledged that the climate is changing, but they all "objected to federal action to address it," says ClimateTruth.org. And Rubio and Christie both argue that it's foolish to think humans can change the climate. Rubio awkwardly declared that "America is not a planet," which Slate's Eric Holthaus quips is "the only thing Marco Rubio got right on climate change." And Christie believes it's "some wild left-wing idea" to "fix the climate" by ourselves.

Needless to say, many were not pleased with the Republican candidates' responses. "Tonight, Republican presidential candidates got a question on the most critical challenge facing our country and the world—climate change," said Tom Steyer of NextGen Climate.

"But the candidates got it all wrong: left unchecked, climate change will devastate our economy. Citigroup estimates climate change could cost the global economy as much as $44 trillion. We already have the clean energy solutions at hand. Now we need candidates with a plan to accelerate the transition to clean energy, creating millions of jobs and ensuring economic prosperity while preventing climate disaster. It’s irresponsible to do anything less."

Many people are having a field day with Rubio's "America is not a planet" gaffe. "So, Rubio's logic seems to say that since America isn't a planet, it shouldn't have to address the global crisis that is climate change," said Bustle's Josephine Yurcaba. "The U.S. is actually second in carbon-producing countries, according to Statista, but for some reason Rubio thinks that not being first should mean that we aren't responsible at all, which just doesn't make sense."

As for Rubio's claim that federal action will do "nothing to change our climate," FactCheck.org takes issue:

Rubio is correct that “America is not a planet,” of course, but that does not mean that policies at the national level will have absolutely no effect on the climate. When we covered this issue in January, an expert told us that U.S. emissions alone, if left unchanged, would cause about half a degree Celsius of warming by the end of the century. Efforts to cut these emissions, including the recently released Clean Power Plan, which would limit emissions from power plants, and other policies such as fuel efficiency standards, will have a small but non-zero effect on that temperature change, and related sea level rise.

Furthermore, many experts say that U.S. leadership on climate is important in convincing other nations to also cut their carbon pollution. In both senses, Rubio is wrong that cutting emissions will do “absolutely nothing” to fight climate change.

Many voiced their outrage over the remarks on Twitter, as well:

so @marcorubio's view is that America must lead world in every way but shouldn't do anything on climate change cause "we're not a planet"
— Peter Beinart (@Peter Beinart)1442457854.0