As Amazonian Wildfire Season Approaches, We Must Protect the Vulnerable Forest 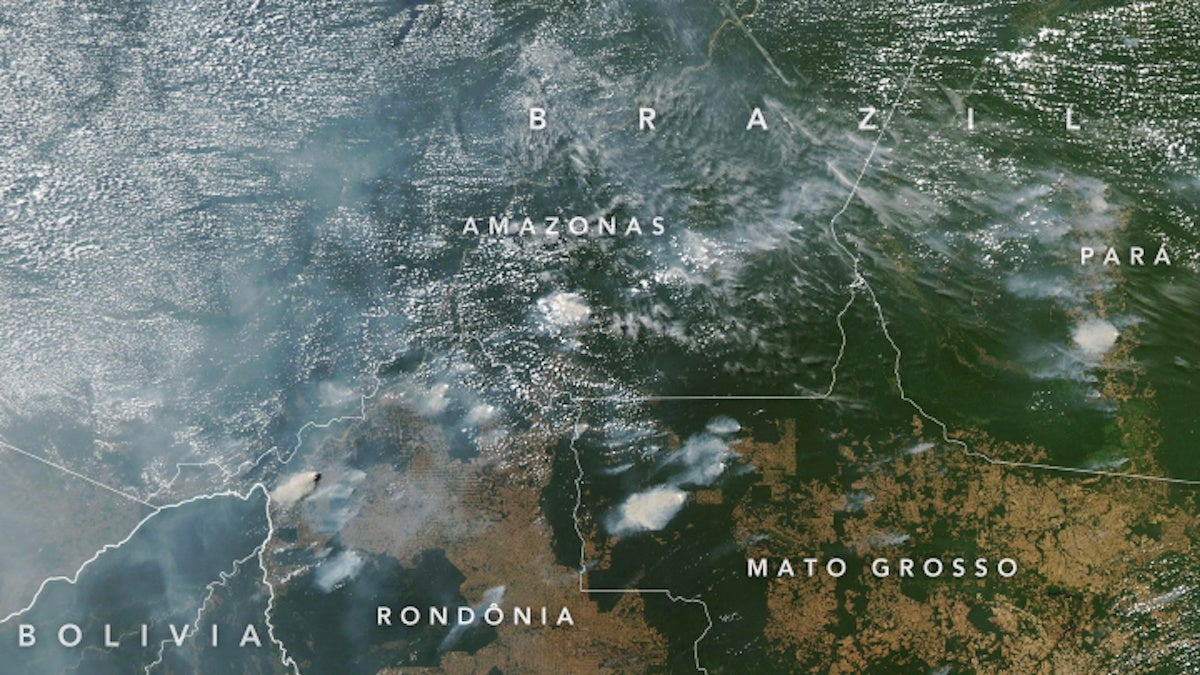 The wildfires that tore across Australia were as devastating as they were overwhelming, scorching some 15 million hectares of land, killing 34 people and more than 1 billion animals. In terms of its apocalyptic imagery — sweeping infernos torching great swaths with unerring speed — Australia’s wildfires were hauntingly reminiscent of the fires that roared through the Amazon rainforest over the past year. Indeed, more than 80,000 fires hit the region during 2019, according to the Brazilian government.

Though many months have now passed since global media focused on the unfolding disaster in the Amazon — one of the world’s most important carbon sinks — the problem has far from disappeared. Indeed, as the region gears up toward its next Amazon wildfire season, the causes underpinning the problem — like illegal logging, encroachment from agribusinesses and profit-driven government policies — remain very much at play.

And though uncertainty surrounds some of the short- and long-term impacts of increased commercial activity in the Brazilian Amazon, the consequences on a rapidly warming planet are stark indeed. New research suggests that some deforested regions of the rainforest are exhaling more carbon dioxide than they’re taking in.

What’s more, experts and environmentalists are quick to point the finger of blame toward a principal factor: a government presided over by Brazilian President Jair Bolsonaro, whose tenure has been characterized by aggressive deregulation and increased commercial exploitation of the Amazon’s resources.

“The impact is obvious: We have much more deforestation,” said Philip Fearnside, an ecologist at the National Institute for Research in Amazonia in Brazil, earlier this year. Even before Bolsonaro took office officially, Fearnside sounded the alarm about the Brazilian president’s intentions in the Amazon. And with Bolsonaro well into the second year of his tenure, “he’s made good on those promises,” Fearnside added.

Indeed, in the year ending on July 30, 2019, more than 10,000 square kilometers of Brazilian Amazon rainforest were lost through deforestation — an amount last topped in 2008, according to Brazil’s National Institute for Space Research. The number of active fires in August 2019 was three times higher than in 2018 and the highest number since 2010. The broad ramifications of these trends are far from clear-cut.

According to Jos Barlow, a professor of conservation science at Lancaster University, England, “different fire types have very different behaviors,” with varying severities of impact. While “understory” forest fires have the smallest flame heights and burn slowly across the forest floor, for example, “they also have long-lasting impacts, killing around 50 percent of all trees, with mortality occurring for many years after the fire,” Barlow wrote in an email.

And so, “How long will it take for forests to recover biomass and primary forest species composition?” Barlow asked. “Will they fully recover, or will they be locked into a lower biomass state?”

Then there’s the potential impact on the climate. For the first six months of 2019, deforestation and fires in the Brazilian Amazon released as much as 141 million metric tons of carbon dioxide, according to research led by the Woods Hole Research Center. As César Terrer, a postdoctoral scholar in Earth system science at Stanford’s School of Earth, Energy and Environmental Sciences, explains it, the destruction of the Amazon through logging and wildfires means “we’re also limiting the potential of current plants to continue storing CO2.”

Terrer led a study using anticipated carbon dioxide levels for the end of the century and found that plant biomass should increase by 12 percent as a result — an increase that would help enable plants and trees to store more carbon dioxide. “A 12 percent increase is huge,” Terrer said in a phone interview. “For the Amazon in particular, that’s more than 15 billion tons of carbon,” he added, explaining that this amount is equivalent to “all the carbon stored in all the trees in all the forests” in the United States. “They could store all that additional carbon for free, if we let them be.”

The problem? That 12 percent increase is predicated upon current plant biomass levels remaining as they currently are. Instead, “we’re increasing deforestation rates in the Amazon, which is hugely important for the climate,” Terrer said. “I’m strongly concerned.”

After the turn of the century, Brazil appeared to be wrestling the problem of a shrinking Amazon. Between 2004 and 2012, Brazil employed an action plan instituting a number of key provisions, including an expanded network of protected areas alongside market incentives and disincentives, like a successful deforestation moratorium agreed to by nearly all soybean processors and exporters in Brazil. Deforestation rates during that time plummeted.

But 2012 marked a turning point. Since then, deforestation has been ticking upwards — 2016, for example, saw a 29 percent increase.

The administration under Bolsonaro has used that fact to justify its policies in the Amazon, said Fearnside. “There were lots of things happening before Bolsonaro took office, but Bolsonaro has certainly increased that [deforestation] substantially,” Fearnside said, pointing to the myriad ways his actions have played out.

The current Brazilian president has taken various measures to weaken the country’s environment ministry — the Brazilian Institute of Environment and Renewable Natural Resources (IBAMA) — not least of all by tapping Ricardo Salles to lead it. Salles has called climate change an “innocuous” and “secondary” issue, and has characterized the rate of illegal deforestation in the Amazon as near “zero.” The director of Brazil’s Space Research Institute was fired when the agency’s own calculations — which illustrated a 278 percent increase in deforestation last July — disproved Salles’s claims.

The environment ministry has also stepped back its regulatory oversight. Though 95 percent of the deforestation that occurred in the first three months of Bolsonaro’s tenure was illegal, no offenders were punished. Indeed, a New York Times analysis found that IBAMA’s enforcement actions fell by 20 percent during the first half of 2019, as compared with the year prior. Increased land raids have impacted Indigenous populations in particular.

“President Bolsonaro of Brazil is encouraging the farm owners near our lands to clear the forest,” wrote Raoni Metuktire, chief of the Indigenous Brazilian Kayapo people. “And he is not doing anything to prevent them from invading our territory.”

Some of Bolsonaro’s actions have been met with opprobrium among certain sectors of Brazil’s corporate class. Blairo Maggi, a billionaire soybean producer and former agriculture minister, has warned of international condemnation of the government’s excursions into the Amazon. “The farmers, associations and industry will have to redo what has been lost,” he told The New York Times. “We retreated 10 steps; we will have to work to get back to where we were.”

Nevertheless, “there are large parts of the agribusiness that are on the other side,” said Fearnside, pointing to the thriving soybean industry in Matopiba, a vast region spanning four Brazilian states. And where is this produce going? In 2017, 92 percent of the soybeans grown for the domestic market in Brazil were used to feed livestock to supply the world’s demand for meat.

“The soy farmers there are all on the bandwagon of denying climate change, which is incredible given that climate change is likely to wipe out their soybean business there,” Fearnside said.

With Bolsonaro only about one year and a half into his presidency, Fearnside is understandably concerned about his remaining tenure and describes the actions already undertaken as having opened up a Pandora’s box. This includes the human health impacts from wildfire-created air pollution on both nearby and distant urban centers — even intensifying glacier melt in the Andes.

Other experts agree with Fearnside. According to Jos Barlow earlier this year, all indications suggested that 2020 would be “even worse.” That prophecy is proving true, with deforestation rates currently on pace to surpass last year’s.

An earlier version of this article first appeared on Truthout and was produced in partnership with Earth | Food | Life, a project of the Independent Media Institute.