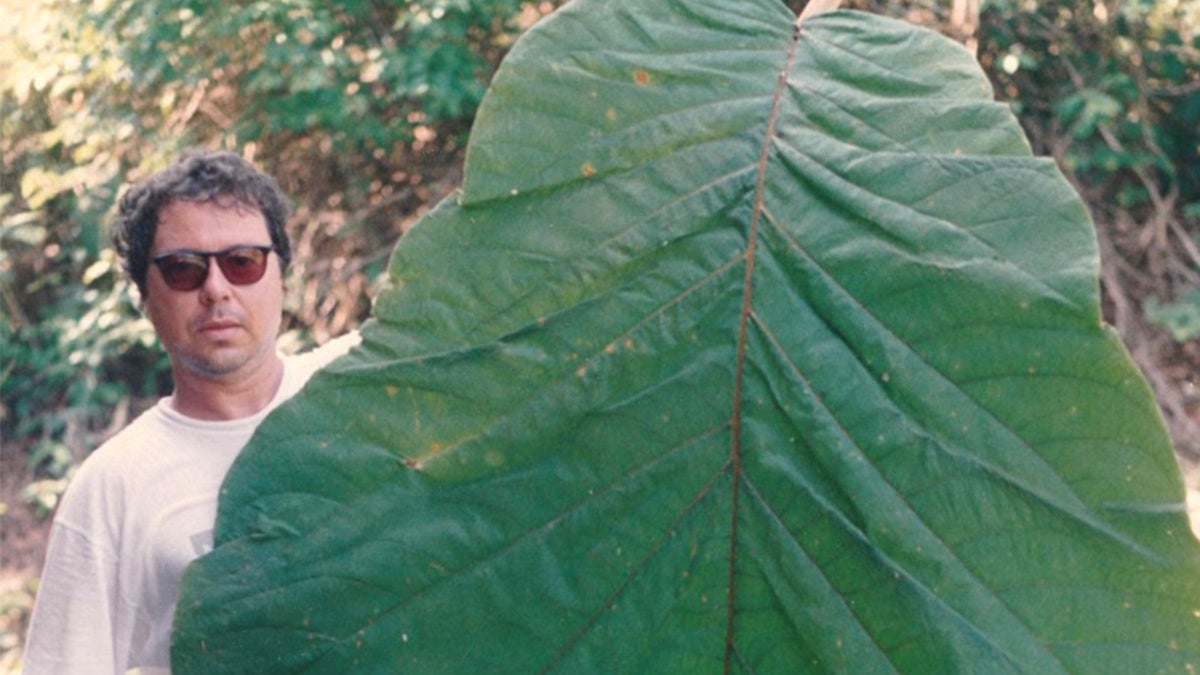 At the National Institute of Amazonian Research (INPA) in Manaus, Brazil, a framed exhibit of a massive dried leaf has been a local attraction for decades. But the complete identity of the tree it belongs to remained unresolved — until now.

Researchers have known that the tree is a species of Coccoloba, a genus of flowering plants that grow in the tropical forests of the Americas. Botanists from INPA first encountered an individual of the unknown Coccoloba tree in 1982 while surveying the Madeira River Basin in the Brazilian Amazon. They spotted more individuals of the plant over subsequent expeditions in the 1980s. But they couldn’t pinpoint the species at the time. The individual trees weren’t bearing any flowers or fruits then, parts that are essential to describing a plant species, and their leaves were too large to dehydrate, press and carry back to INPA. The researchers did take notes and photographs.

In 1993, botanists managed to finally collect two large leaves from a tree in the state of Rondônia, which they then framed for public viewing at INPA. “The species became locally famous, but due to the lack of reproductive material it could not be described as a new species for science,” Rogério Gribel, a researcher at INPA, told Mongabay in an email.

It was more than a decade later, in 2005, that Gribel and his colleague, Carlos Alberto Cid Ferreira, collected some seeds and dying flowers from a tree in Jamari National Forest. Again, these materials weren’t good enough to describe the plant species. So they sowed the seeds at the INPA campus, grew the seedlings, and waited. Their patience bore fruit 13 years later. Literally.

In 2018, one of the planted trees flourished and fruited, Gribel said, finally giving them the botanical material they needed to describe the new species.

“We are very happy and proud that after the long period of ‘tracking’ such a peculiar and relatively rare species, we have finally succeeded in obtaining the flowers and fruits that are the essential structures for describing a new species for science,” he said.

Gribel and his colleagues, who described the species in a recent paper published in Acta Amazonica, have named it C. gigantifolia in reference to the plant’s giant leaves.

The researchers say that C. gigantifolia, which grows to about 15 meters (49 feet) in height and has leaves that can reach 2.5 meters (8 feet) in length, likely has the largest known leaf among dicotyledonous plants — a large group of flowering plants that include sunflowers, hibiscus, tomatoes and roses. These plants have seeds that can be split into two identical halves, each forming the first two embryonic leaves of the seedling, and their leaves generally have branched veins. The seeds of monocotyledonous plants, by contrast, give out a single embryonic leaf and the grown plants’ leaves have parallel veins, such as those of palm trees, grasses, orchids and bananas.

“Comparing leaf size between species is often difficult as there is a large individual variation in leaf size within the same species,” Gribel said. “It is possible that this leadership of Coccoloba gigantifolia will be challenged in the future. For example, species of Gunnera, a genus of wide distribution worldwide, also exhibit huge leaves. But the Gunnera species are not arboreal.”

Although C. gigantifolia has been known to the public and the scientific community for nearly four decades, describing it formally and giving it an official name was an essential step to complete.

“A known but undescribed species is like a person without a birth certificate or ID; it is like a person who does not formally have their identity recognized,” Gribel said. “For example, in Brazil there is currently a major effort by the scientific community to catalog the national flora. Although known for many years, Coccoloba gigantifolia could not so far be added to the Brazilian Plant List by the scientists participating of this great initiative.”

Without a formal identity, it’s also difficult to assess the plant’s conservation status. “Initiatives to prevent its extinction are also impaired if the plant has no scientific name,” Gribel said. “Similarly, measures to regulate collection, trade, transport, planting, etc. depend on species recognition as a single taxonomic entity.”

With the formal description in place, the researchers say that the species is likely rare and has a high risk of extinction. Individuals of C. gigantifolia have been recorded only from the Madeira River Basin in the Brazilian states of Amazonas and Rondônia — areas currently impacted by infrastructure projects such as hydroelectric dams, roads and expanding agriculture.

“The middle and low stretches of the Madeira River still have much of their forest conserved but deforestation has been growing rapidly in these areas, especially in northeastern Rondônia and southern Amazonas,” Gribel said. “The Samuel Dam in the Jamari River (and possibly the Santo Antonio and Jirau Dams in the Madeira River) flooded tens of thousands of hectares of forests with Coccoloba gigantifolia and may have negatively affected the populations. The ongoing paving of the BR319 highway will increase deforestation throughout the Middle and Lower Madeira region.”

Based on these threats, and on the findings that the species is rare and likely has disjointed populations occurring in a rapidly changing landscape, the authors have recommended listing the species as endangered on the IUCN Red List. 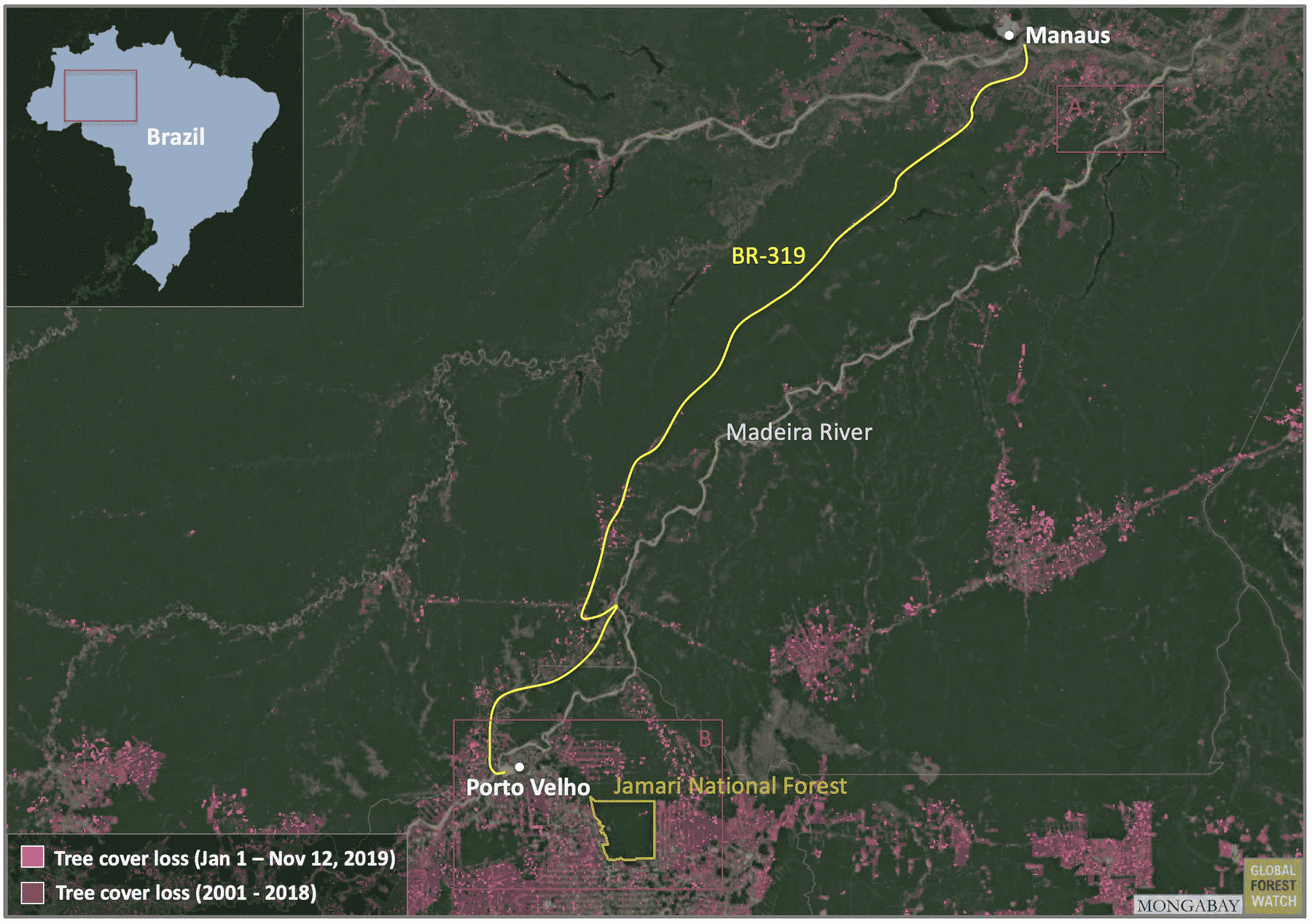 Researchers found Coccoloba gigantifolia at two spots close to the Madeira River and BR-319: near Manaus in Amazonas state (inset A) and Porto Velho in Rondônia (inset B). Satellite data from the University of Maryland show that these areas have experienced heavy deforestation over the past couple decades. Source: GLAD/UMD, accessed through Global Forest Watch. 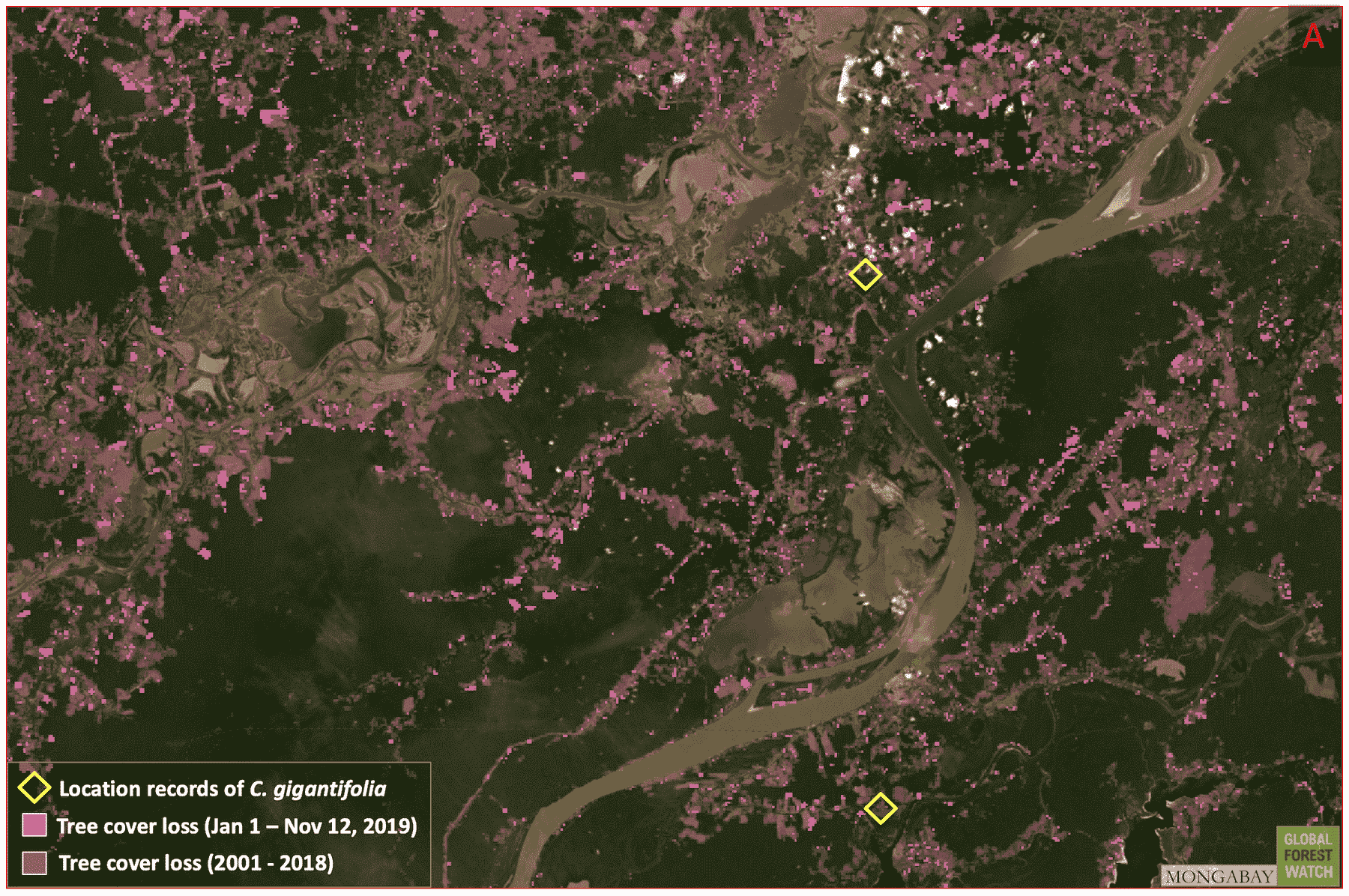 Zooming in on the northern site (inset A on the map above) reveals areas of recent forest loss encroaching on the approximate locations where researchers recorded the newly described species. Source: GLAD/UMD, accessed through Global Forest Watch; Melo et al., 2019. 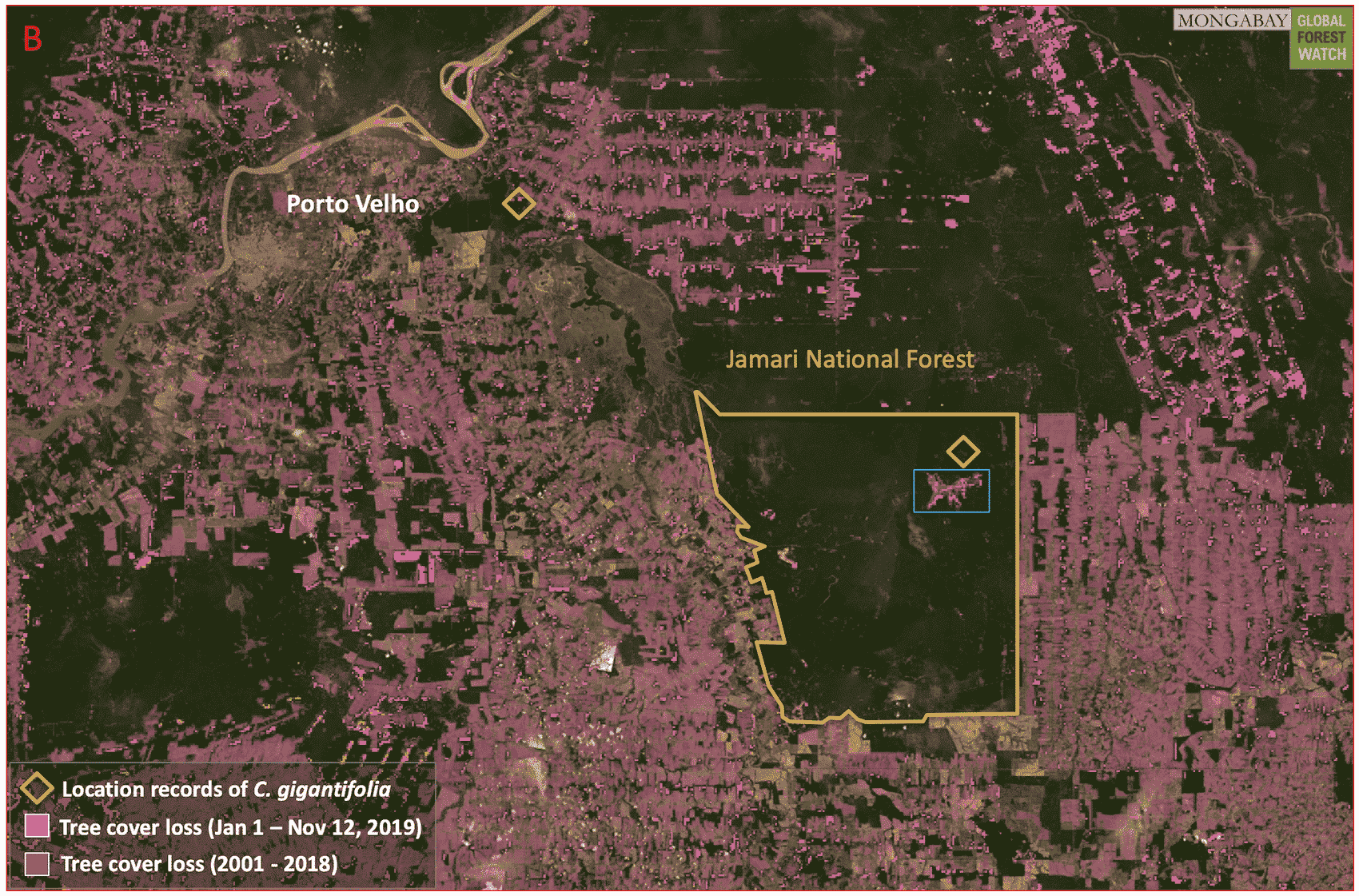 Coccoloba gigantifolia was also recorded in two spots near Porto Velho. The region is part of the so-called “arc of deforestation,” where agricultural expansion has razed much of the rainforest along the underbelly of the Brazilian Amazon. The northernmost of these sites is in an unprotected area that was flooded by the Samuel hydroelectric dam in the 1990s. The other site is located within Jamari National Forest near a wetland (blue inset) that is showing signs of forest loss. Sources: GLAD/UMD, accessed through Global Forest Watch; Melo et al., 2019. 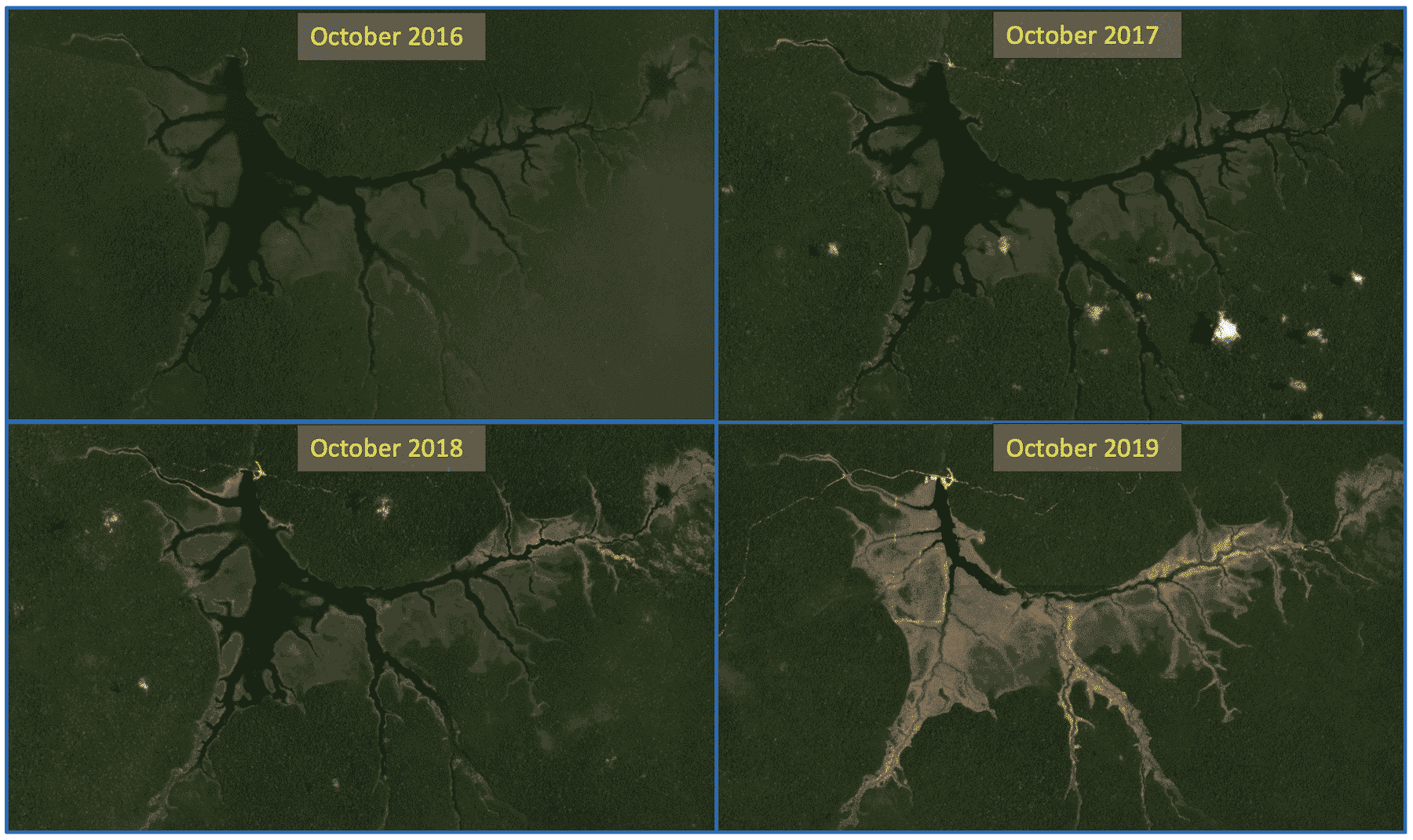 Satellite imagery shows water levels of the wetland near where Coccoloba gigantifolia was found in Jamari National Forest were far lower in October 2019 than in years past. Source: Planet Labs.