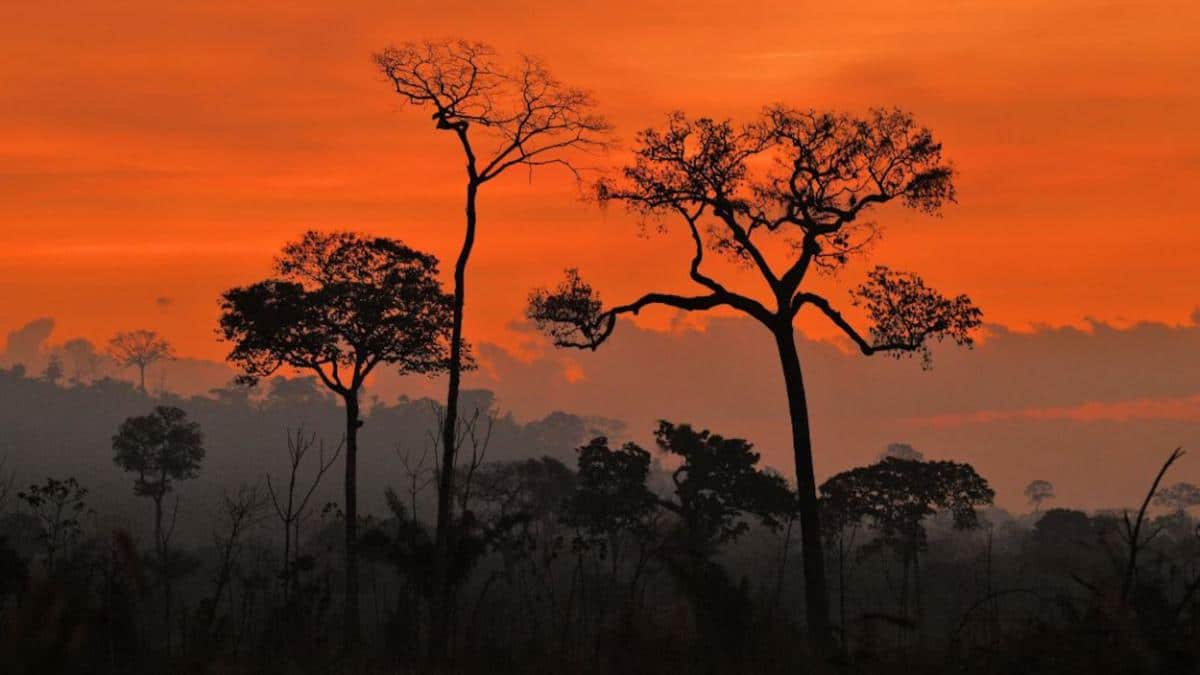 The sun sets as smoke from illegal fires in an area of Amazon rainforest lingers, south of Novo Progresso in Para state, Brazil, on Aug. 15, 2020. CARL DE SOUZA / AFP via Getty Images

Following years of warnings and mounting fears among scientists, “terrifying” research revealed Wednesday that climate change and deforestation have turned parts of the Amazon basin, a crucial “sink,” into a source of planet-heating carbon dioxide.

Though recent research has elevated concerns about the Amazon putting more CO2 and other greenhouse gases into the atmosphere than it absorbs, the new findings, published in the journal Nature, were presented as a “first” by scientists and climate reporters.

From 2010 to 2018, researchers for the new study — led by Luciana Gatti of Brazil’s National Institute for Space Research — conducted “vertical profiling measurements” of carbon dioxide and monoxide a few miles above the tree canopy at four sites in Amazonia.

The researchers found that “Southeastern Amazonia, in particular, acts as a net carbon source” and “total carbon emissions are greater in eastern Amazonia than in the western part.” The former, they noted, has been “subjected to more deforestation, warming, and moisture stress” than the latter in recent decades.

In an accompanying article in Nature, Scott Denning, a professor in the department of atmospheric science at Colorado State University, wrote that the paper’s “atmospheric profiles show that the uncertain future is happening now.”
In an emailed response to questions, Dr. Denning praised the new study as the first real large-scale measurement — from various altitudes across thousands of kilometers and remote sectors — of the phenomenon, an advance beyond the traditional measurement at forest sites. The results show “that warming and deforestation in eastern Amazonia have reversed the carbon sink at regional scale and that the change is actually showing up in atmospheric CO2,” he wrote.

According to the newspaper — which noted the role of emissions from deliberately set fires for beef and soy production as well as the global criticism that Brazilian President Jair Bolsonaro has faced for encouraging the soaring deforestation:

Fewer trees meant less rain and higher temperatures, making the dry season even worse for the remaining forest, she said: “We have a very negative loop that makes the forest more susceptible to uncontrolled fires.”
Much of the timber, beef, and soy from the Amazon is exported from Brazil. “We need a global agreement to save the Amazon,” Gatti said. European nations have said they will block an E.U. trade deal with Brazil and other countries unless Bolsonaro agrees to do more to tackle Amazonian destruction.

The study comes after a March analysis, published in the journal Frontiers in Forests and Global Change, that took into account not only CO2 but also methane, nitrous oxide, black carbon, biogenic volatile organic compounds, aerosols, evapotranspiration, and albedo.

The new findings also follow an April study, published in Nature Climate Change, that focused on Brazil, which is home to the majority of the incredibly biodiverse and threatened rainforest that spans nine countries.

“The Amazon rainforest is emitting a billion tonnes of carbon dioxide a year.” #FaceTheClimateEmergency #EcologicalBreakdown https://t.co/vmhHNbU3Gz

The researchers from the April study, who relied on satellite monitoring, found that between 2010 and 2019, the Brazilian Amazon released 16.6 billion tonnes of carbon dioxide, while only taking in 13.9 billion tonnes — meaning that over a decade, it released nearly 20% more CO2 than it absorbed.

“We half-expected it, but it is the first time that we have figures showing that the Brazilian Amazon has flipped, and is now a net emitter,” said co-author Jean-Pierre Wigneron, a scientist at France’s National Institute for Agronomic Research (INRA), at the time. “We don’t know at what point the changeover could become irreversible.”

Agence France-Presse reported that in a statement about the study, INRA said that “Brazil saw a sharp decline in the application of environmental protection policies after the change of government in 2019,” referencing when Bolsonaro was sworn in as president.

“Imagine if we could prohibit fires in the Amazon — it could be a carbon sink,” Gatti said Wednesday, noting the negative impact of converting swaths of the rainforest last for agriculture. “But we are doing the opposite — we are accelerating climate change.”