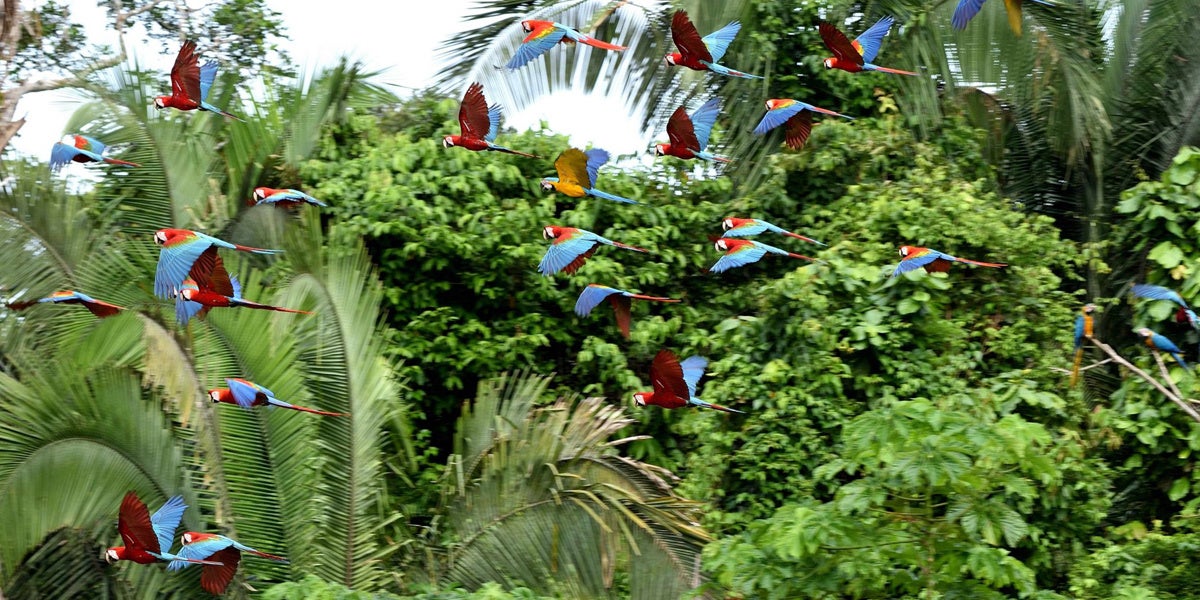 In the course of writing a book about what free-living animals learn from each other, I find myself on the Tambopata River in southeast Peru. The nearest town is Puerto Maldonado but from there the trip is all upriver. Wheeled vehicles are useless in this forest, and there are none. The surrounding forest has been officially protected with designations of national reserve and national park.

Perhaps the strangest thing is that while it takes very special skills for humans to exist in the Amazon rainforest, my trip into the forest is amazingly comfortable. I’m here to hang out with scientists of the Tambopata Macaw Project at the Tambopata Research Center, a special privilege. My logistics are all being facilitated by the expert eco-tourism company Rainforest Expeditions, which is why my trip upriver is so easy.

Our first night, we stop at a tourist lodge called Refugio Amazonas. The next day we visit a Harpy Eagle nest with a big chick. I get lucky enough to see mama, too, when she delivers a monkey to her babe. 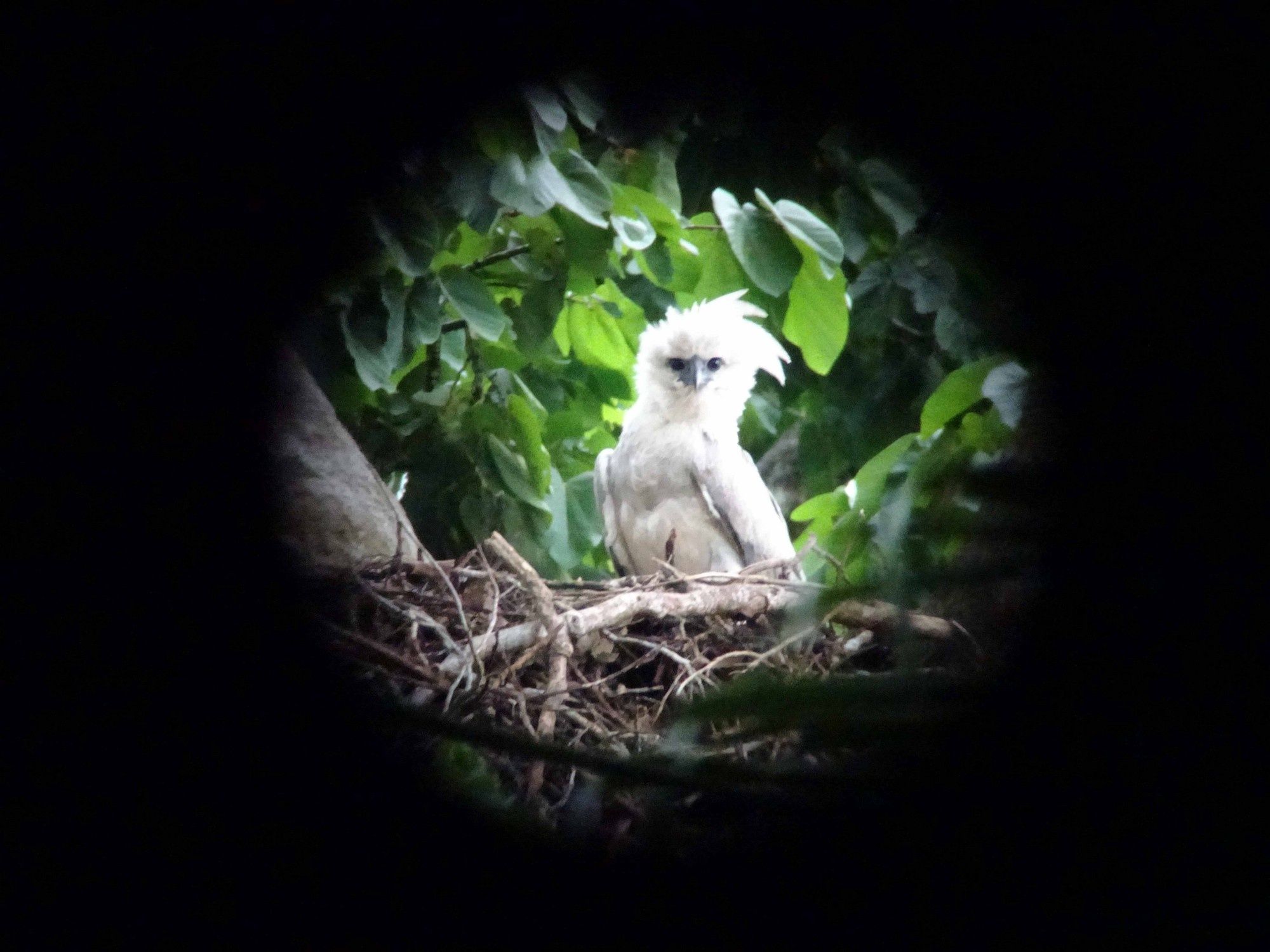 From there it is upriver to the Research Center. There I have the enormous privilege of hanging out with researchers Don Brightsmith and Gaby Vigo, spending many hours watching wild macaws at their nests and visiting the “clay licks” from which they derive the sodium they require. 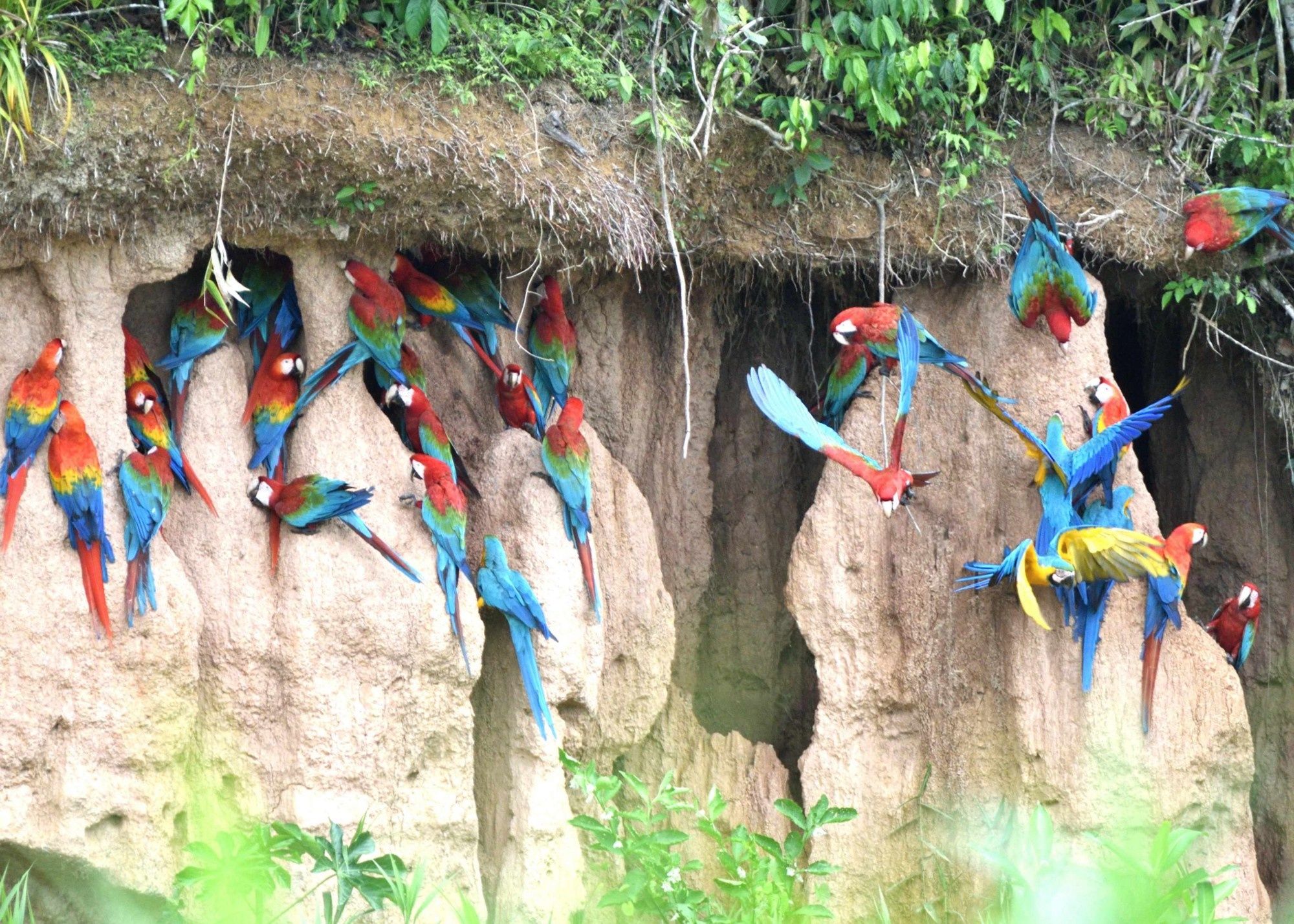 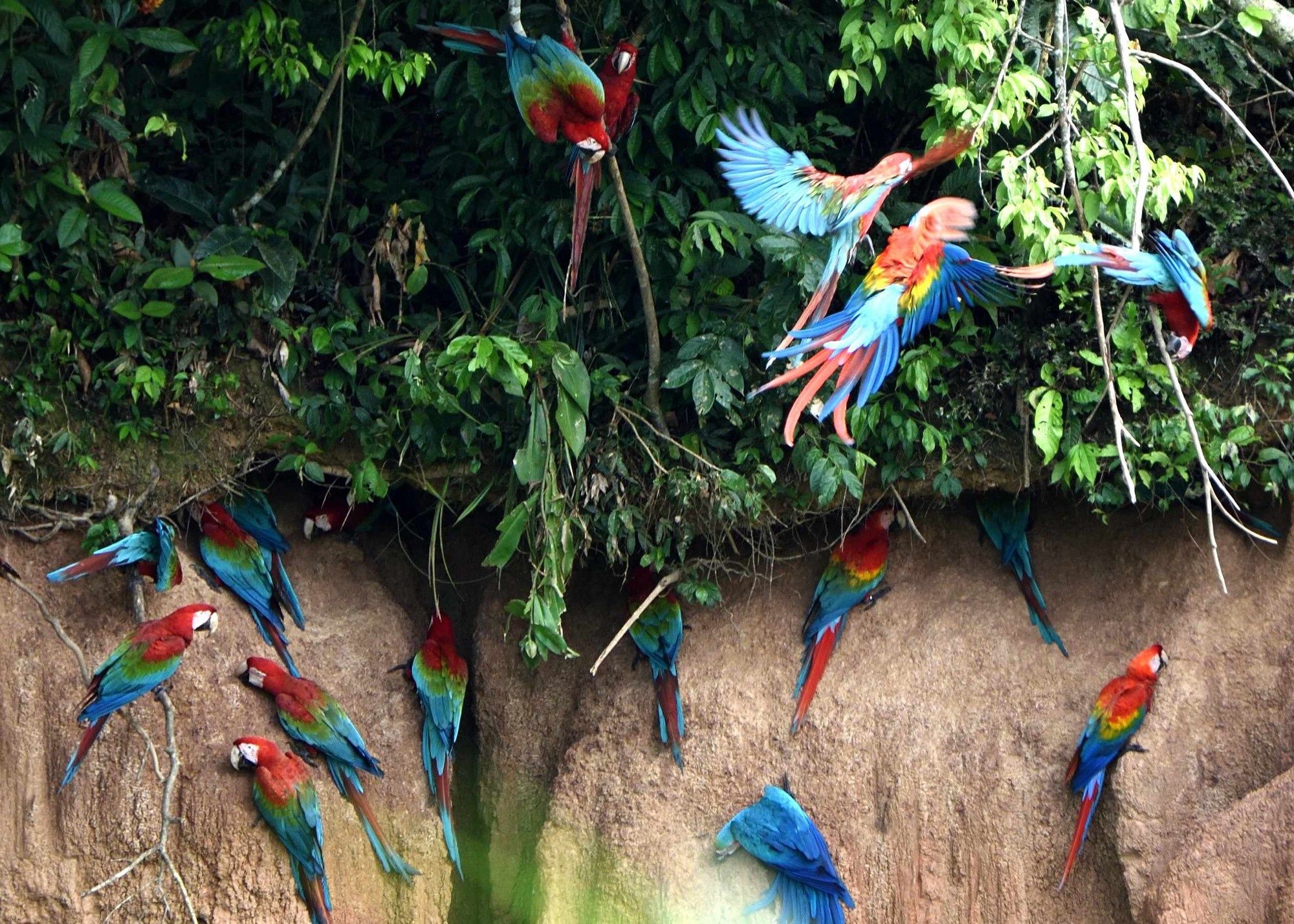 The forest is wholly overwhelming. From ground to canopy, the impression is of a wall of green. Through the ferns of the ground rise saplings and centenarians. Every vertical level is occupied. Trees vary enormously. There are hundreds of species of trees, some with straight dark trunks, spiny trunks, blotchy trunks; some are variegated; some mossy, viney, some bare. Some trees drop prop roots to the ground and others splay head-high buttress roots that emanate from the base of the trees like garden walls. 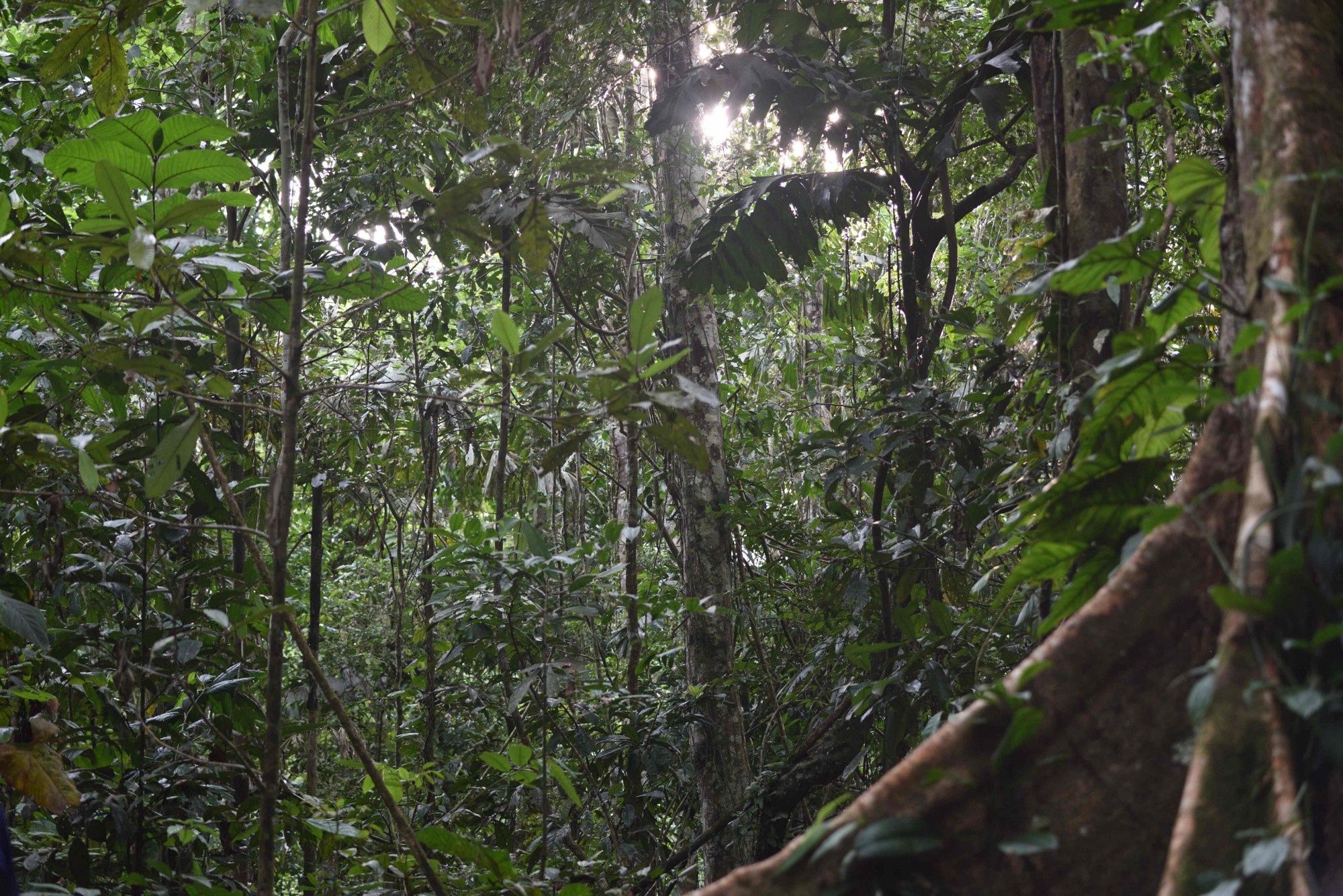 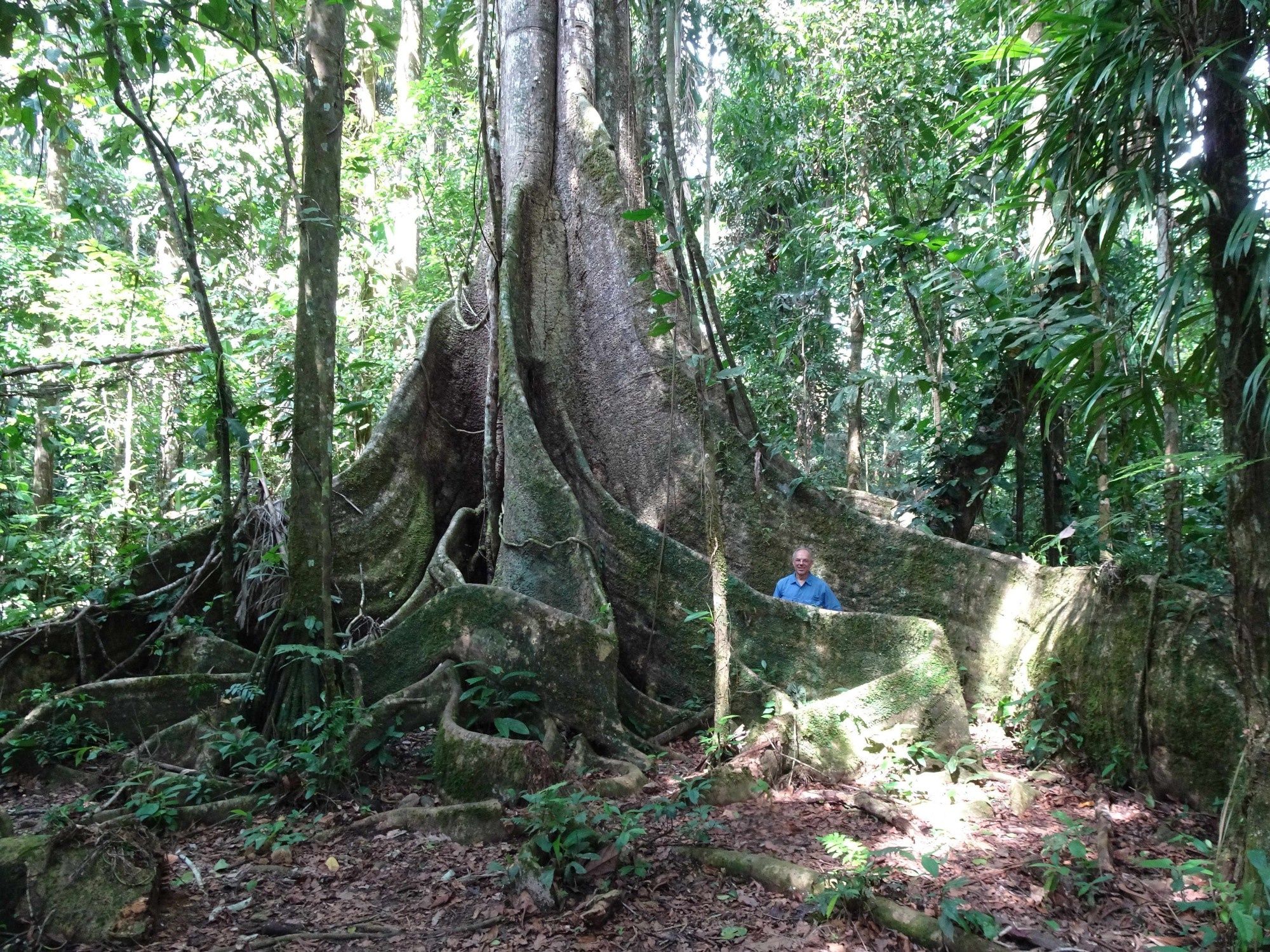 Occasionally a troop of peccaries trundles by, or an agouti, while the trees are rustled by howlers, titis, tamarins, capuchins, spider monkeys and squirrel monkeys. 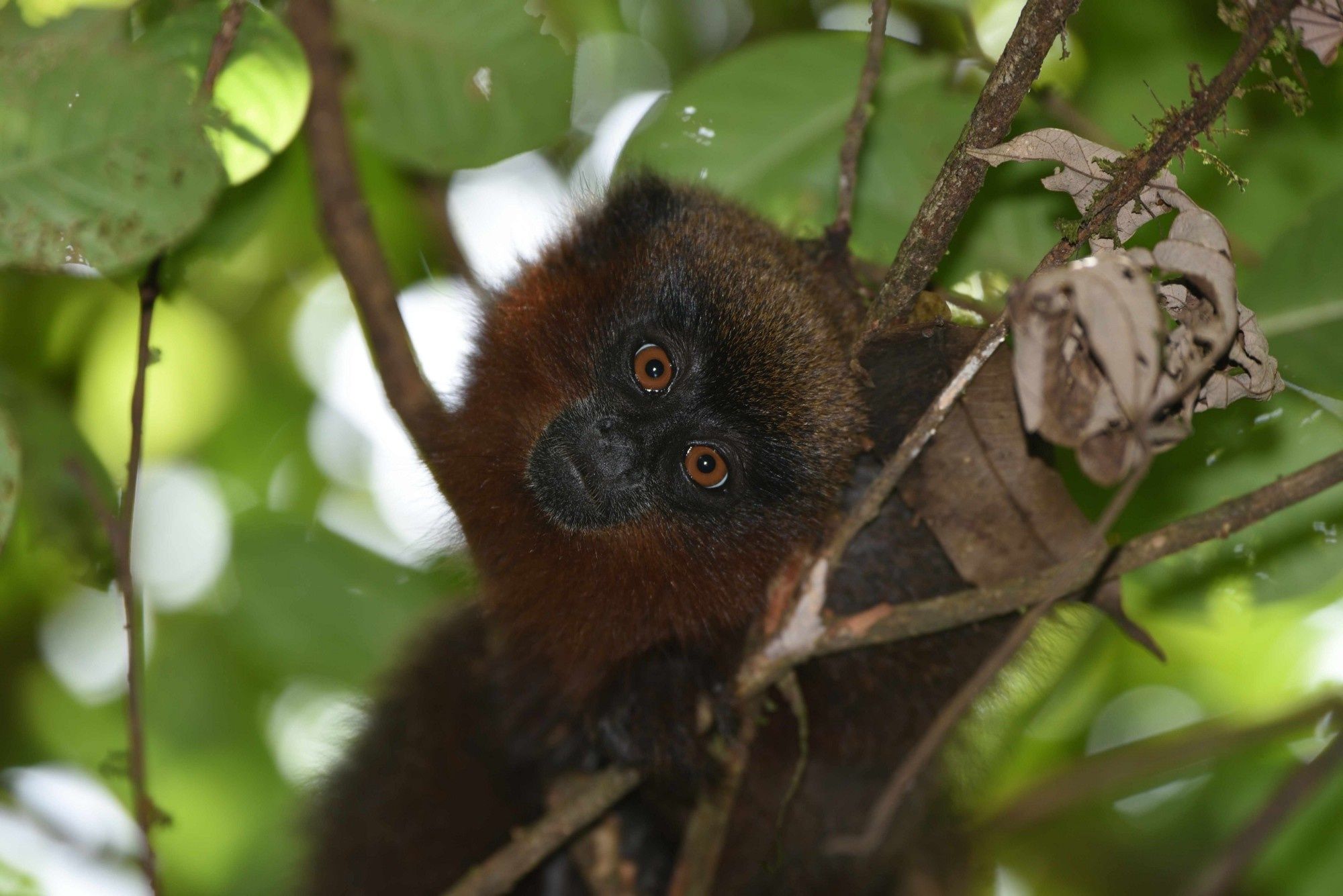 But most of my time and attention are devoted to the macaws I’ve come for. They light the emerald jungle with their flaming bodies. 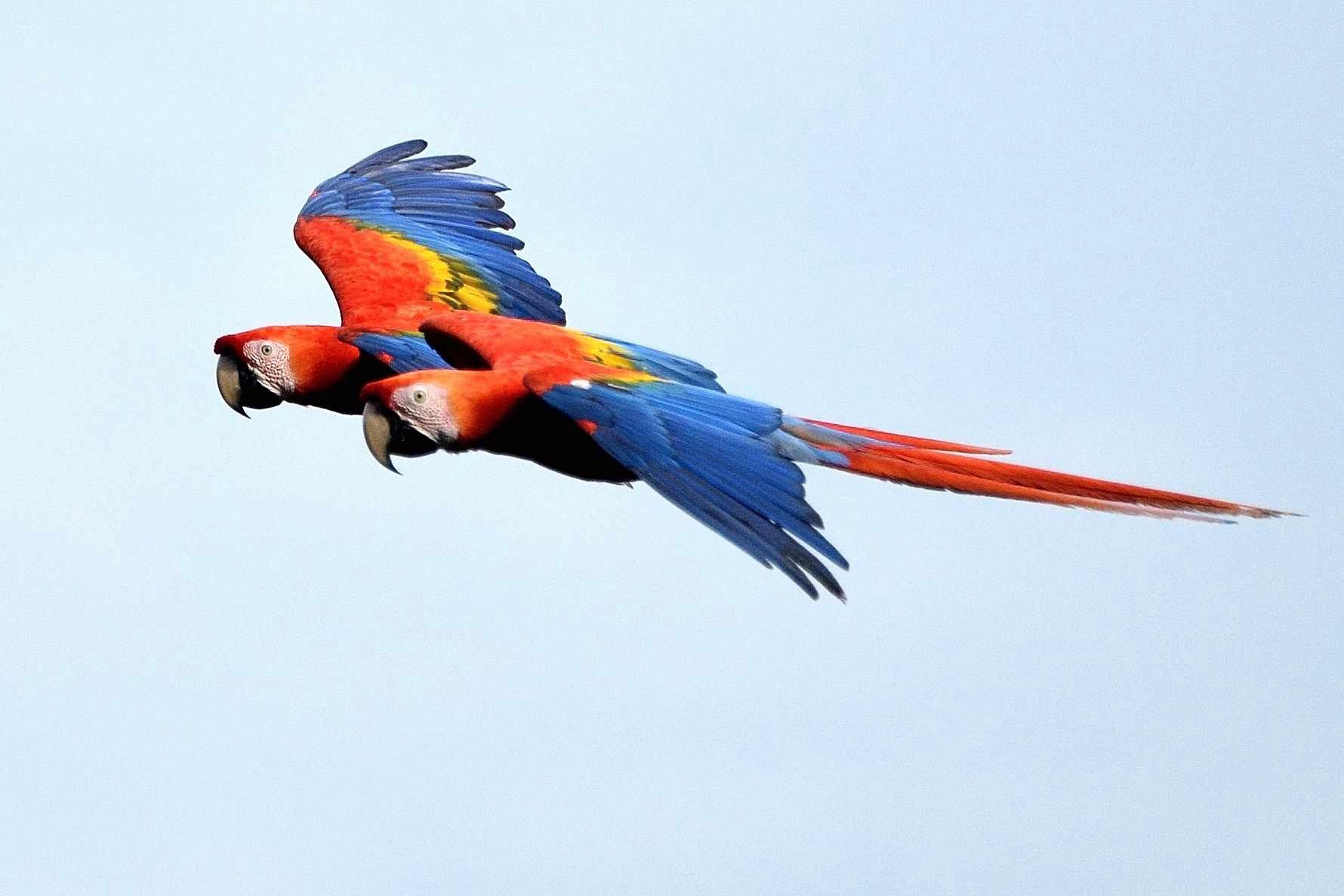 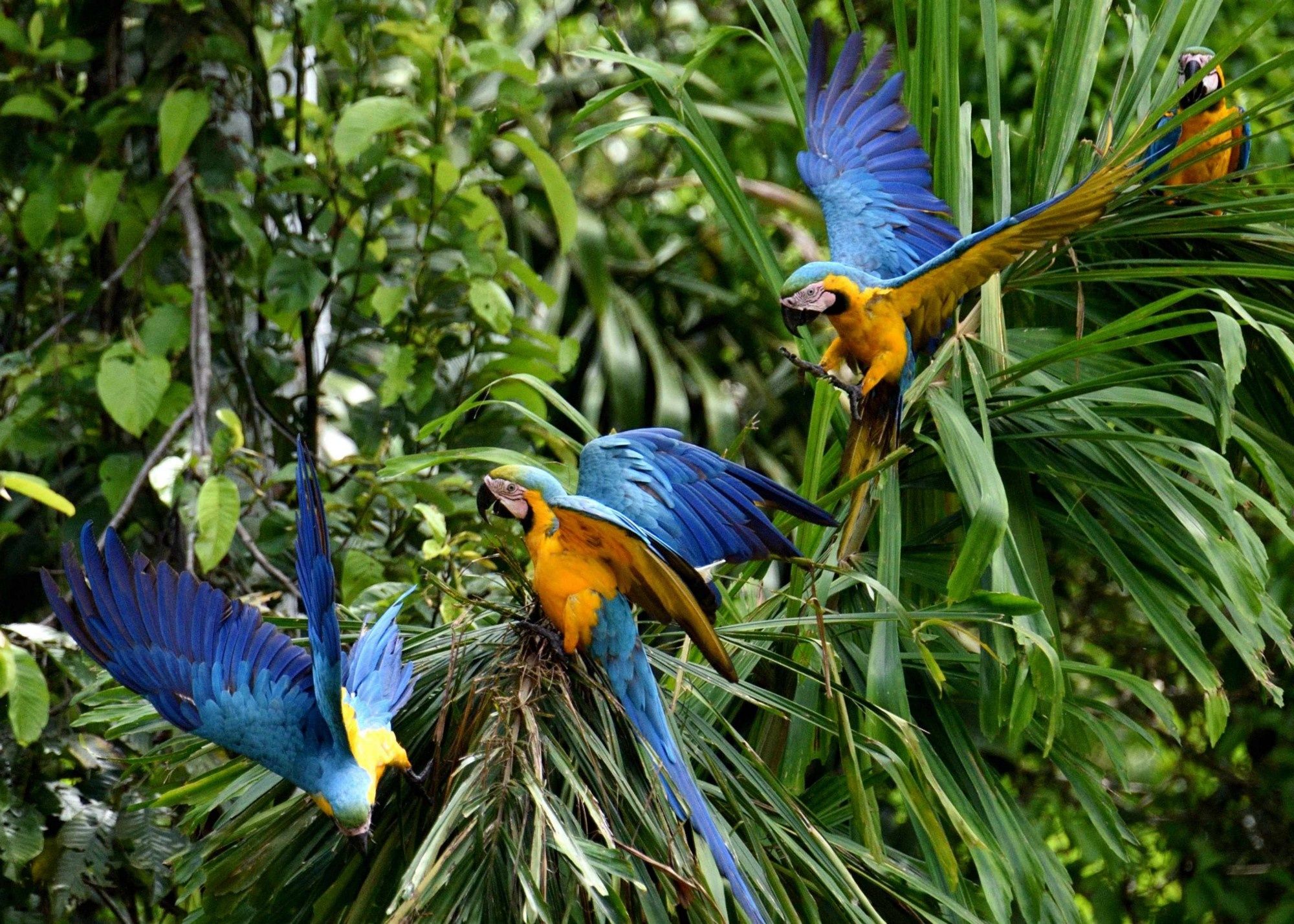 Seeing flocks of macaws helped me remember how big the natural world is supposed to be. And how beautiful it is—where it remains. 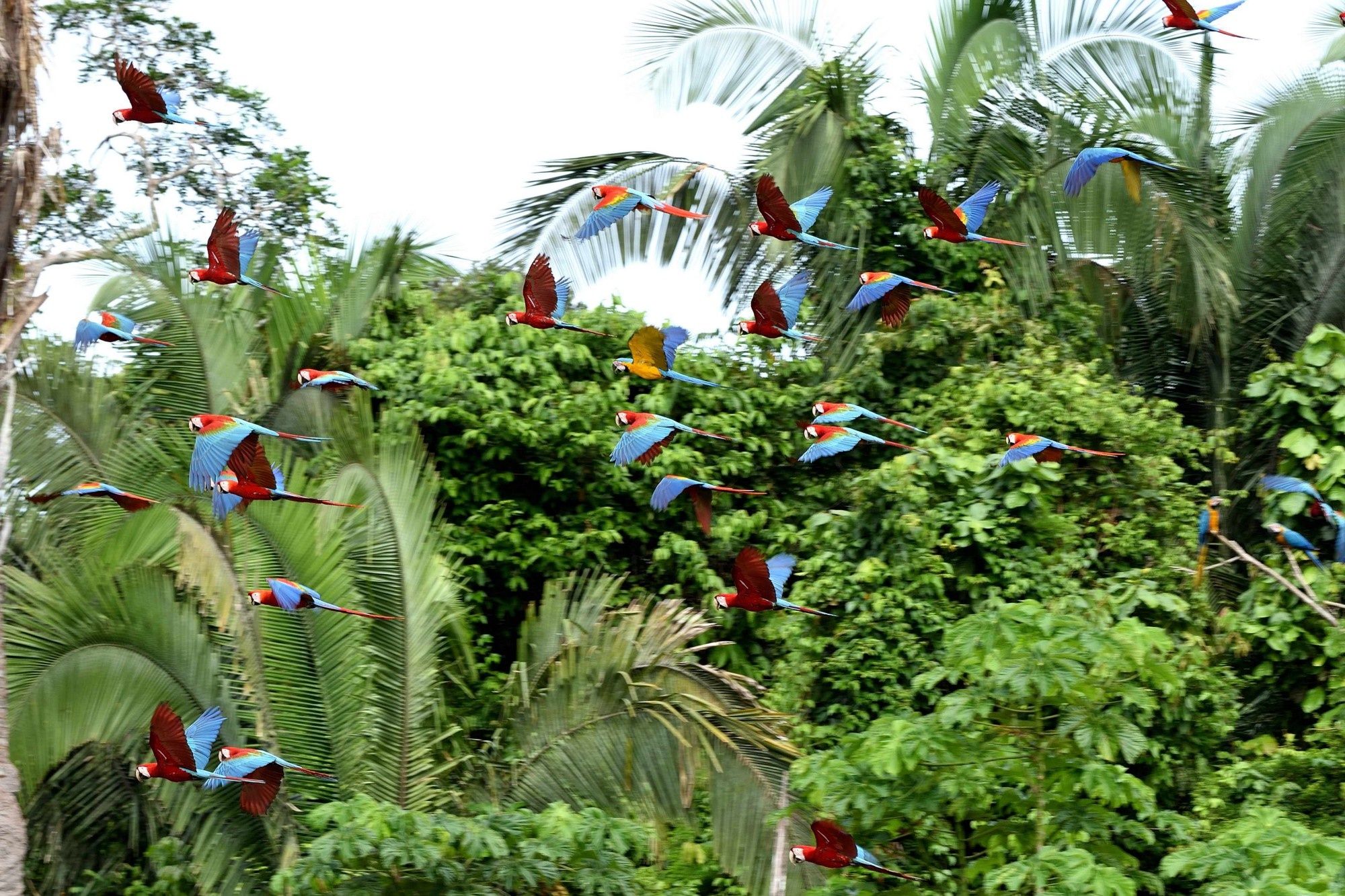 If this is not magic enough, the morpho butterflies provide an added shock of beauty, looking like dried leaves when folded in prayerful rest, then weaving their electric blue through the sunshafts and shadows. 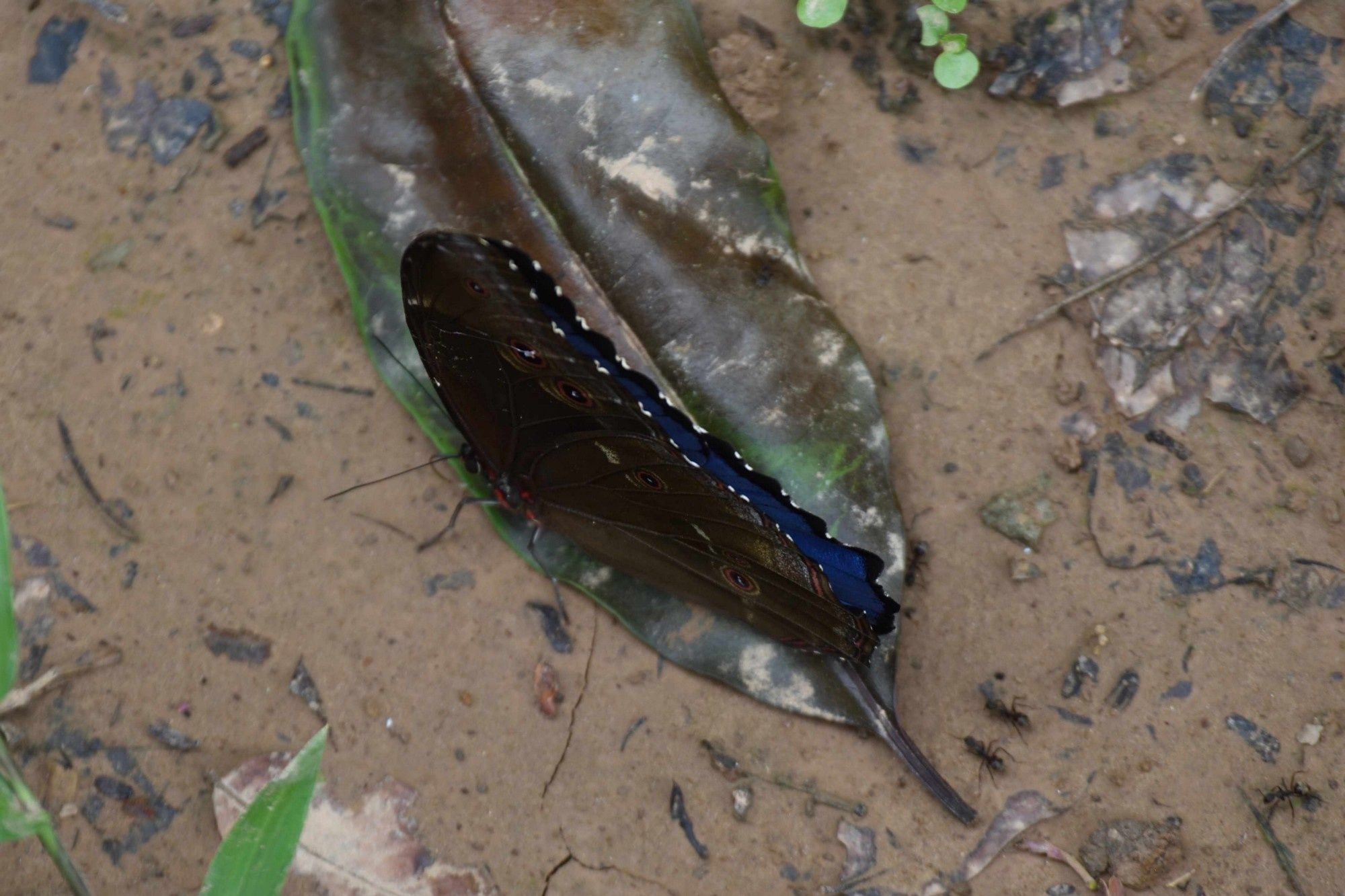 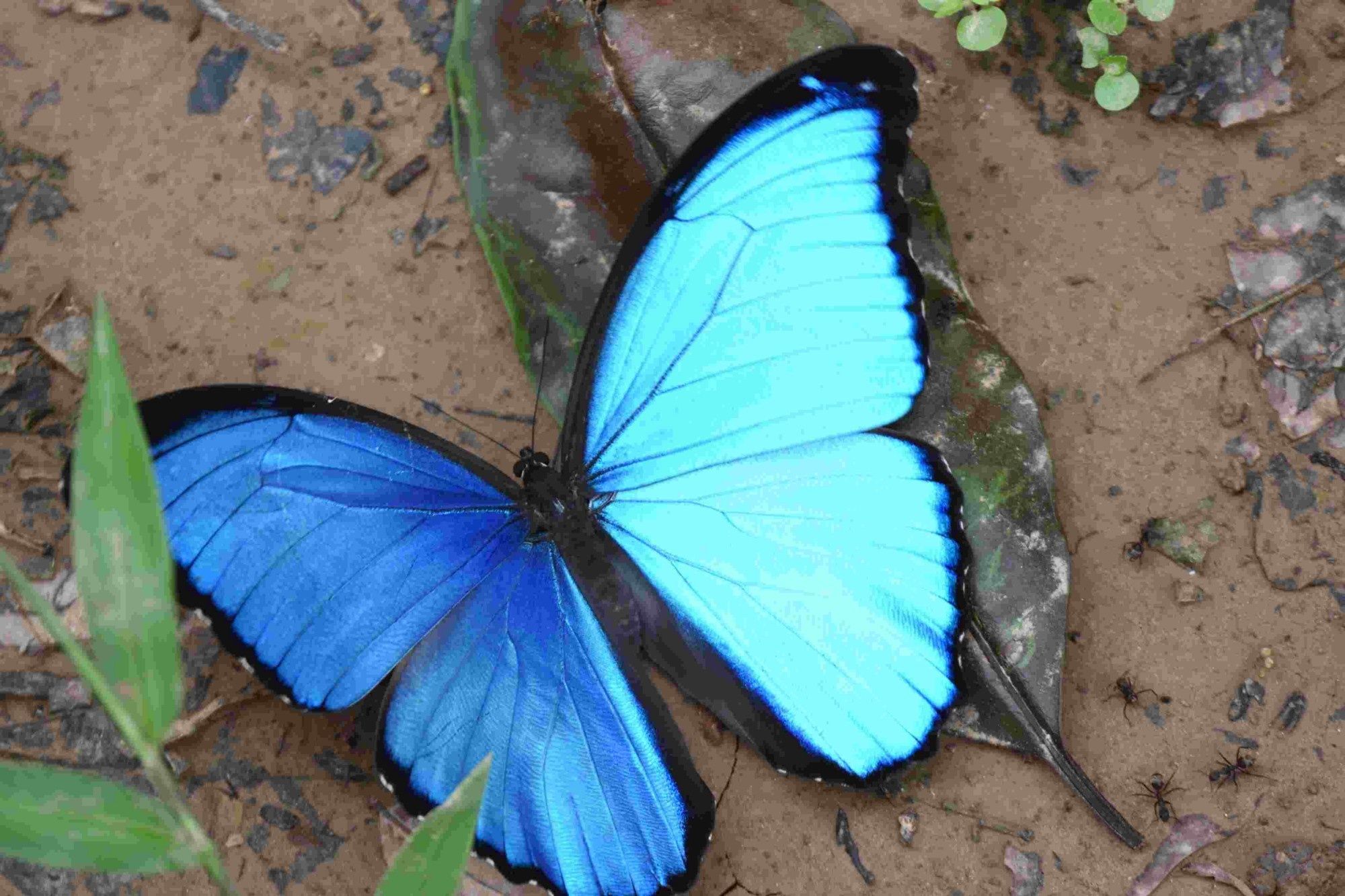 Overall it’s a miraculous glimpse of the original world. May it stay protected from chainsaws and bullets. May we find a way to let it be—this beautiful home of millions of beings—as it has been for millions of years. Because this is where the living world gets its power, and catches its breath.