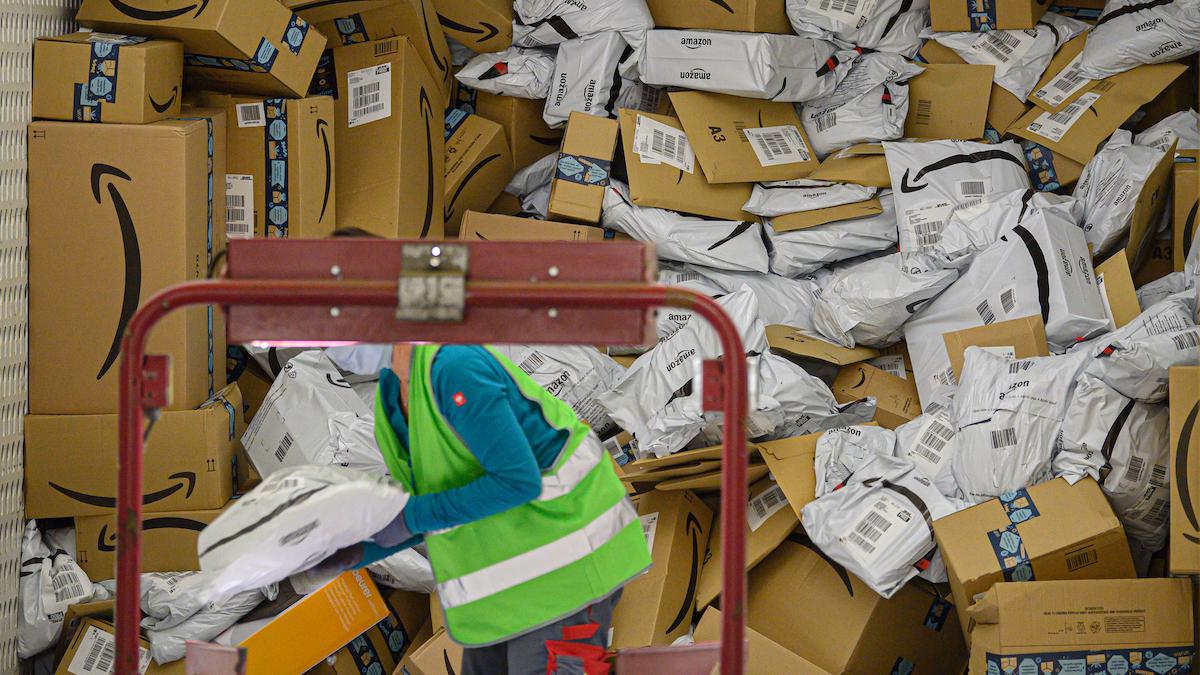 Amazon packages are loaded from a truck onto a conveyor belt by an employee in a DHL package center in Saxony, Ottendorf-Okrilla, Germany on Dec. 7, 2020. Robert Michael / picture alliance via Getty Images

Online retailer Amazon generated 599 million pounds of waste from plastic packaging in 2020, an increase of 29 percent from 2019, a report by nonprofit ocean conservation organization Oceana said.

The report estimated that the amount of packaging ⁠— which includes plastic bags, air pillows, and bubble-lined paper mailers⁠ — that ends up in the world’s oceans equalled a delivery van full of plastic dumping its contents into the sea every 67 minutes.

“The advocacy group says the total would be enough to circle the world 600 times in the form of Amazon’s air pillows,” Victoria Seabrook of SkyNews reported.

Amazon did not agree with Oceana’s estimates of its plastic waste and claimed it is working to reduce the amount of plastic it uses.

“Amazon shares Oceana’s ambition to protect the world’s oceans and respects their work but, for a second year, their calculations are seriously flawed,” a statement by the company said, as reported by The Washington Post. “They have overestimated our plastics usage by more than 300 percent, and use outdated assumptions about the sources of plastic waste entering our oceans.”

Oceana Senior Vice President Matt Littlejohn “said the group’s estimates were based on a combination of trade data and data sets from a scientific, peer-reviewed paper about the amount of plastic — about 11 percent — that ends up in ‘aquatic ecosystems.’ After discussions with e-commerce packaging experts, Oceana made assumptions about Amazon’s market share and the plastic waste linked to that,” Steven Mufson of The Washington Post reported.

“We are using the best data available to us,” Littlejohn said, as The Guardian reported. “If Amazon was transparent, we would gladly use their data. Yes, they are using more non-plastic packaging, but they are also selling a ton more product.”

Oceana asserted that Amazon’s recycling program is flawed and that its “plastic film” packaging is generally not recyclable via curbside recycling. “Amazon’s recycling promises and claims do not add up and do not reduce the company’s very large plastic packaging waste footprint,” said the report, according to The Washington Post.

Oceana’s report “concluded that [Amazon]’s recycling efforts ‘will not significantly reduce its enormous (and growing) plastic footprint,’” The Guardian reported.

According to The Washington Post, Oceana sent “secret shoppers” to 186 stores in 25 cities that “Amazon claimed as alternative recycling drop-off points for plastic film, but representatives at 41 percent of the stores said Amazon plastic packaging was not being accepted for recycling at their locations.”

“Managers at more than 80 percent of the stores visited told the secret shoppers that they did not know their store was listed as a drop-off location for the recycling of Amazon packaging,” the Oceana report said, as The Washington Post reported.

Amazon has stopped using “single-use thin film plastics in packaging by using paper cushions instead of bubble wrap and air pillows” in India, reported Mufson. And it has plans to stop the use of single-use plastic in its packaging in Germany.

“Oceana said Amazon’s moves in Germany and India only showed that the retailer could do the same in the United States and other markets,” Mufson reported.

“The company is doing great stuff, but it is not stepping up to say here’s our current usage and here’s what we’re doing to reduce it,” said Littlejohn, as reported by The Washington Post. “Our recommendation is they are doing good work and should own it and measure it.”

“We understand people need Amazon. And so we’re hoping Amazon can fix this problem and become a leader in reducing plastic, which is really important for the oceans,” Littlejohn said.