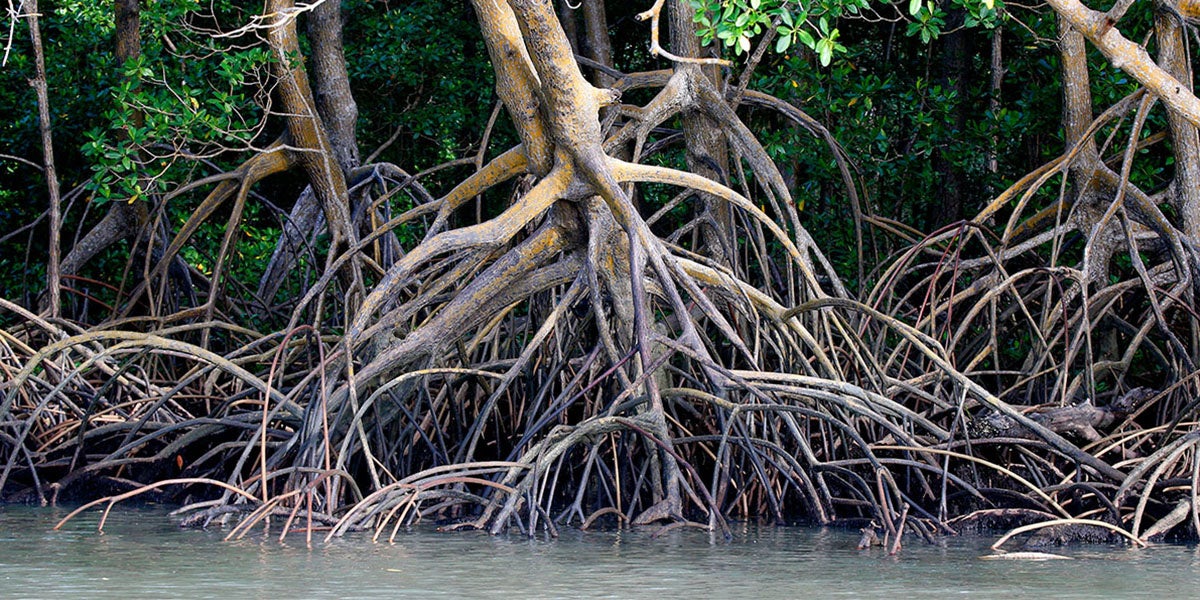 The vast mangroves of the Amazon store twice as much carbon per hectare as the region’s tropical forests, new research shows.

However, the wetlands face threats from deforestation and climate change, the researchers say. Introducing more measures to protect mangroves will be key to preserving its large carbon store, they add.

The findings provide “yet more evidence of the extraordinary carbon stocks found in mangroves” worldwide, another scientist told Carbon Brief.

Mangroves are trees and shrubs that grow in coastal waters across the tropics and subtropics. They are most easily recognized by their tall protruding roots, which they use to anchor themselves against incoming tides.

The new study, published in Biology Letters, is the first to make an on-the-ground estimate of how much carbon is stored in the Amazon’s vast wetlands.

It finds that, on average, Amazon mangroves store 511 tonnes of carbon per hectare—roughly double that of the region’s rainforests. Writing in their research paper, the authors said:

“The carbon stocks of the Amazon mangroves were over twice those of upland evergreen forests [rainforests] and almost 10-fold those of tropical dry forest [savannahs].”

For the study, the researchers visited nine mangroves—along with three salt marshes (a type of coastal grassland)—within the Brazilian Amazon.

At each site, they took measurements of the amount of carbon stored “aboveground,” in the trees and fallen leaf litter, and “belowground,” in the roots and soil.

To measure carbon stocks, the researchers measured changes to “biomass”—the weight amassed from the production of new leaves and shoots, or the thickening of a tree trunk, for example.

Plants take in CO2 from the atmosphere during photosynthesis and later use it to build and extend their trunks, stems and roots. Because of this, measuring changes to biomass gives scientists an idea of how much carbon is being stored in a given area over time.

The researchers then compared their estimates to previous data on carbon storage in the Amazon rainforest.

The chart below shows the average amount of carbon stored in tonnes per hectare by Amazon mangroves (far left) and Amazon rainforests (second left). The charts also include results from the salt marshes (second right) and data taken from a previous study by the researchers undertaken in desert-like “Caatinga” and savannah-like “Cerrado” ecosystems. 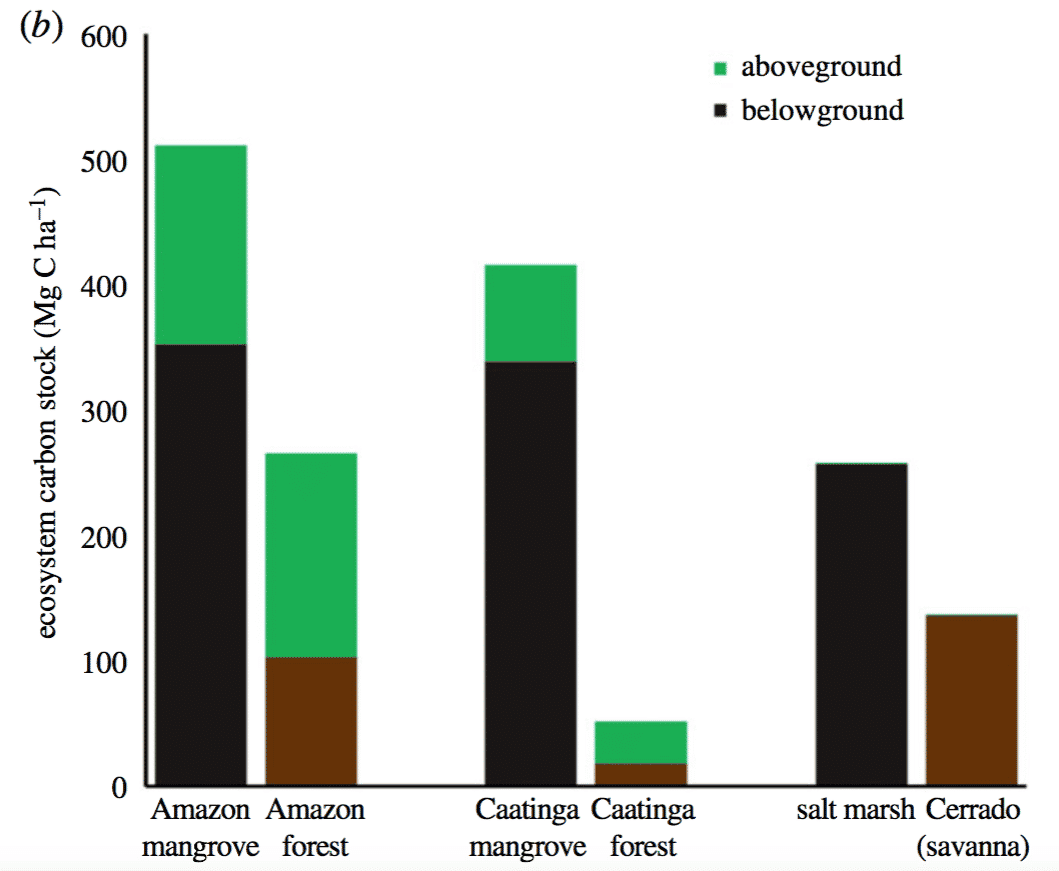 The results show that, on average, Amazon mangroves store around twice as much carbon per hectare as Amazon forests.

The majority of the carbon stored by mangroves is held in the soil, the research shows. Wetland soils tend to be carbon-rich because they are waterlogged, which slows the rate at which plant matter decomposes.

When decomposition is slow, carbon-rich materials are able to build up, explained Dr. Mark Spalding, a marine scientist and honorary fellow at the University of Cambridge, who was not involved in the study. He told Carbon Brief:

“The soils are very carbon rich. This is because they are permanently waterlogged and, so, carbon doesn’t break down. Freshwater peats have similar soil carbon concentrations.”

The tightly-packed nature of mangrove trees also enhances carbon storage in comparison to forests, which tend to be more sparse, he added.

The results suggest that protecting the Amazon wetlands could play a larger role in slowing climate change than previously thought, the authors say.

Amazon wetlands are currently threatened by deforestation—often to make way for fish farming—as well as rising temperatures, which could cause wetlands to dry out by increasing rates of evaporation. In their research paper, the authors said:

“The vast extent of Brazilian mangroves coupled with the large quantities of greenhouse gas emissions that results from deforestation underscores their potential value in climate change mitigation.”

The findings provide evidence of the “extraordinary carbon stocks found in mangroves,” Spalding said, but a key question remains about how stable this carbon is:

“Whether this carbon is short-lived or whether a significant proportion is being buried for the long-term in offshore sediments is a very important research question.”