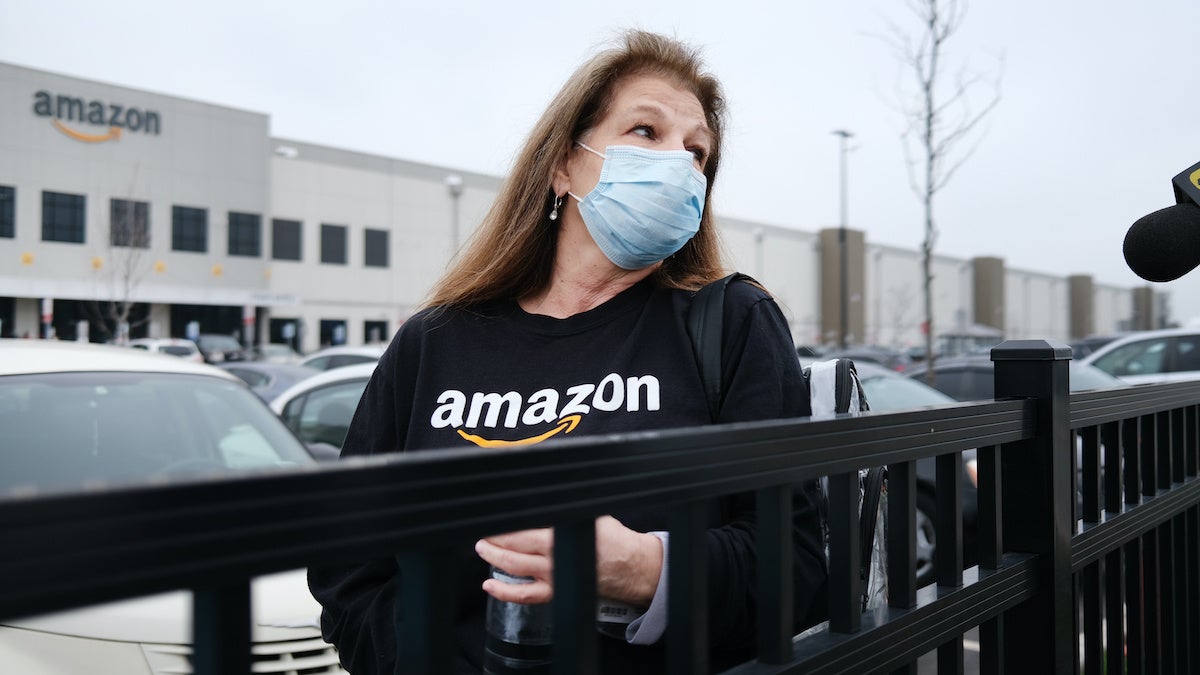 Amazon employees hold a protest and walkout over conditions at the company's Staten Island distribution facility on March 30, 2020 in New York City. Workers at the facility, which has had numerous employees test positive for the coronavirus, want to call attention to what they say is a lack of protections for employees who continue to come to work amid the coronavirus outbreak. Spencer Platt / Getty Images

Amazon fired two Seattle-based employees who had been with the company for 15 years for their outspoken stance that criticized warehouse working conditions during the coronavirus pandemic.

Another employee at a Minnesota warehouse was also fired after speaking up about that facility’s treatment of employees who continue to come to work amid the coronavirus outbreak, according to CNBC.

The e-commerce giant said two user experience designers, Maren Costa and Emily Cunningham, were fired for what it called repeated violations of internal policies, without specifying which ones. According to Reuters, Costa and Cunningham gained prominence for pushing the company to address the climate crisis and had recently made public statements questioning Amazon’s pandemic safety measures.

According to Ars Technica, Costa and Cunningham posted tweets in March offering to match donations to a fund set up to support workers exposed to COVID-19 at Amazon’s warehouse in Queens.

Amazon also dismissed Bashir Mohamed, a warehouse worker in Minnesota, for inappropriate language and behavior. However, Mohamed told BuzzFeed News that in addition to organizing workers to advocate for better working conditions, he had begun pushing for more rigorous cleaning and other measures to protect against the transmission of the coronavirus. Mohamed, who worked at the warehouse for three years, said he believes that his workplace advocacy is why he was fired.

“Workers have every right to voice their concerns to management, especially if they feel their safety is being compromised. Amazon should do everything it can to listen, protect and support its workers,” Sen. Bob Menendez (D-NJ), who has often criticized the company for its treatment of workers, said in a statement, as CNET reported.

Sen. Cory Booker, a fellow New Jersey Democrat, tweeted a link to a Washington Post article about Amazon’s actions and said, “The right to organize is a bedrock of our economy, responsible for many of the greatest advances achieved by workers over generations. Workers should be free to organize and strike for workplace protections without fear of being fired.”

Bernie Sanders tweeted a direct shot at Amazon’s CEO. “Instead of firing employees who want justice, maybe Jeff Bezos — the richest man in the world — can focus on providing his workers with paid sick leave, a safe workplace, and a livable planet,” Sanders wrote with a link to the Washington Post article.

The recent firings follow the March 30 firing of Staten Island, NY warehouse protest leader Christian Smalls on the grounds that he put others at risk by violating his paid quarantine when he joined a demonstration at Amazon’s fulfillment center, according to Reuters.

“Taking action cost me my job,” Smalls said in an interview on Bloomberg TV. “Because I tried to stand up for something that’s right, the company decided to retaliate against me.”

In statements shared with Reuters, Cunningham said she believed Amazon could play a powerful role during the crisis, but to do so, “we have to really listen to the workers who are on the front line, who don’t feel adequately protected.”

Costa said in her statement, “No company should punish their employees for showing concern for one another, especially during a pandemic!”

The shuttering of brick and mortar stores during the pandemic has allowed Amazon’s business to surge. Meanwhile, employees in Chicago, Detroit and New York have staged walkouts and protests at Amazon facilities in recent weeks in response to what workers say is the company’s insufficient response to the coronavirus pandemic, according to BuzzFeed News.

As of last week, more than 70 Amazon facilities had at least one employee who tested positive for COVID-19, the disease caused by the coronavirus, according to the Athena Coalition, an alliance of advocacy groups that focuses on working conditions at Amazon, as BuzzFeed News reported.