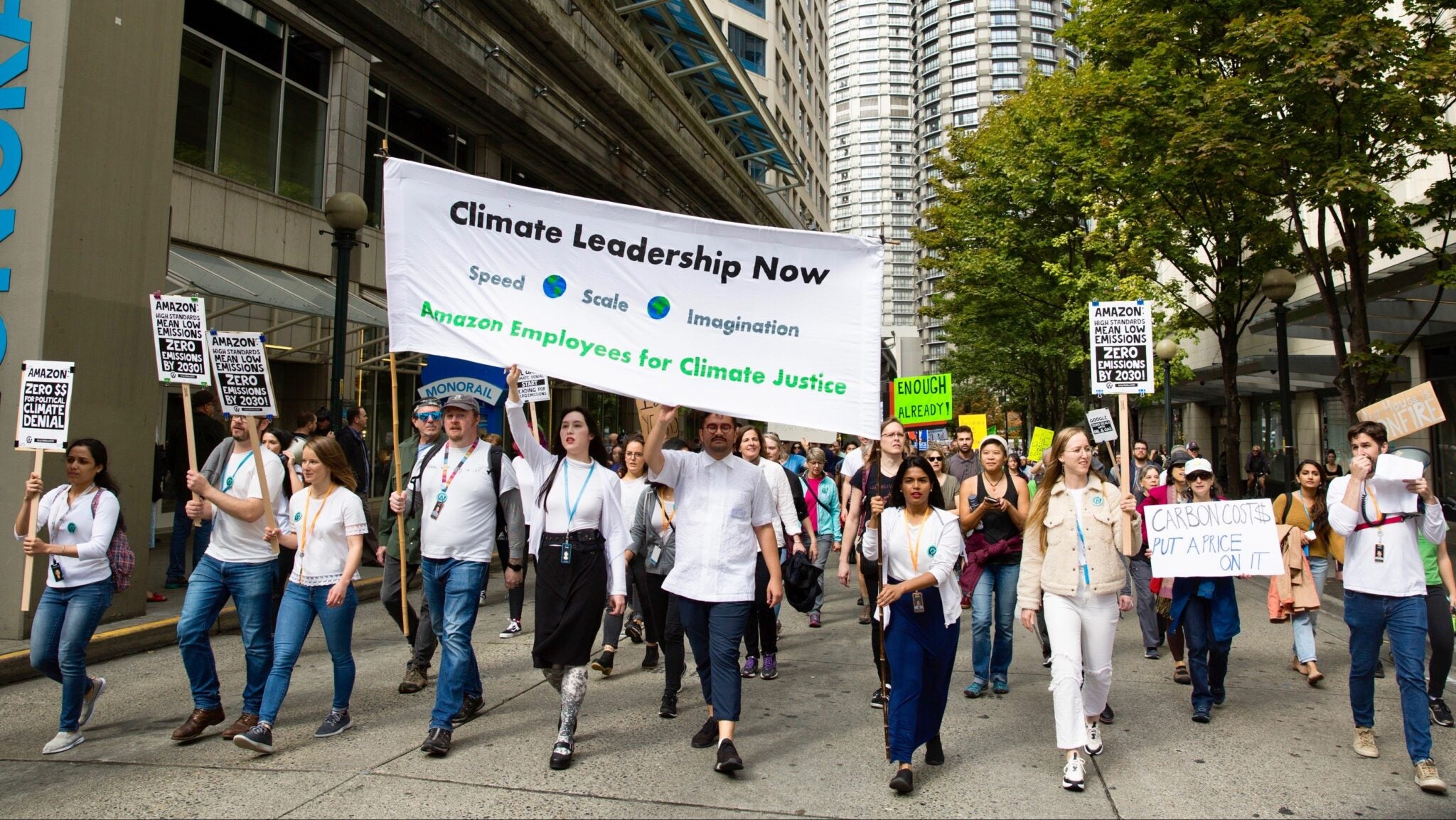 Amazon employees who speak out about the climate crisis say they have been threatened with firing.

Amazon Employees for Climate Justice (AECJ) said Thursday that the company’s legal and HR teams had questioned some of their members about public statements they had made urging Amazon to take climate action. Some also received emails saying they would be fired if they continued to speak up.

[Read about Amazon employees who want the company to act on climate.]

We must be able to speak up. Here is our press response to Amazon’s intimidation tactics. 3/ pic.twitter.com/7DqhCw09Yf

“It was scary to be called into a meeting like that, and then to be given a follow-up email saying that if I continued to speak up, I could be fired,” user experience principal designer Maren Costa, one of the targeted employees, told The Guardian. “But I spoke up because I’m terrified by the harm the climate crisis is already causing, and I fear for my children’s future. Any policy that says I can’t talk about something that is a threat to my children – all children – is a problem for me.”

Costa said she was one of four employees who had been questioned and one of two threatened with firing.

Costa had spoken to The Washington Post in October about how Amazon’s cloud computing helps with oil and gas exploration, the paper reported. She was called into a meeting to discuss her comments that month, and then received an email saying she had violated the company’s external communications policy and that any future violation could “result in formal corrective action, up to and including termination of your employment with Amazon,” according to The Washington Post.

Jamie Kowalski, who also spoke to The Washington Post with Costa in October, received a similar message. Employee Emily Cunningham was separately told she had violated Amazon policies by speaking to reporters and on social media.

AECJ said that Amazon had updated its communications policy one day after the group announced it would participate in the Global Climate Strike Sept. 20, 2019. The updated policy requires employees to get prior approval before speaking publicly about the company while identified as an employee.

“Amazon’s newly updated communications policy is having a chilling effect on workers who have the backbone to speak out and challenge Amazon to do better,” software engineer Victoria Liang said in a statement reported by The Guardian. “This policy is aimed at silencing discussion around publicly available information. It has nothing to do with protecting confidential data, which is covered by a completely different set of policies.”

Amazon countered that the new policy had been in development since spring and was not intended to target any group of employees.

“Our policy regarding external communications is not new and, we believe, is similar to other large companies,” a company spokesperson told The Guardian. “We recently updated the policy and related approval process to make it easier for employees to participate in external activities such as speeches, media interviews, and use of the company’s logo. As with any company policy, employees may receive a notification from our HR team if we learn of an instance where a policy is not being followed.”

The earlier policy had required employees to get email permission from senior vice presidents before talking to the press, but was not often enforced with activists, The Washington Post reported. The new policy introduced an intranet page employees could use to get permission from lower-level executives before speaking publicly. Approval can take up to two weeks and requires a “business justification.”

AECJ burst onto the scene in April of last year with an open letter urging the company to adopt climate policies such as halving emissions by 2030, phasing out fossil fuel use and compensating employees impacted by extreme weather events. The letter was eventually signed by 8,703 employees.

The employees also tried and failed to push through a shareholder resolution calling for climate action.

However, a day before September’s climate strike, CEO Jeff Bezos announced the company would be entirely powered by renewable energy by 2030 and would be carbon neutral by 2040, BBC News reported.

AECJ said it would continue to push the company to take action, despite Bezos’ promises and HR’s threats. The employee activists are calling for the company to stop facilitating oil and gas exploration with its cloud computing and to stop donating to climate denying politicians. They also want it to pursue carbon neutrality by 2030, not 2040.

“Amazon’s policy is not going to stop the momentum tech workers have built over the past year at Amazon,” data engineer Justin Campbell said in a statement reported by The Guardian. “The climate crisis is the greatest challenge we face, and the only way we can find solutions is by protecting people’s right to speak freely and disrupting the status quo.”