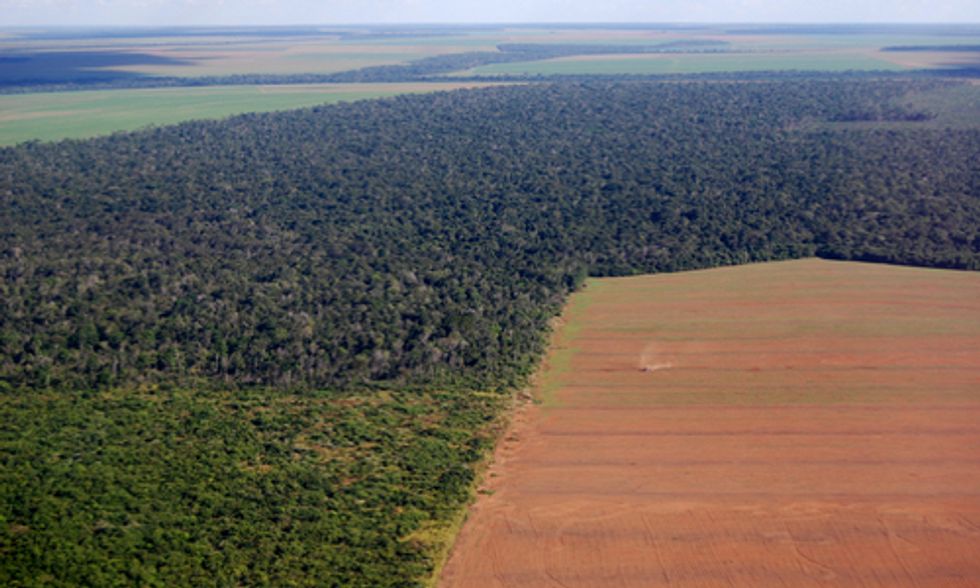 The continued destruction of the Amazon to exploit its resources for mining, agriculture and hydro-power is threatening the future of the South American continent, according to a report by campaigning groups using the latest scientific data.

Deforestation of the Amazon, as shown here in Brazil, endangers the future of the South American continent.
Photo courtesy of Shutterstock

Five countries—Bolivia, Brazil, Colombia, Ecuador and Peru—share the Amazon, and for all of them the forest area occupies more than 40 percent of their territory. All face threats to their water supply, energy production, food and health.

In addition, the report says, because of the over-exploitation of the region, rainfall will fall by 20 percent over a heavily-populated area far to the south of Amazonia known as the La Plata basin, covering parts of Argentina, Brazil, Bolivia, Paraguay and Uruguay.

Last month it was reported that deforestation in Amazonia had increased by almost one-third in the past year, with an area equal to 50 football fields destroyed every minute since 2000.

The report, the Amazonia Security Agenda, authored by the Global Canopy Programme and CIAT, the International Centre for Tropical Agriculture, says the prosperity of the region is based on the abundance of water.

There always seemed to be an endless supply of water, but the combination of industrial and agricultural pollution and droughts is creating a once unthinkable vulnerability for the five countries of Amazonia.

The huge wealth being generated from the forests comes with large-scale environmental and social costs. Local people do not benefit, and the profits from minerals, mining and agriculture are syphoned out of the region.

The large-scale economic development of the region causes deforestation. That in turn is threatening not only the wellbeing of the local people but the economic stability of the industries themselves.

Climate change is adding to both the uncertainty and the instability. Increasing temperatures, as much as 3.5 degrees Celsius in the near future, changing rainfall patterns and more intense and frequent extreme weather events will have further impacts on the health and well-being of the population. Energy supply from hydro-electric dams will decline.

Among those welcoming the report is Manuel Pulgar, Peru's environment minister. He will play a leading part when the country’s capital, Lima, hosts the twentieth summit of the UN Framework Convention on Climate Change in Dec. 2014.

“Climate change is a global problem, but one that will multiply local and regional problems in unforeseeable ways," said Pulgar. "In Latin America, we have taken Amazonia and its seemingly limitless water and forests as a given. But recent unprecedented droughts have shown us just what happens when that water security falters ... ”

The report says the impacts of environmental degradation that have so far been felt in other parts of the world are now likely to be felt in Amazonia, threatening economic development and security.

Governments in the region, it says, need to recognize that development cannot continue without recognizing the damage caused to the water supply and the climate both globally and locally. Policy makers need scientists to monitor changes to conditions and the economic risks they pose.

Trillions of Tons of Water

These findings must be shared between academic institutions and governments so that they can decide how to remedy the problem. Annual reviews of dangerous hotspots are also needed, and cross-border groups of experts who could help both national and regional development plans to be worked out.

Carlos Klink, Brazil’s national secretary for climate change and environmental quality, endorsed these findings. “We are understanding more and more how interdependent water, food, energy and health security are across our continent."

“There is also interdependence between the countries that share the Amazon, which recycles trillions of tons of water that all our people and economies rely on," Klink continued. “The challenge that we are just beginning to recognize and act upon is one of transitioning to a more sustainable economy—one that values the role of a healthy Amazonia in underpinning long-term security and prosperity.”

Visit EcoWatch’s WATER and BIODIVERISTY pages for more related news on this topic.