Satellites are mechanical reporters of the Amazon deforestation process. By documenting the degradation and gaps created by the clear-cutting process over the years, they deliver the verdict: Two-thirds of the Amazon’s deforested area has been turned into pastures.

From the ground, the cattle count reveals that the Amazon is home to more cattle than people. By 2016, the region’s cattle numbers amounted to 85 million head, compared to a human population of 25 million—more than three cows per person. In the city of São Félix do Xingu, which contains the largest herd in Brazil, this proportion reaches 18 cows to 1 person. 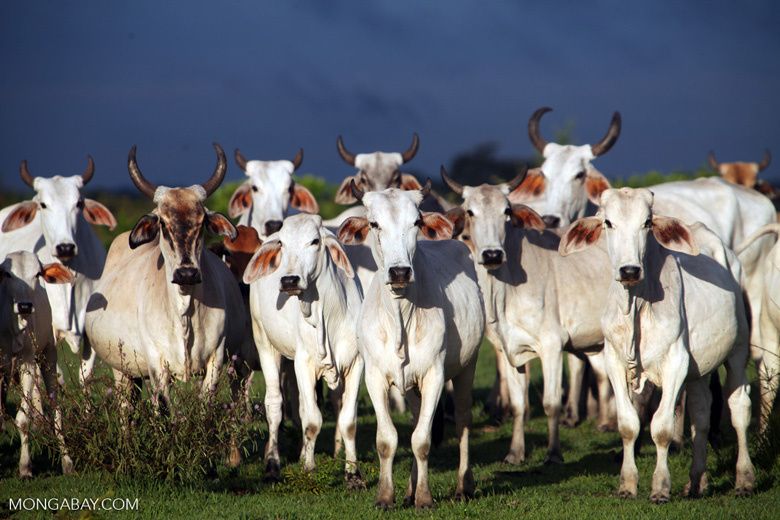 The Imazon study linked most Amazon deforestation to just 128 slaughterhouses.Rhett A. Butler / Mongabay

So it was that when the NGO Imazon finished a new and detailed survey on the region’s slaughterhouses, they received a major surprise: finding that a small number, just 128 active slaughterhouses belonging to 99 companies, are responsible for 93 percent of the annual slaughter—close to 12 million head.

The fact that slaughterhouses represent a bottleneck in the livestock breeding chain was already known. But Imazon’s survey breaks new ground because it clearly reveals the geography of livestock production in the Brazilian Amazon, documenting the area of influence—the amount of pasture required to fulfill the supply demands of each of the 128 slaughterhouses.

To put things in perspective, fulfilling the annual processing capacity of a single large meat processing plant requires almost 600 thousand hectares (2,317 square miles) of pasture, an area more than seven times larger than New York City. The set of slaughterhouses analyzed in the study, operating at full capacity, would require a pasture area of 68 million hectares (262,559 square miles, or roughly the size of Texas). Importantly, this amount exceeds the total pasture area available in the region today, indicating that in the near future cattle ranching will generate more Amazon deforestation.

With this reality in mind, the Federal Public Ministry (MPF), the independent federal prosecutor’s office, has pressured the region’s slaughterhouses to sign the so-called Beef Agreement since 2009, starting in the state of Pará. This contract, made between the MPF and each signing slaughterhouse, commits the firms to inspections of the pasture land where acquired animals originated, in order to ban cattle pasture expansions resulting in deforestation.

Paulo Barreto, the Imazon study lead researcher, explains the practicality of the processing plant contracts: “It was like having two options to address this issue: gathering managers for each of these 100 slaughterhouse firms in a conference room or, alternatively, filling five huge soccer stadiums with all the farmers involved in cattle ranching.” 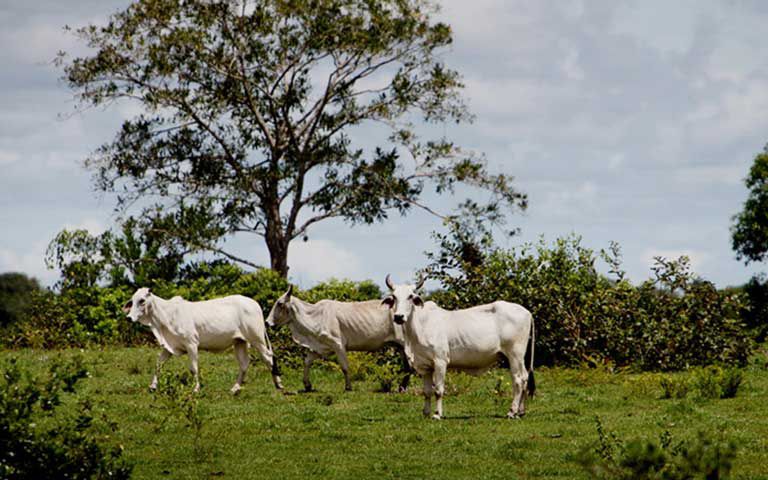 Fulfilling the annual processing capacity of a single large meat processing plant in the Amazon requires almost 600 thousand hectares (2,317 square miles) of pasture, an area more than seven times larger than New York City. The need for so much pasture has resulted in significant deforestation.Rhett A. Butler / Mongabay

The analysis detailing the influence of so few slaughterhouses on almost the entire Amazon cattle industry involved detective work and geo-processing technology.

The first step was to obtain the addresses of every large meatpacking plant and certify them by using high-definition satellite images to look for typical facilities, such as corrals and wastewater treatment systems. From there, researchers wanted to answer two questions: What was the potential cattle supply range for each slaughterhouse? And, how do these potential pasture supply zones relate to already deforested areas and to those that are at higher risk of deforestation in the near future?

The researchers determined the maximum distance between each slaughterhouse and its suppliers by interviewing local managers by phone, then crossing data. There were extreme cases at both ends of the spectrum, including one plant in the state of Acre which did not buy cattle raised any farther away than 20 kilometers (12.4 miles) from their door. On the other extreme, a slaughterhouse in the state of Amazonas acquired animals from more than 1,000 kilometers (621 miles) away to compensate for a local livestock shortage during the dry season.

The study dealt with two slaughterhouse categories: those with a state license, which allows them to sell meat within their states; and those with a federal license, allowing the firms to sell country-wide and for export. On average, meatpacking plants with state licenses have the capacity to slaughter 180 animals per day, and buy from farms that can be up to 153 kilometers (95 miles) away. Plants with national licenses can slaughter 700 animals per day, brought from up to 360 kilometers (223 miles) away.

The next step in the analysis process, based on the maximum pasture to meat processing plant distances, was to establish the potential area that supplied each slaughterhouse—a goal accomplished with geospatial technology. 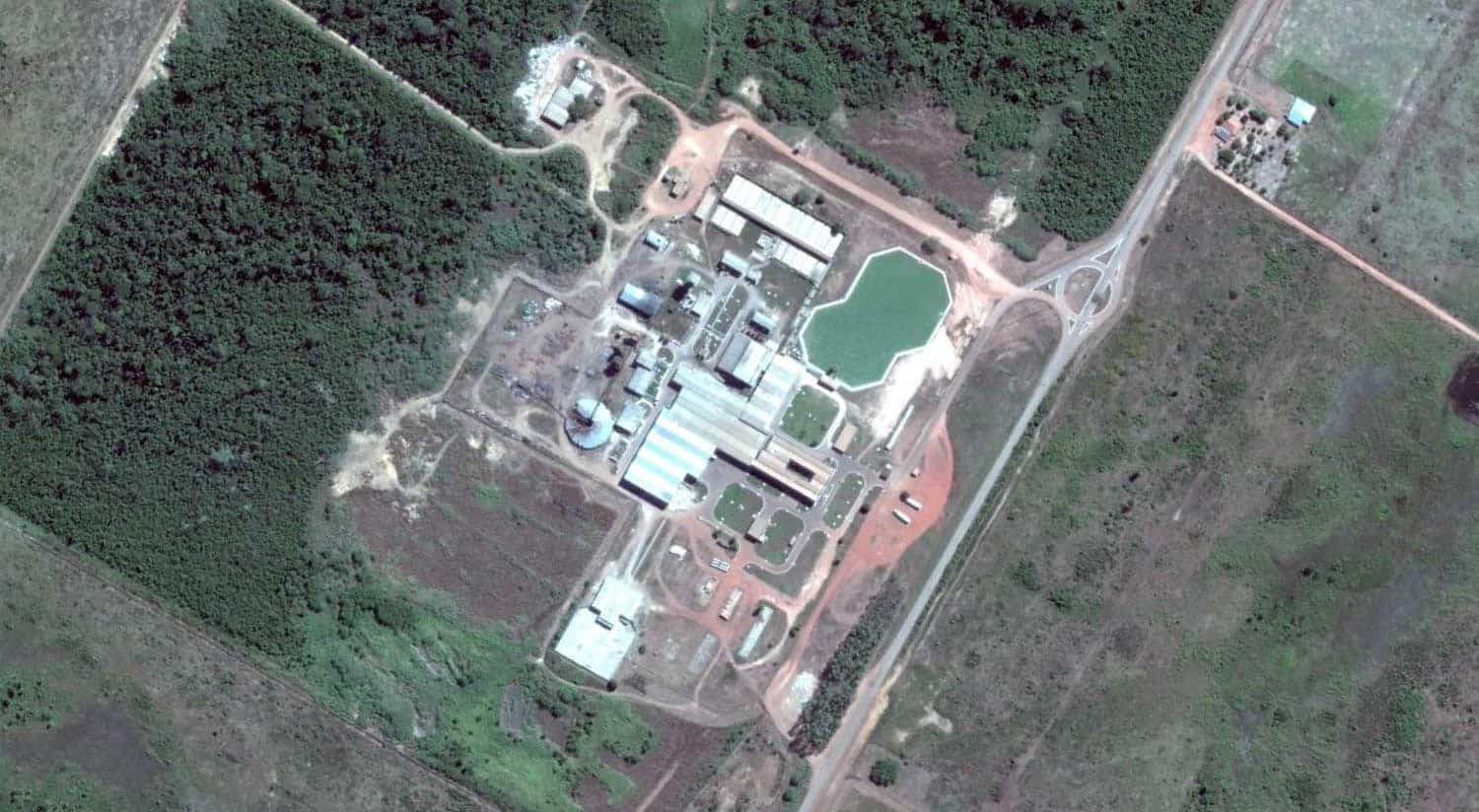 Satellite image of the JBS slaughterhouse in Santana do Araguaia, in the state of Pará, Brazil. Google Earth

“Imazon has an extensive database of formal and informal roads in the Amazon, which has been updated since 2008,” said Amintas Brandão Jr., a study co-author. “We ran a spatial analysis in which you insert the coordinates of the slaughterhouse in the software and its maximum buying distance, say 100 kilometers. Then the software automatically goes through all the roads and navigable rivers accessible to that slaughterhouse up to those 100 kilometers distant. Thus, we have been able to delineate a potential supply zone.” According to Brandão, this was the study’s novelty: it establishes each slaughterhouse’s area of influence using the infrastructure network—the systems of roads and navigable rivers through which cattle can be transported.

Importantly, the total pasture zone of influence corresponding to all 128 analyzed slaughterhouses covers almost the entirety of areas embargoed due to deforestation by Ibama, the federal agency that polices environmental offenses. It also matches 88 percent of all deforestation that occurred in the Amazon between 2010 and 2015.

Also importantly, the study generated a forecast of the most likely future deforested areas in the Brazilian Amazon.

Again, the researchers utilized geospatial analysis software. They divided the entire region into a grid of 1 kilometer-wide squares. The probability of future deforestation was estimated for each square based on the presence of factors that stimulate forest destruction, such as available roads or rivers for transportation, distance to markets and land production potential. Using this data, they created a map of deforestation probability for the entire Brazilian Amazon. Then the researchers used the deforested area for the three previous years—1.7 million hectares (17,000 square kilometers; 6,564 square miles)—as an estimate of total forest loss that can happen in the three year period between 2016 to 2018. Based on this probability map, they determined the areas under higher risk of new deforestation. The last step was to overlap these projections and the slaughterhouses’ zones of potential supply. The match between the two was 90 percent.

In other words, if the current deforestation rates are repeated between 2016 and 2018, 90 percent of new forest loss will occur within the estimated cattle supply zone of 128 slaughterhouses. 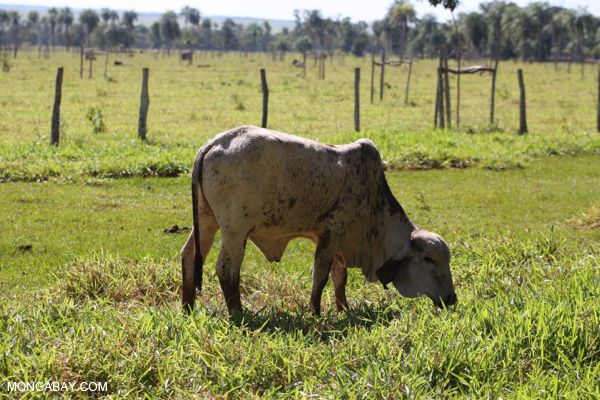 If the Amazon’s current deforestation rate is repeated between 2016 and 2018, then 90 percent of new forest loss will occur within the estimated cattle supply zone of the 128 slaughterhouses.Rhett A. Butler / Mongabay

“From the surveillance point of view, this work can help control deforestation by showing where its hot spots are,” said Brandão.

According to Barreto, “it is impressive how small is the number of slaughterhouse firms that sit at the end of a [cattle supply] chain that involves almost 400,000 ranchers.” For him, this confirms that the best way to reduce forest loss due to livestock is to involve the slaughterhouses in the deforestation surveillance, as the MPF agreements require.

But Barreto also points out problems with this approach: 30 percent of the slaughters are done by meat processing firms that have not signed the Beef Agreement. That means that these firms do not inspect the place of origin of their cattle. Worse, these slaughterhouses are located in the same area of activity as those who have signed the agreement, thus becoming alternatives for the sale of cattle raised in illegally opened pastures.

Imazon’s study created a detailed picture of the influence that slaughterhouses can have on deforestation. “We already have a map, and the technologies are available to trace cattle from the ranches where they are bred all the way to intermediate fattening ranches, and to the slaughter sites,” said Barreto. “Now, we need consistent legal pressure and punishment for breeders and meatpackers who condone environmental crimes.” 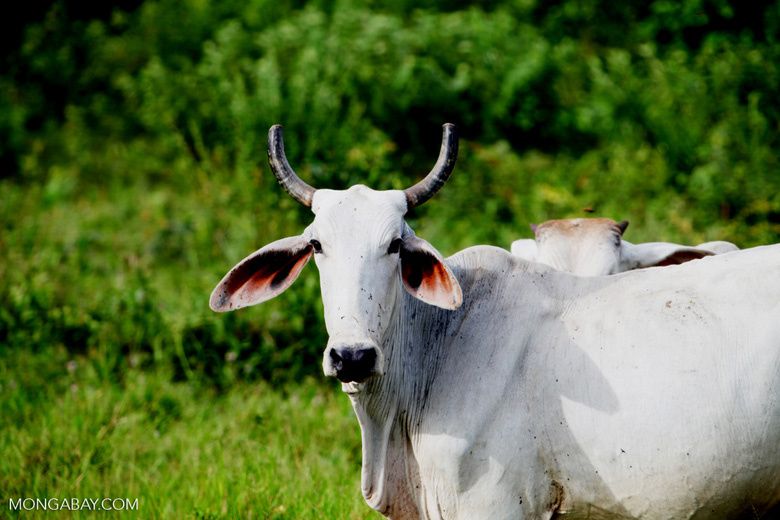 The new study forecasts that serious Amazon deforestation will likely continue to occur unless effective enforcement policies are adopted to monitor and control the pasture usage of the region’s slaughterhouses. Rhett A. Butler / Mongabay

This sort of pressure, he said, came from the market itself in the case of foot-and-mouth disease, when the cattle industry realized that it would lose global markets if an effective vaccination program wasn’t implemented. The pinch from the market led farmers to organize themselves and to partner with the government to effectively control foot-and-mouth disease, which was quite a feat.

Likewise, if the government and slaughterhouses have the will, he says, then they can work together to end ranching activities that bring down forests. For Barreto, a good starting point for reducing deforestation would be the creation of a new round of beef sector law enforcement pressure administered by the MPF and Ibama. Such a move would be a huge step toward achieving zero deforestation in the Amazon.

This article was originally published in Portuguese by ((o))eco and can be found here. Reposted with permission from our media associate Mongabay.