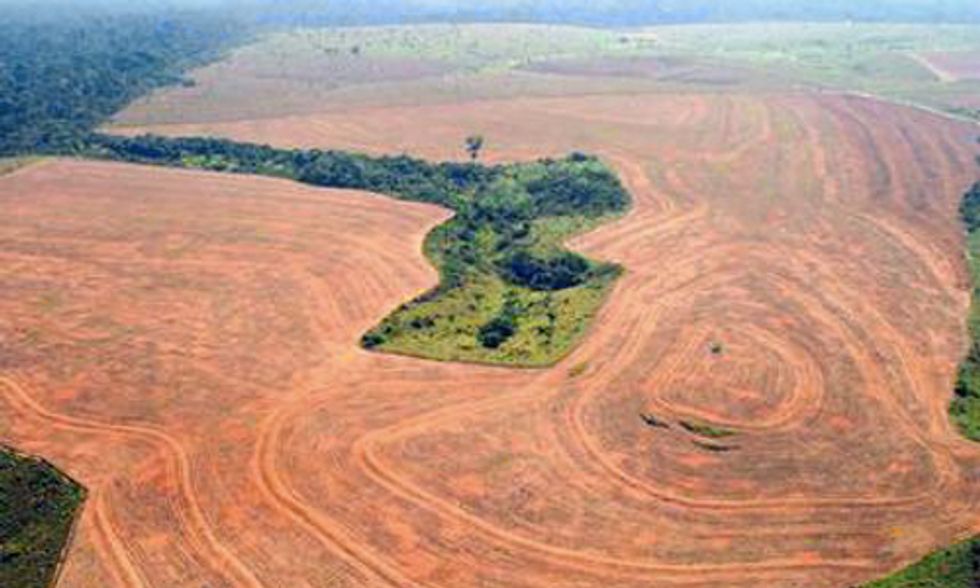 Last week, the Brazilian government released annual figures for deforestation in the Amazon and the news is not good. A total of 5,843 square kilometres are estimated lost between August 2012 and July 2013, an increase in deforestation of 28 percent compared to the previous year.

Last year's massive weakening of the Forest Code in the Brazilian Congress lead to a massive increase in deforestation of the Brazilian Amazon.

This sharp increase in deforestation in the Amazon is no surprise—all deforestation estimates released over the last year have shown we were headed in this direction. Last year, the government passed a new Forest Code, dramatically changing the environmental law that governs forest use in Brazil, including the Amazon.

A strong agribusiness influence in the Brazilian Congress lead to a massive weakening of the Forest Code—a law that once helped protect the Amazon. Those who believed the empty promises that the new Forest Code would bring governance to the Amazon, that amnesty granted to environmental criminals would not have consequences and that farmers in the Amazon would be moved by the spirit of Brazilian citizenship and legal compliance, can now see the reality of the impact of the new law in the forest. The ‘growth-at-all-costs’ model, based on the expansion of the agricultural frontier and the establishment of large infrastructure projects in the Amazon provides a sharp contrast to the image the government wants to sell.

Brazil can no longer hide behind the celebrated decrease in deforestation made in past years or the thinly veiled promises around the Forest Code. Brazil can hardly continue to claim leadership in sustainability and new models of development as all eyes turn to Brazil as hosts of the upcoming World Cup.

In 2009, the three largest slaughterhouses in Brazil signed the Cattle Agreement and pledged not to buy cattle from farms that were involved in new deforestation, slave labor or invasions into Indigenous land and protected areas in the Amazon. In 2006, the soy and cattle sector made commitments to move away from deforestation. The Soy Moratorium was signed by soy traders to stop the trade of soy coming from newly deforested land.

The Soy Moratorium is still in place today but it is set to expire in January 2014. If the industry fails to renew the moratorium without the proper safeguards and next steps in place, this could mean more bad news for the Amazon. We could see another dramatic increase in forest destruction as Soy expansion runs rampant through the forest.