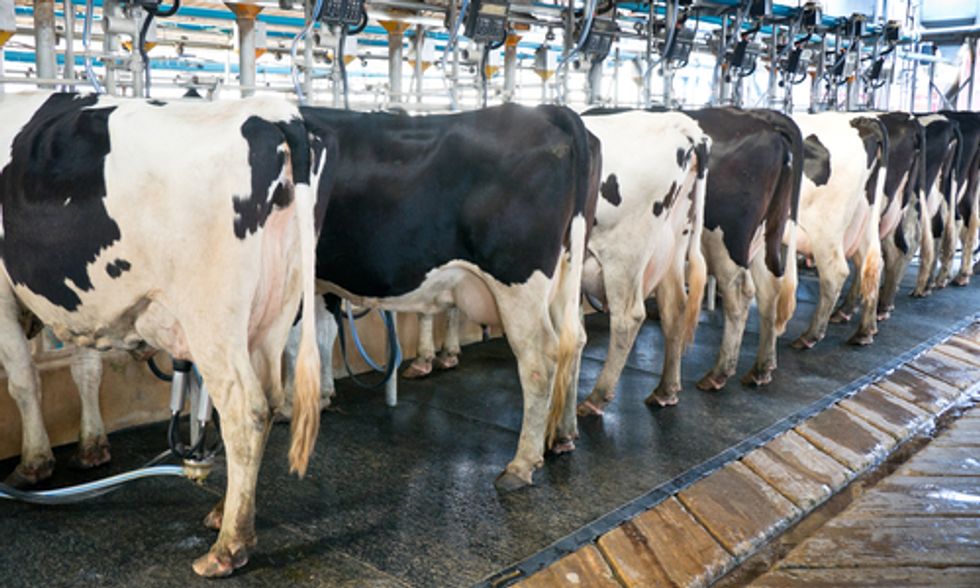 By Alexis Baden-Mayer and Katherine Paul

There are plenty of reasons to boycott milk from factory farms, beginning with your own health. Dairy cows raised on grass pastures produce milk that is higher in omega-3 fats, vitamin E and beta-carotene than milk from cows raised on grain. Milk from grassfed cows also contains five times as much conjugated linoleic acid, an unsaturated fat which protects against heart disease, aids in weight loss and may prevent cancer and diabetes, than milk from grain-fed cows.

Milk from factory farms, or Confined Animal Feeding Operations (CAFOs) that comes from cows raised on genetically engineered grains and pumped full of antibiotics and growth hormones—not exactly a recipe for healthy milk.

But it's not just your health that benefits when you boycott milk from factory farms. Industrial dairy farms, with their endless streams of waste, are a public health risk. Just one dairy-producing state, Wisconsin, produces cow manure in quantities equivalent to the human waste produced by the combined populations of Tokyo and Mexico City. New Zealand has a name for it: dirty dairying. And according to a Natural Resources Defense Council fact sheet, manure from dairy cows contaminated Milwaukee's drinking water with Cryptosporidium in 1993, killing more than 100 people, making 400,000 sick and resulting in $37 million in lost wages and productivity. Water contamination from dairies can also cause blue baby syndrome and miscarriages.

As for the health and well-being of the dairy cows that produce your milk, despite the pretty pictures of happy, grazing dairy cows on milk cartons and company websites, cows raised on factory farms endure intense, sustained cruelty. And most are eventually slaughtered for meat.

According to 2007 data provided by the U.S. Department of Agriculture (USDA), factory farms produce more than 80 percent of milk sold in the U.S. Organic milk sales account for only four percent of the market. The best way to shift those percentages is for consumers to boycott the industrial milk machine, and force the market to produce more alternatives.

Here are some basic guidelines to get started:

Buying certified organic milk is a good way to avoid the worst aspects of factory farms. Organic standards don't allow the routine, preventive use of antibiotics. Farmers have to give sick dairy cows antibiotics if they need them, but they can't sell their milk as organic until the antibiotics have left the animal's system. That means organic dairies aren't contributing to the public health crisis that's causing 23,000 people in the U.S. to die every year from antibiotic-resistant bacteria.

So to avoid milk from factory farms, the first step is to go organic. But not all organic milk is created equal. You'll also want to look for "grassfed organic," which has a number of advantages over "pasture-raised" organic.

It's safe to say that all organic dairy cows are "pasture raised." Organic rules for pasture-raised set a minimum standard requiring cows to get at least one-third of their diet from grazing on pasture for at least one-third of the year. You'll need to read the claims made on the milk carton and on dairy brand websites carefully to see if they're meeting or exceeding the organic pasture requirements.

If your organic dairy farm doesn't make any claims beyond "pasture raised," then you can expect that it's just meeting the minimum standard. Horizon Organic and the store-brand organic milks fall into this category. For a review of organic milk brands across the country, check out the Cornucopia Institute's Organic Dairy Ratings. The report is a little out of date—it's from 2008, before the organic pasture rules were finalized—but it's useful to know which brands have been doing the right thing all along.

Milk from dairy cows that are "grassfed" is superior to milk from "pasture-raised" cows. Under the USDA's definition of "grassfed," dairy cows must be raised on grass and forage exclusively, for their entire lifetimes. That means a higher quality of milk. So look for "grassfed" on the label. But also know that while the "pasture-raised" claim must be verified by a third-party certifier, verification of the grass fed claim is voluntary.

Organic Valley is the first brand to distribute nationally a 100-percent grassfed milk, called Grassmilk. The OCA encourages consumers to choose Grassmilk over "pasture-raised" organic. But we would also like to see Organic Valley take the extra step of earning a "USDA Process Verified," an "American Grassfed," or a Food Alliance Certified "Grassfed," seal, any of which would serve as verification of the brand's claim that all of its cows meet the USDA's definition of "grassfed."

Organic, yes, but read the label

We also recommend Organic Valley's Grassmilk because it doesn't contain Arachidonic Acid (ARA) and Docosahexaenoic Acid (DHA). Both of these synthetic nutrients are currently allowed in milk that has been certified organic, even though they aren't on the U.S. Food & Drug Administration's (FDA) list of essential vitamins and nutrients, and they haven't yet been added to the National Organic Program's (NOP) list of allowed non-organic substances. (ARA and DHA remain in legal limbo as Obama's USDA tries to clean up the mess left by the Bush Administration. One of the strongest arguments against ARA and DHA has been dismissed by the NOP: that they were created through mutagenesis, a genetic modification technique that can have the same dangerous unintended effects as genetic engineering. Earlier this year, the NOP announced that mutagenesis is allowed in organic as a classical breeding technique.)

If you want to avoid DHA, don't choose Horizon Organic milk. The label says it contains DHA Omega 3, which the company claims "supports brain health." A consumer lawsuit alleging this claim is false and misleading is pending.

One thing the USDA certified organic symbol won't guarantee? That the cows that produced your organic milk were humanely treated. So in addition to checking labels for "grassfed" and non-synthetic versus synthetic vitamins, look for products that are Animal Welfare Approved (AWA), in addition to USDA Organic. AWA standards prohibit inhumane practices that are allowed in organic, like dehorning. To check for products in your area, click here.

Raw milk and goat milk rarely come from cows raised in factory farm-like conditions. And there's a case to be made that both provide health benefits over and above grassfed organic milk from cows.

Natural health guru and OCA ally Dr. Joseph Mercola warns against pasteurized milk of any kind. According to Mercola, "once milk has been pasteurized it's more or less 'dead,' and offers little in terms of real nutritional value to anyone," because important enzymes and proteins are destroyed by the pasteurization process.

Raw milk from grassfed cows contains every important digestive enzyme. Not so for pasteurized milk. According to Mercola, the pasteurization process destroys lactase, which is necessary for the assimilation of lactose; galactase, required for the assimilation of galactose and phosphatase which helps the body assimilate calcium. This is why pasteurized milk is difficult to digest, which places stress on the pancreas, which can lead to diabetes and other health problems.

What about goat's milk? Is it a healthier choice? Does it guarantee humane treatment of the animals?  Prevention magazine compared the nutritional value of goat's milk to cow's milk and declared a tie.

As for buying goat's milk in order to boycott factory farms, livestock Rancher, lawyer and author, Nicolette Hahn Niman says, "There is no such thing as a goat factory farm." But that doesn't mean that goats can't be confined or treated cruelly. An investigation by the U.K. group, Viva, revealed industrial-style milking parlors and cramped conditions at goat farms. So again, if your goal is to avoid milk from factory farms, you'll want to check the source, even if you're buying goat's milk.

If in doubt, go vegan

One way to guarantee that you aren't buying milk from a factory farm is to go vegan. That means finding a vegan, non-dairy alternative to milk from cows or goats. Start by looking for non-dairy milk that is organic, free of synthetic ingredients, high in nutrition and is not made from soy (which is likely to be genetically engineered), or rice (which probably contains arsenic).

We recommend Manitoba Harvest's Hemp Bliss. But there's a catch. It's no longer sold in the U.S. You can buy direct online, but as the website explains, "due to product freezing" it can't be shipped (it comes from Canada) from November 1 through April 15. If you weren't able to stock up on Hemp Bliss before the snow started falling, there's an easy alternative:

Al Gore recently made headlines with his decision to go vegan. While he hasn't said so publicly, it's likely that his dedication to solving the problem of climate change contributed to his decision. As Ben Adler says in his recent article, "Al Gore is a vegan now-and we think we know why," a new National Academy of Sciences study shows that U.S. methane emissions from the factory farming of animal products may contribute as much to climate change as the entire U.S. transportation industry. According to a report by the United Nations Food and Agriculture Organization, the global dairy industry's share of total greenhouse gas emissions at four percent.

Whatever your motivation—your health, public health or concerns about animal welfare or climate change—there are alternatives to buying milk from industrial CAFOs. Check sources and brands, and read labels, carefully. And if you're dining out, avoid milk products completely, unless the restaurant can at a minimum, guarantee that all its milk products are certified organic.