Alfonso and Alfredo Cuarón at 'Green Day Venice': Is Fiction Needed to Tell the Facts? 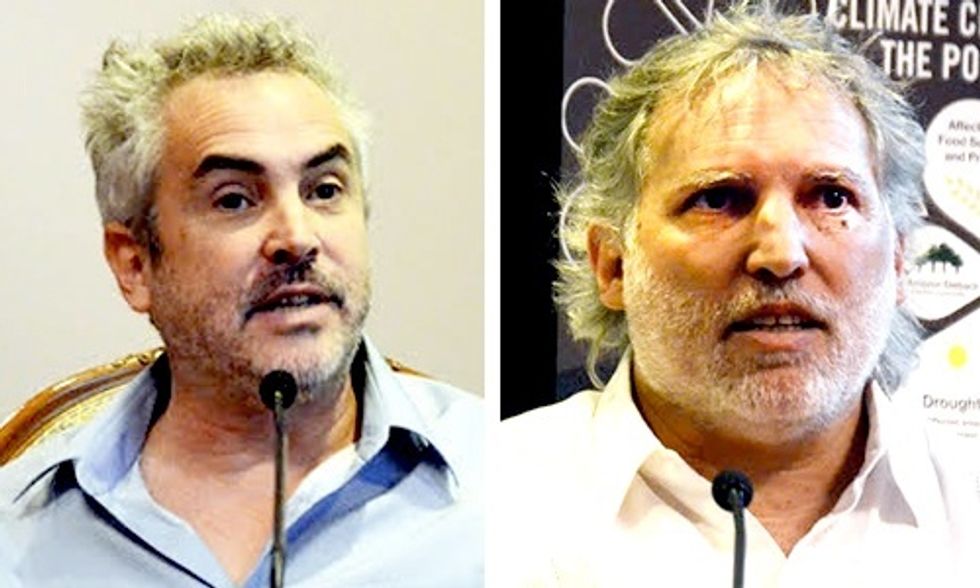 At the Venice International Film Festival this week, a captivating dialogue between two brothers—Oscar winning film director and president of the festival jury, Alfonso Cuarón and renowned environmental scientist Alfredo Cuarón set the scene not only for a fascinating series of events on how to increase sustainability within the film industry, but also for a whole new perspective on how we might solve the climate communication challenge.

“We’re about to live another Copernican revolution—a unique change," said Alfonso Cuarón. "It’s about empowering the next generation—we don’t have the solutions. We’re doing all we can with the knowledge we have, but the next generation will have different platforms to work from—they will be the ones to create new economic models."

The two brothers were in agreement that climate change must be tackled by each of us in our daily lives. Changing to efficient lightbulbs or reducing waste, for example, should be just common sense. But we cannot stop there, we have to go further.

For Alfonso, this means changing completely our economic model and establishing a new one. For Alfredo, who has worked for more than 30 years with communities in rural Mexico, it means understanding our environment as a living, fragile and complex system and making sure we work hard to respect the interconnectivity of all living things.

“We must remember that environmental impact eventually has a social impact," said Alfredo Cuarón. "What happens to our forests and rivers, for example, inevitably affects people as well.”

Both Alfonso and Alfredo agreed that the film industry can set an example by establishing sustainable guidelines for production and they stirred the capacity audience with tales of both concern and lack of concern for the environment within the industry. Reflecting on how productions could also integrate the issues into scripts, they both welcomed the possibility, but Alfonso reminded everyone that the creative process relies on artistic inspiration to tell impactful stories. He also railed against some disaster films that are jumping on the bandwagon of climate change with little substance.

“What is going on in film production when it illustrates the apocalyptic world is akin to pornography with little understanding of the science involved," continued Alfonso Cuarón. "Films such as these can have very negative effects."

Alfredo reminded all that scientific research must combine with art to communicate more effectively and if this is also linked to collective action right now, we will be able to create solutions.

“We all want peace and a better world—everybody does, but change is built step by step. Big changes have only happened a few times in history. It’s now time for another big change. The future is now,” said Alfredo Cuarón.

The event was organized by Film4Climate, a global initiative led by the World Bank Group’s Connect4Climate program in partnership with Green Cross Italy, the national branch of Green Cross International, an environmental non-governmental organization founded by Mikhail Gorbachev and active in more than 30 countries. The aim is to drive consensus across the film community on a shared set of global standards to sustainably produce motion pictures and participate in encouraging climate change awareness and action.

Before the discussion, winning films from the Action4Climate competition, designed to give voice to young aspiring filmmakers, were presented. The competition attracted more than 250 entries from more than 70 countries and highlighted the commitment of young creative people to take action on climate change.

Later in the day, Green Cross Italy hosted an animated discussion on how film producers and writers can best influence governments and constituencies in the race to limit the effects of climactic instability. Guest speaker Olivier René-Veillon from France’s Île-de-France Film Commission effectively described how the EcoProd program in France encouraged sustainable film making with considerable success over the past few years.

Green Cross Italy then presented the jury for the Green Drop Award, an annual recognition that Green Cross Italy assigns to the film that best interprets sustainability among those competing at Venice Film Festival. The Green Drop award jury includes distinguished practitioners from the worlds of show business, culture and science who are well known for their commitment to environmental protection and world peace.

World Premiere of Naomi Klein’s ‘This Changes Everything’