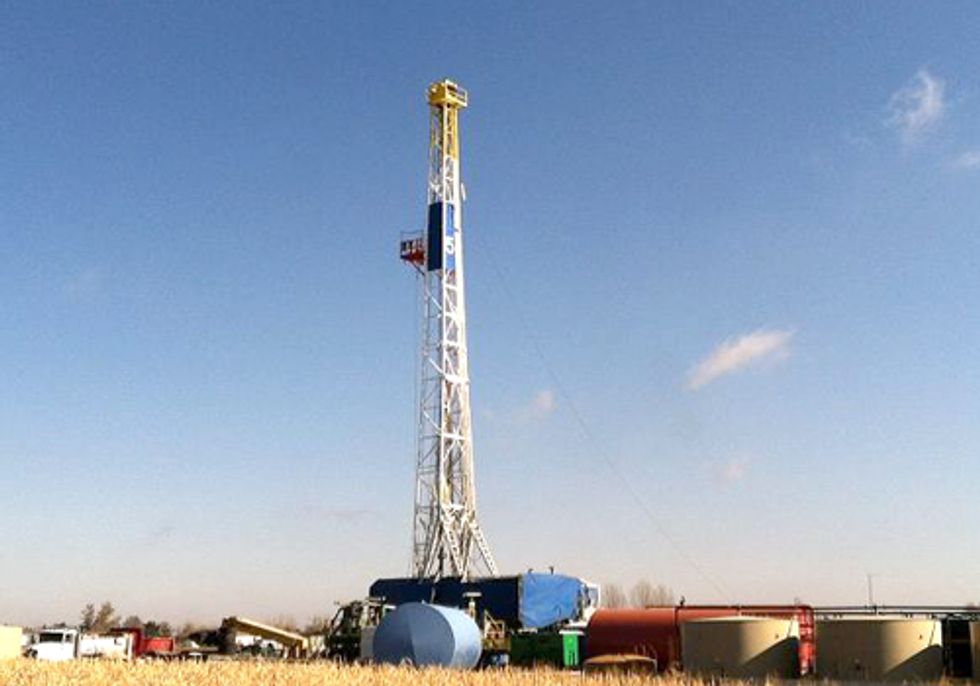 19th Century German statesman Otto von Bismarck once said, "If you like laws and sausages, you should never watch either one being made."

The American Legislative Exchange Council (ALEC), put on the map by the Center for Media and Democracy in its "ALEC Exposed" project, is the archetype of von Bismarck's truism. So too are the fracking chemical disclosure bills that have passed and are currently being pushed for in statehouses nationwide.

State-level fracking chemical disclosure bills have been called a key piece of reform in the push to hold the unconventional gas industry accountable for its actions. The reality, though, is murkier.

On April 21, The New York Times penned an investigation making that clear. The Times wrote:

Last December, ALEC adopted model legislation, based on a Texas law, addressing the public disclosure of chemicals in drilling fluids used to extract natural gas through hydraulic fracturing, or fracking. The ALEC legislation, which has since provided the basis for similar bills submitted in five states, has been promoted as a victory for consumers’ right to know about potential drinking water contaminants.

A close reading of the bill, however, reveals loopholes that would allow energy companies to withhold the names of certain fluid contents, for reasons including that they have been deemed trade secrets. Most telling, perhaps, the bill was sponsored within ALEC by ExxonMobil, one of the largest practitioners of fracking—something not explained when ALEC lawmakers introduced their bills back home.

The Texas law The Times refers to is HB 3328, passed in June 2011 in a 137-8 roll call vote, while its Senate companion bill passed on a 31-0 unanimous roll call vote. Since then, variations of the model bill have passed in two other key states in which fracking is occuring.

Like dominos falling in quick succession over the following months, Colorado, Pennsylvania and, most recently, the Illinois Senate passed bills based on the ALEC model. Louisiana also has introduced a similar bill.

Other states where the bill has been proposed but has not yet passed—or has been killed dead in its tracks—include Massachusetts, Maryland, New York, Indiana, California and Arkansas, according to the National Conference of State Legislatures.

The tale of how the Texas bill became a national model exemplifies the stranglehold polluter power and corporations like ExxonMobil—referred to as a "private empire" in investigative journalist Steve Coll's new book—have over both the federal government and statehouses nationwide.

But was ALEC the only trojan horse behind the loophole-filled bill? The short answer is "no"—here's why.

Lost in the shuffle of the ALEC Exposed discussion has been another corporate-funded bill mill that has flown almost entirely under the radar: the Council of State Governments (CSG). While a CSG 101 is worthy of a series of articles in of itself, it is worth pointing out a few basics:

Texas HB 3328 became a piece of CSG's SSL arsenal at its October 2011 National Conference, which took place in Bellevue, Washington. In other words, this was a CSG model bill roughly two months before it became an ALEC model bill.

"I have not seen the CSG model bill so I would not be able to verify it was the same language. A lot of times ALEC model bills are derived and introduced in states before they even come to ALEC," Todd Wynn, the ALEC Energy, Environment, and Agriculture Task Force director told DeSmogBlog in an interview.

"What is interesting is that there has been bipartisan support for hydraulic fracturing fluid disclosure all across the country. Even President Obama supports it, as he stated in his last State of the Union address," Wynn continued.

While no oil and gas industry lobbyists appear on the SSL "up/down vote" list, that does not necessarily mean they were absent from the Conference at-large, as the list of lobbyist attendees is not publicly available information.

That said, ExxonMobil and the American Petroleum Institute (API) were both Conference Sponsors at CSG's 2011 National Conference. ExxonMobil was a Gold Level Sponsor, while API was a Silver Level Sponsor. CSG Director of Membership, Marketing & Media, Kelley Arnold, told DeSmogBlog that CSG does not disclose how much money each sponsorship level is worth.

ExxonMobil was also the sponsor of the ALEC model bill.

It doesn't end there.

The disclosure standards found within both the CSG and ALEC models, in turn, were initially decided by a gas industry-heavy Obama Administration-created Panel formed in May 2011.

In May 2011, the Obama Administration Department of Energy (DOE) announced the formation of a panel to "study the practice of hydraulic fracturing (fracking), and determine if there are ways, or even a necessity, to make it safer for the environment and public health," as we reported on DeSmogBlog.

The other half of that equation we reported back in May: "Unfortunately, according to a report by the Environmental Working Group (EWG), the administration stacked the panel with oil and gas industry insiders."

EWG provided a list of these figures, as seen below:

Panel chair John Deutch, a former director of the Central Intelligence Agency, now on the board of Cheniere Energy, Inc., a Houston-based liquified natural gas company that, according to Forbes Magazine online, paid Deutch about $882,000 from 2006 through 2009. During a stint on the board of Schlumberger Ltd., one of the world’s three largest hydraulic fracturing companies, Deutch received about $563,000 in 2006 and 2007, according to Forbes.

Stephen Holditch, head of the petroleum engineering department at Texas A&M University and a leader in the field of hydraulic fracturing designs, first at Shell Oil, later as head of his own firm, acquired by Schlumberger in 1997. Today, he is engineering committee chairman at Matador Resources, a Dallas oil and gas exploration company.

Mark Zoback, a geophysics professor at Stanford and senior advisor to Baker Hughes, Inc., a Houston-based oilfield services company engaged in hydraulic fracturing. Zoback is chair of GeoMechanics International, a consulting firm that advises on various oil and gas drilling problems and that was acquired by Baker Hughes in 2008.

Kathleen McGinty, chair of the White House Council on Environmental Quality during the Clinton administration and a former secretary of the Pennsylvania Department of Environmental Protection, now senior vice president of Weston Solutions, Inc., which consults for the oil and gas industry, including leading natural gas driller Chesapeake Energy, and a director of NRG Energy, a Princeton, N.J., wholesale power generation company whose assets include more than two dozen natural gas companies.

Susan Tierney, assistant secretary of the Energy department under President Clinton, now managing principal of Analysis Group, which consults for utilities that use natural gas and for the Interstate Natural Gas Association of America, the natural gas pipeline industry association.

Also on the panel was a single environmental representative….kind of. That all depends on your definition of "environmental." Environmental Working Group explains it best:

The panel’s environmental representative is Fred Krupp, president of Environmental Defense Fund, a New York-based nonprofit that focuses on environmental issues. Scott Anderson, EDF’s senior policy advisor for energy and spokesman on hydraulic fracturing is a member of the Interstate Oil and Gas Compact Commission, which opposes extending the federal Safe Drinking Water Act to hydraulic fracturing. The commission website asserts that fracking “needs no further study." Anderson is a former executive vice president and general counsel for the Texas Independent Producers and Royalty Owners Association.

This industry friendly panel eventually published a report offering its advice on disclosure standards in August 2011, two months after the passage of the Texas bill. These standards were incorporated into both the Colorado and Pennsylvania bills that are copycats of the original Texas bill (which is now the ALEC/CSG model), according to blog posts written by the Environmental Defense Fund (EDF).

EDF's Role in the Process

The Texas bill, in turn, was written collaboratively by the EDF and gas industry insiders, according to Earthworks, an environmental advocacy group which also expressed other concerns with the bill, writing,

HB 3328 continues a long Texas tradition of letting the oil and gas industry decide what's best. It requires only incomplete chemical disclosure of fracturing fluids, no advance notice to landowners that this information is available, and has no provision for third-party challenges to any trade secret exceptions.

Most of HB 3328 focuses on how industry may claim a trade secrets exemption and avoid chemical disclosure, and with no provision for a water user or a landowner to challenge the claim.

Not the "Schoolhouse Rock" Version of Bill Creation

Roughly two weeks after the Phoenix Summit, this model bill passed in Colorado. Two months later, it passed in Pennsylvania.

One thing is for certain: This isn't anything like Schoolhouse Rock!'s "I'm Just a Bill" song that young children are taught in U.S. civics courses.

It sure looks more and more like Otto von Bismarck was right on the money (excuse the pun!) nearly two centuries ago.