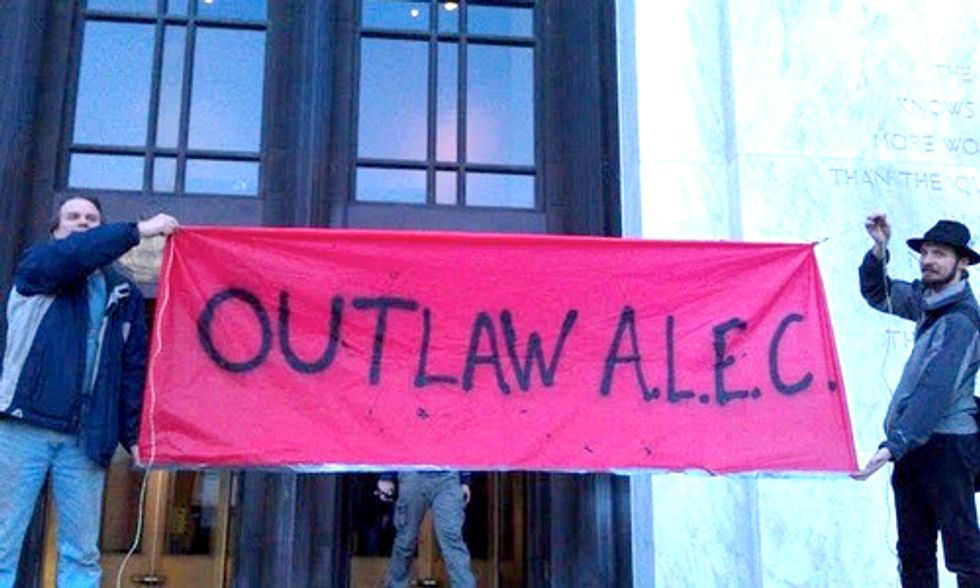 The American Legislative Exchange Council's (ALEC) December summit began this week, and the organization's anti-renewable energy resolution has been a major focus.

Backed by fossil fuel titans like Koch Industries and Exxon Mobil, ALEC has been trying all year to roll back renewable portfolio standards (RPS) in states across the country with little success. At most, bills were introduced in states where the primary sponsor has ties to ALEC, such as Ohio, where Sen. Bill Seitz (R-Cincinnati) has been pushing a bill that originally sought to rescind standards established five years ago, including powering 25 percent of the state with renewables by 2025.

In addition to figuring out how to win back corporate sponsors following the controversial backing of Stand Your Ground gun laws, ALEC's December agenda includes further discussion on its resolution, which could possibly kill net metering and/or impose a fee on solar users like Arizona did last month.

As both a report from The Guardian and a blog post from Greenpeace researcher Connor Gibson write, part of ALEC's discussion included Energy, Environment and Agriculture task force leader John Eick labeling some solar users "freeriders." Here's more from Gibson:

The Guardian opens with a bit on ALEC’s work for its utility member companies to make it prohibitively costly for homeowners to put solar panels on their rooftops and feed extra electricity then generate back into the grid—a process spurred by “net metering” laws, which exist in most states. ALEC’s new resolution could be used to lower or outright kill those net metering payments, or to add fixed charges to solar customers.

John Eick, who is temporarily running ALEC’s Energy, Environment and Agriculture task force now that Todd Wynn jumped ship for Edison Electric Institute, accuses homeowners that feed solar energy back into the grid of being “freeriders,” despite making their own capital investments in rooftop solar and producing a surplus of electricity that then supplies the entire grid:

Eick dismissed the suggestion that individuals who buy and install home-based solar panels had made such investments. “How are they going to get that electricity from their solar panel to somebody else’s house?” he said. “They should be paying to distribute the surplus electricity.”

In November, Arizona became the first state to charge customers for installing solar panels. The fee, which works out to about $5 a month for the average homeowner, was far lower than that sought by the main electricity company, which was seeking to add up to $100 a month to customers’ bills.

ALEC’s utility members fear the revolution that is distributed solar generation. The effort to make rooftop solar energy more costly in Arizona has been led by ALEC member utility Arizona Public Service, which lied to the public in attempts to hide its funding of groups affiliated with the Koch brothers that have run ads against incentives for rooftop solar production. APS recently rejoined ALEC after a short year where it had distanced itself.

Ultimately, ALEC’s battle against clean energy, and the jobs that come with it, fits into their decades-long role in the climate change denial movement. ALEC has consistently fought to deny the science of climate change, force teachers to misrepresent climate science to their students, and churned out copycat state bills to block regulations of greenhouse gases.

[Check out this leaked 1998 memo from an American Petroleum Institute meeting that identified ALEC and other industry front groups to coordinate against the Kyoto Protocol and U.S. legislation to prevent runaway global warming.]