ALEC in Denial of Its Climate Denial, Threatens to Sue 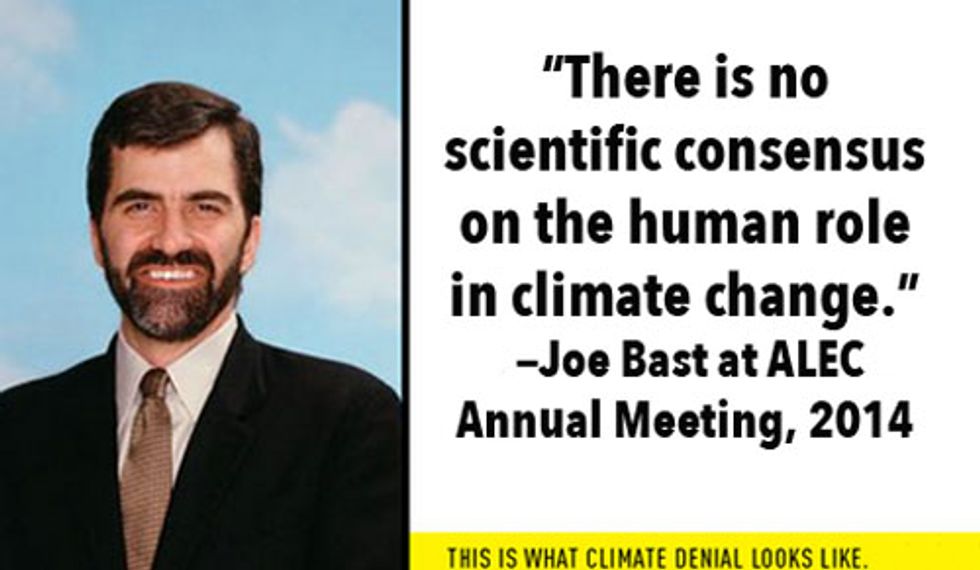 Conservative lobbying group the American Legislative Exchange Council (ALEC) writes pro-fossil fuel, climate-damaging "model legislation" for its members in Congress and state legislatures across the country to pass. It's financed by a roster of corporations that benefit from such legislation and ALEC, in turn, funds campaigns to push the legislation into law.

It's been behind such bills as Ohio's freeze of its clean energy standards last year and the repeal of West Virginia's standards in February, and it's promoting similar legislation around the country. It's been fighting against the growth of solar power across the country working to block rooftop installations that might undercut big utility companies. In Florida, where a battle over making such installations legal is going on right now, former state legislator Jimmy Patronis, now sitting on the Florida Public Service Commission, has been listed as ALEC's state chair.

But the efforts of nonprofit advocacy groups like Common Cause, the League of Conservation Voters (LCV) and Greenpeace have cost it a growing list of high-profile corporate members. Over 100 have departed, as public pressure has mounted. Just in the past year, ALEC lost Facebook, Microsoft, AOL, eBay, Google and Yelp. Pepsi, Coca-Cola, McDonald's, Procter & Gamble, Amazon, Best Buy and WalMart were already gone. Even BP, formerly a high-level ALEC sponsor, announced in March it was cutting its ties with the group. Greenpeace, for its part, has announced the launch of a new website to highlight the extent of ALEC's climate denial campaign.

With so much attrition, ALEC has decided to fight back, and the tactic it's chosen is intimidation. It sent cease-and-desist letters to Common Cause and the League of Conservation Voters, threatening to sue them unless they retract statements saying ALEC is denying climate change.

The letter said it was "clear" that ALEC did not deny that climate change was happening and was human-caused. It claims that ALEC adopted the "model policy" that "human activity has and will continue to alter that atmosphere of the planet" in 1998.

The letter also does some fancy footwork to claim that Google chairman Eric Schmidt's comment last fall, in response to a question from an NRP listener about whether Google was still funding ALEC, wasn't referring to ALEC at all. Addressing specifically Google's departure from ALEC, Schmidt said, "Everyone understands climate change is occurring, and the people who oppose it are really hurting our children and our grandchildren and making the world a much worse place. And so we should not be aligned with such people—they’re just literally lying.”

"If you listen to the  entire exchange on the Diane Rehm show, Mr. Schmidt does not say ALEC is lying about the facts of climate change," sad ALEC's attorneys, apparently preferring the narrative that Schmidt was referring to "people" in general.

ALEC claims they don't deny the science, but its members have made many public statements doing just that. Photo credit: Greenpeace

"We demand that you cease making inaccurate statements regarding ALEC, and immediately remove all false or misleading material from the Common Cause and related websites within five business days," said the letter from ALEC's law firm. "Should you not do so, and/or continue to publish any defamatory statements, we will consider any and all necessary legal action to protect ALEC."

It also demanded that a retraction of the statements be prominently displayed on Common Cause's website.

“ALEC’s demands and legal threats are an effort to shut down debate about its policies and matters of national importance," said Common Cause president Miles Rapoport. "They seek to chill our right to advocate for the public interest. It won’t work.”

So far it hasn't. Common Cause's lawyers responded to ALEC on March 25, three weeks after it received ALEC's letter. As of now, no lawsuit has been filed.

“We don’t appreciate the attempt to silence LCV just because we disagree with ALEC’s positions,” LCV's senior vice president for communications David Willett told the Washington Post. “Usually if someone wants to get serious about tackling climate change, they ask about working with us, they don’t threaten to sue us.”

The Washington Post pointed out that the increasing amount of negative publicity ALEC has gotten as it's emerged in the past several years from the shadows where it preferred to reside seemed to have had an impact on the group.

"The legal spat is an escalation of the conflict and suggests ALEC is feeling the heat of the activist groups’ efforts," it said. "It also suggests a new risk to organizations that rely on the donations from companies that do not want to be associated with organizations accused of denying that human activity is warming the atmosphere at an alarming rate."

Common Dreams
Food
Sprinklers irrigate a field of onions near a Castilian village in Spain. According to a new study, the average farm size in the EU has almost doubled since the 1960s. miguelangelortega / Moment / Getty Images

A new report released Tuesday details the "shocking" state of global land equality, saying the problem is worse than thought, rising, and "cannot be ignored."