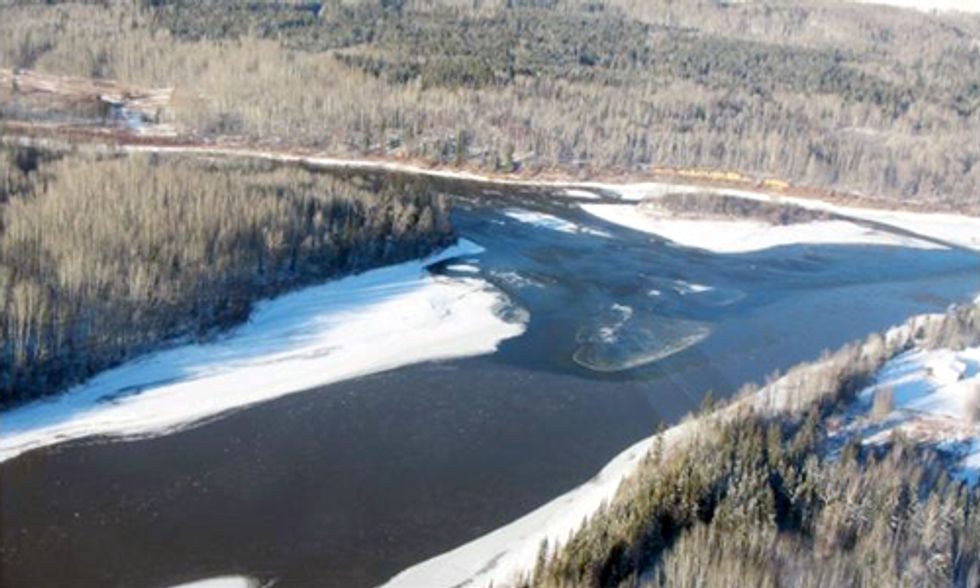 Thank goodness for Dr. James Talbot, Alberta’s chief medical officer of health. After 14 days of stonewalling by the Alberta Government, he released some of the water test results from the gigantic 1 billion litre coal slurry spill into the Athabasca River from the Obed Mountain coal mine near Hinton, Alberta. Paula Simons of the Edmonton Journal started her incredible breaking news story on Nov. 14 with the following:

“Mercury levels nine times higher than normal. Levels of cancer-causing polycyclic aromatic hydrocarbons four times the allowed standard for Canadian drinking water. Those are the kinds of disturbing test results Dr. James Talbot, Alberta's chief medical officer of health, is seeing as he monitors a huge plume of coal mine waste water currently oozing down the Athabasca River. Our overriding concern is the safety of the drinking water, says Talbot. We're advising people, 'Don't draw water as the plume is going by.'"

The information provided by Dr. Talbot stands in stark contrast to previous statements by the Alberta Government and Sherritt International, who owns the mine. The headlines in statements issued by the Alberta Government on Nov. 2 and Nov. 4 called Canada’s largest coal slurry spill a “sediment release.” The Nov. 4 statement went on to say, “Sediment was released from an onsite water storage pond. The pond contains high levels of suspended solids, which include such things as clay, mud, shale and coal particles.” Neither release mentioned the presence of toxic mercury or cancer-causing polycyclic aromatic hydrocarbons. In fact, the Nov. 4 statement went out of its way to mention that “…water sample tests do not indicate any health risks.”

How long did Alberta Environment think they would get away with their failure to disclose critical information about toxics? Especially when you consider that the Canadian National Pollutant Release Inventory (NPRI) contains public records that list tons of toxic waste dumped at the Obed Mine site. Mining Watch Canada reports that alarming amounts of arsenic, cadmium, lead, manganese, mercury, zinc and PAH were reportedly dumped into Obed Mine’s containment ponds and provided this table of NPRI reported information:

When provided with the table of these pollutants, Dr. Greg Goss, an environmental toxicology professor and researcher at the University of Alberta, said:

“The coal slurry spill will be devastating to streams in the area for a long time. I am outraged that we have heard nothing from the federal Department of Fisheries and Oceans (DFO). They are responsible for enforcing the Fisheries Act. Despite the recently stripped down Fisheries Act, this is a clear situation where the act still applies and we should expect a response from the DFO. There are cut-throat trout and native bull trout in the streams that were impacted by the spill. These are species that fall under the new recreational, commercial and aboriginal interest designation of the Fisheries Act.”

Jule Asterisk, a director of the Keepers of the Athabasca, said:

"It is unbelievable in this day and age, with the known pressures of growth requiring constant vigilance and monitoring, that a containment pond was allowed to fail so dramatically. The Obed coal mine was 'suspended' just last year for remediation. In any closure/suspension/remediation plan, there is an inspection schedule for the facility. Where were the inspectors? Both Sherritt International and Alberta Environment and Sustainable Resource Development have failed their due diligence in this case. The pond had a complete failure. One billion litres was allowed to blast 25 kilometres through trout streams to the Athabasca River before anyone noticed? Now, after being told the release was non-toxic, we are finding out differently. The government of Alberta and that of Canada now has another black eye in international opinion. Have we become a developing country that has no control of our environmental protection? Environmental care is not just about shutting down facilities, environmental care is about keeping people and our environment safe, one of the main reasons governments exist. From now on, we must have careful monitoring and full disclosure of industrial hazards.”

"We are not surprised to learn of the toxic nature of coal tailings spills," says environmental lawyer and Lake Ontario Waterkeeper Mark Mattson. "The lack of reporting outlines our disappointment with how government and industry handled this major spill. We now expect the full force of the law will be brought to bear on the polluter to ensure our waters and communities are protected."

Picture of a 100 km long leak of coal mine sludge, making its way down the Athabasca River. This photo taken on Nov. 11 or 12, near the confluence of the Lesser Slave River. One billion litres of sludge leaked from the closed Obed Mountain Mine near Hinton on Oct. 31.
Photo credit: Alberta Environment

"Albertans have entrusted our government to protect our waters and public health. This needs to happen with actions not words," says Glenn Isaac, North Saskatchewan Riverkeeper.

The Keepers of the Athabasca, Waterkeepers Canada and Waterkeeper Alliance are renewing our request to Alberta Environment to release all the water test results related to the Obed Mountain coal slurry spill. The Alberta government is 12 days overdue on its Nov. 2 promise to release these test results to the public. If you think it is high time for all the water test results to be released, you can make your own appeal by contacting Jessica Potter with Alberta Environment and Sustainable Resource Development at [email protected] or 780-427-8636 and toll free within Alberta at 310-0000.