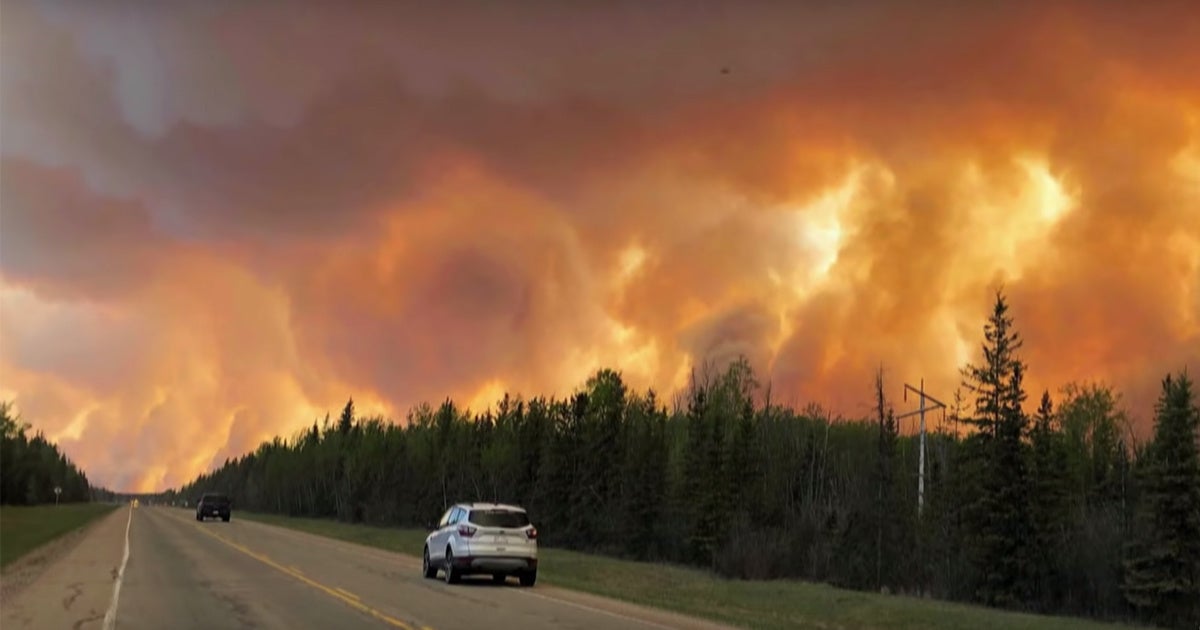 Thousands of Albertans have evacuated their homes due to out-of-control wildfires. CBC News / YouTube screenshot

More than 10,000 people have been forced to evacuate as wildfires spread in northern Alberta, Canada’s CBC News reported Thursday. Smoke from the fires has choked skies across the province, raising the Air Quality Health Index in its capital city of Edmonton to a 10+ Thursday, the Edmonton Journal reported.

In an ironic turn, the fires prompted Alberta Premier Jason Kenney to cancel a celebration of the repeal of the province’s carbon tax, Canada’s National Observer reported.

*This event has been cancelled so the premier can receive an internal, real-time briefing on the status of Alberta’s wildfires,” the government said in a statement reported by Canada’s National Observer.

Kenney had promised to repeal the carbon tax and roll back other climate change policies in the April 16 general election. A bill to repeal the tax was the first his government introduced after gaining power. While the bill has not yet passed, fuel sellers were expected to stop collecting the tax at 12:01 a.m. Thursday, the Edmonton Journal reported.

“Just hours later, the skies of Edmonton darkened with smoke from wildfires in the north of the province,” the paper wrote.

Canada’s Environment Minister Catherine McKenna criticized the repeal and said she was working on a national tax.

“We know we’re feeling the impacts of climate change. In Alberta, you have forest fires this year that have started earlier than before, major concerns about the impacts of these fires this year,” McKenna said, as the Edmonton Journal reported. “We’re going to work as quickly as possible to make sure it’s no longer free to pollute.”

The tax had charged Albertans an additional 6.73 cents per liter for gasoline and .51 per gigajoule of natural gas.

The current fires had forced around 5,000 to evacuate more than a week ago, according to Canada’s National Observer. They continued to spread this week, as smoke forced even more people to flee their homes Thursday.

“We began the day yesterday with approximately 5,500 evacuees and we currently have over 10,000,” Agriculture and Forestry Minister Devin Dreeshen said, as CBC News reported Thursday.

“The roads are melted,” Blake Desjarlais, director of public and national affairs for the Métis Settlements General Council, told the Edmonton Journal.

Desjarlais was frustrated by the lack of support his community was receiving from the Alberta government, Global News reported. He said they were not fighting the fire on the western side, which would most protect the evacuated community, and also that they were not doing enough to help evacuees.

Desjarlais also said the fire could have a long-term economic impact on the community.

“We’ve lost trap lines, they’re a strong economic driver for us,” he said, as Global News reported. “Most of the regional farmers have had to cut animals loose.”

The impact of the fires hasn’t been limited to Alberta. Smoke from the fires has contributed to cloudy skies in western Ontario, southwestern B.C. and the U.S. Midwest, Global News reported Thursday.