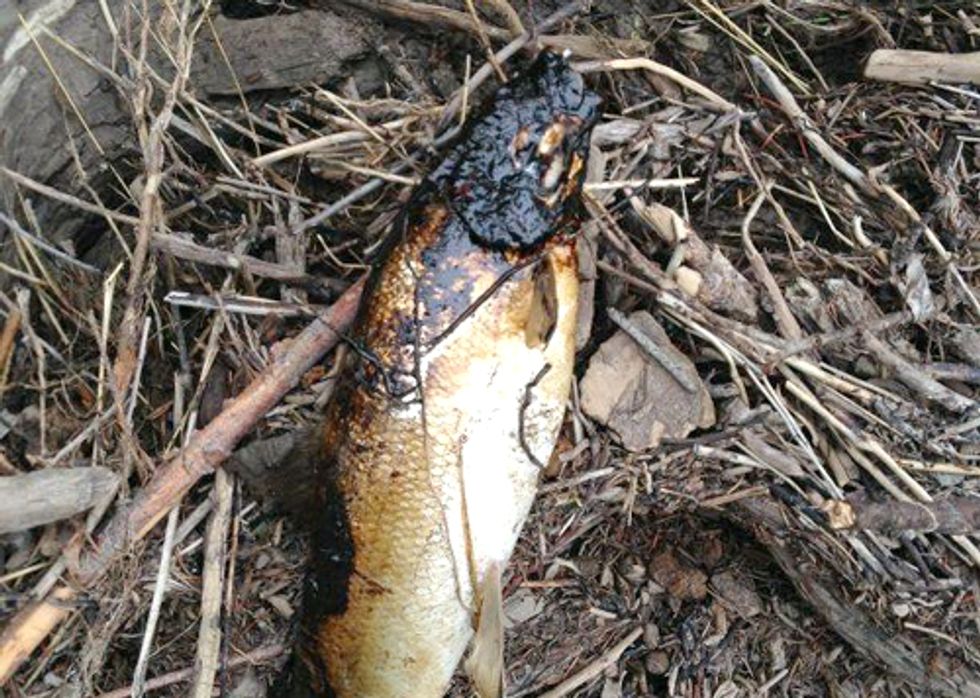 The Canadian oil industry (the same fine folks trying to ram Keystone XL down our throats) is having a bad summer, but it’s nothing compared to the stress felt by communities and wildlife in their path. Recently I told you about a major oil spill in Alberta that leaked almost a million gallons. Now we’re hearing about another pipeline rupture in the province, this one sending 126,000 gallons of crude oil into the Red Deer River and Gleniffer Lake, a reservoir that provides drinking water for more than 100,000 citizens. Plains Midstream Canada, the company that owns the line, has expressed the usual shock and regret, but the accident has put Alberta on alert:

The province issued an emergency alert for Mountain View and Red Deer counties, warning people not to touch, drink, swim or boat on the waterways affected by the spill.

“I was going to go fishing but [Alberta Environment officials] said, ‘no, you’re not allowed, “‘ Andrew Van Oosten, who huddled with his friends underneath a tarp at his campsite near the Gleniffer Reservoir, told CBC News. “You are not allowed to go near the water because it [oil] is washing up on shore.”

Is It an “Accident” When It Keeps Happening?

Nobody thinks the oil industry is going out of its way to sabotage their own pipelines, or is sitting around in back rooms scheming up ways to spill crude oil all over wildlife and fragile ecosystems. But there’s a point when accidents start getting so routine that they stop being “accidents” and become something else entirely. And in the two years since the Deepwater Horizon catastrophe put oil spills onto the front page and turned the Gulf of Mexico into a toxic dump, Big Oil has been responsible for hundreds more “accidents” and millions of gallons of spills.

Think about that for a second. Millions of gallons of crude oil that has no reason to be outside of a pipeline, but there it is, turning up in our drinking water, on our shorelines, polluting crops and fish and wildlife. The residents of Alberta have something in common with folks in Michigan along the Kalamazoo River. They share it with shrimpers on the Gulf coast, and with Denver residents, and North Dakotans, and with people around the globe who have to live with the consequences of Big Oil’s screwups. It’s not a fraternity I’m eager to join.

We deserve better. We deserve a system where a major oil spill is actually a surprise, and not just another day at the office. But our reality is this: half of the U.S. government is tripping over itself to help the oil industry build pipeline after dangerous pipeline—in the Midwest, in New England, in the Gulf region … everywhere there’s a buck to be made or a political point to score.

But you can make a difference. Add your voice to the hundreds of thousands of Americans speaking up for wildlife and clean energy. Say no to Keystone XL and other polluting projects, and maybe the community you protect will be your own.

Speak up for wolves and other animals threatened by Big Oil’s dirty plans. Take action now.