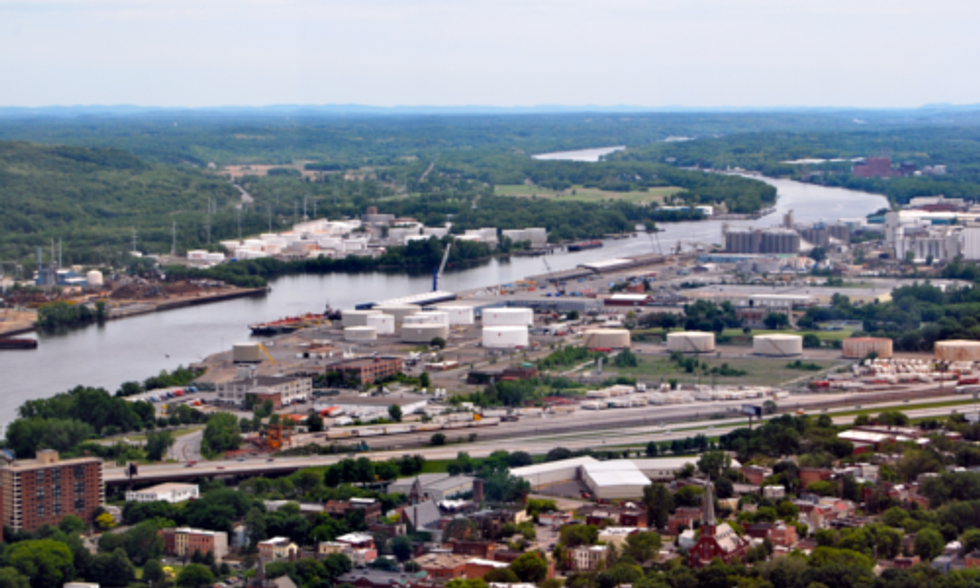 Albany County Executive Daniel McCoy issued an executive order today imposing a moratorium on the heating of crude oil and expansion of dangerous crude by rail transport operations at the Port of Albany, proposed by the Massachusetts-based Global Companies LLC.

The Port of Albany terminal sits on the banks of the Hudson River. Photo credit: Wikimedia Commons

Stating that the moratorium will not be lifted until he’s confident that Albany County residents are safe, McCoy also directed the County Department of Health and the sheriff’s office to conduct full health and safety reviews of the proposal.

Today’s news follows pressure by a broad coalition—including local elected officials, community groups, tenants associations and environmental groups—on the state Department of Environmental Conservation (DEC) for its dangerously lax approach to skyrocketing shipments of crude by rail into the Port of Albany.

“In the face of the significant environmental and public health threats from Global’s operations, Albany County Executive Daniel McCoy has shown bold leadership in acting to protect the public, while Gov. Cuomo’s DEC has stood on the sidelines," said Christopher Amato, an Earthjustice attorney.

In 2012, Global received state environmental permits allowing it to double crude oil storage and loading capabilities at its Port of Albany terminal, where the company annually offloads more than 1 billion gallons of highly explosive Bakken crude oil from rail cars into storage tanks and then transfers the oil to ships and barges on the Hudson River.

To access the facility—which adjoins low-income communities and a playground and is within blocks of an elementary school, a senior facility and a center for the disabled—trains carrying the explosive crude in tankers travel a rail line that passes directly through the heart of the City of Albany. DEC allowed Global’s massive 2012 expansion to proceed without requiring a full environmental impact review and without complying with its own Environmental Justice policy which requires community participation and input on such proposals.

“We are gratified that Albany County officials have taken the lead on this vital issue," Amato continued. “We urge Gov. Cuomo’s DEC to also demonstrate leadership and respond to community concerns by requiring that a comprehensive environmental impact statement be prepared for Globals’ massive crude oil operation.”

Global recently applied to DEC and the Albany City Planning Board for permits to allow it to again expand operations and allow the company to start heating tar sands oil, a heavy viscous oil containing numerous toxic contaminants.

Local residents are concerned about increased air pollution from the crude oil operations—already an issue for many residents who experience adverse health effects from odors emanating from the Port—as well as the risk of fire and explosion from the ongoing rail shipments. Ignoring these very real environmental and health impacts, DEC again failed to require a full environmental impact analysis of Global’s proposed expansion.