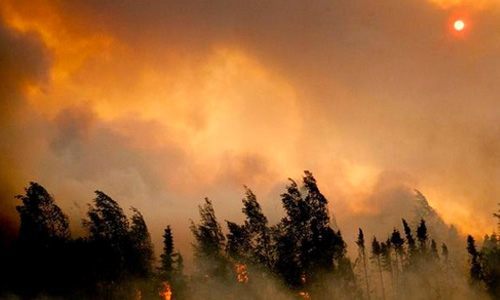 Climate change has caused Alaska’s glaciers to melt so quickly that a one-foot thick layer of water could completely cover the entire state of Alaska every seven years, according to a new study.

You can see how much ice has melted into the oceans in just three decades with NASA’s satellite imagery of Alaska’s fast-moving tidewater Columbia Glacier from 1984-2014.

Alaskan glaciers have lost 75 billion metric tons of ice every year from 1994 through 2013, The Washington Post′s Chris Mooney reported from the study, which was recently accepted for publication in the peer-reviewed Geophysical Research Letters, a journal of the American Geophysical Union. Mooney also reported that the Columbia Glacier (see GIF above) alone has been sending 4 billion metric tons of water into the oceans every year.

Alaska’s melting glaciers are “punching far above their weight” when it comes to contributing to sea level rise, CBS News‘s Michael Casey pointed out, referring to how Alaska only holds one percent of the Earth’s glacial ice volume, with most of the Earth’s ice found in Antarctica and Greenland’s ice sheets.

But as the authors of the new study explained, “Despite Greenland’s ice covered area being 20 times greater than that of Alaska, losses in Alaska were fully one third of the total loss from the ice sheet during 2005-2010.”

For the study, a University of Alaska Fairbanks and U.S. Geological Survey research team analyzed surveys of 116 glaciers in the Alaska region across 19 years to estimate ice loss from melting and iceberg calving, according to a news release.

“Thinking about the future, it means that rates of loss from Alaska are unlikely to decline, since surface melt is the predominant driver, and summer temperatures are expected to continue to increase,” said Chris Larsen, a research associate professor with the Geophysical Institute at the University of Alaska Fairbanks and lead author of the study.

“There is a lot of momentum in the system, and Alaska will continue to be a major driver of global sea level change in upcoming decades,” he added.

Not only are Alaska’s glaciers melting, the northernmost U.S. state experienced record heat at the end of May where parts of Alaska recorded temperatures higher than in Arizona.