Alaskans Ask Jeweler to Reject Dirty Gold from Pebble Mine 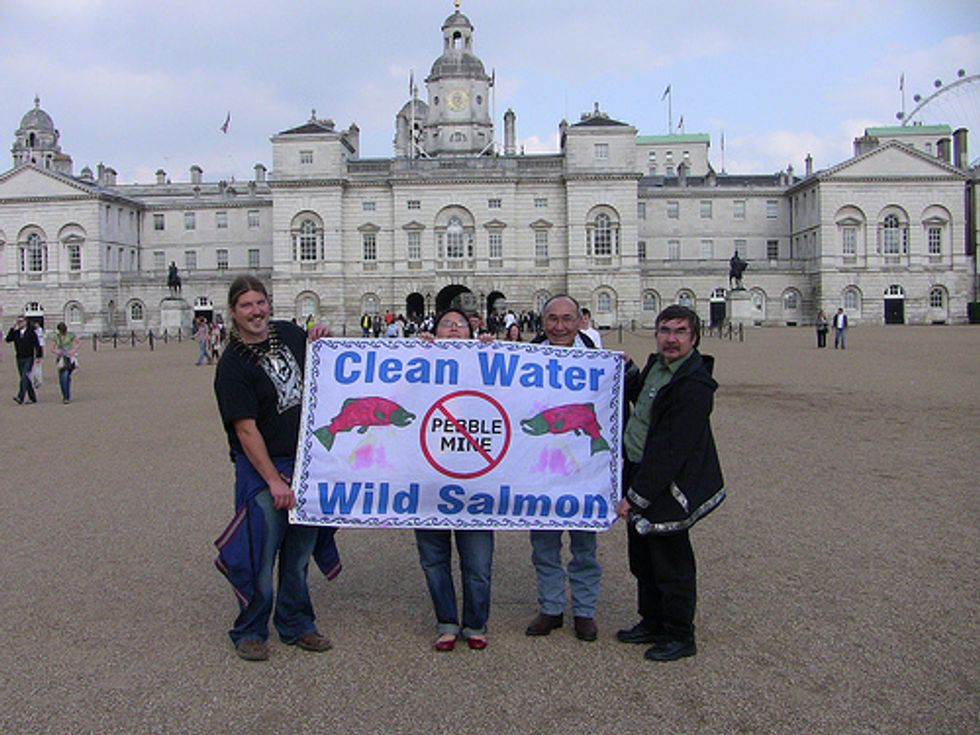 In the weeks leading up to Black Friday, the biggest shopping day of the year, Alaskans are asking Signet, the world’s largest jewelry corporation, to promise not to use gold from the proposed Pebble Mine—a massive copper gold mine that threatens the world’s most valuable wild salmon fishery.

Alaska Natives, commercial fishermen and mining reform group Earthworks have turned the spotlight on the world’s largest jeweler—Signet, parent company of the retail chains Kay Jewelers and Jared the Galleria, with a full-page ad in the Western edition of The New York Times.

The groups want Signet Jewelers (NYSE:SIG)(LSE:SIG) to sign the Bristol Bay Protection Pledge. More than 50 leading jewelers worldwide, representing over $5.5 billion in sales and including Tiffany & Co., Zales and Boucheron, have gone on record that they will not use gold from the Pebble Mine, proposed by Anglo American plc (LSE:AAL)(JSE:ANGLO) in partnership with Canadian miner Northern Dynasty.

The vast open-pit mine would sit at the headwaters of Bristol Bay, the most valuable wild salmon fishery in the world and the basis of the region’s economy and culture. Up to 10 billion tons of toxic mine waste would be dumped in the Bristol Bay watershed, endangering both the salmon and a way of life. A 2010 ecological risk assessment concluded that large-scale mining in Bristol Bay is cause for “significant concern regarding the long- term abundance and sustainability of salmon in the region.”

“Bristol Bay feeds our families and millions the world over,” said Kim Williams, executive director of Nunamta Aululestai ("Caretakers of the Land” in Yu’pik.) “We’re asking Kay and Jared Jewelers to support Bristol Bay protection because gold jewelry should be a symbol of love, not destruction.”

“Alaska’s Bristol Bay supplies half the world’s wild sockeye salmon, and it sustains thousands of hardworking fishermen,” said Bob Waldrop of the Bristol Bay Regional Seafood Development Association, representing roughly 2,000 Bristol Bay commercial fishermen. “We’re very grateful for the support we’ve gotten from jewelers all over the world, and we’re asking Signet to support us, too,” he continued. “It’s the responsible thing to do and it shows their customers that they are serious about ethical gold sourcing.”

Since 2009, the groups have attempted on numerous occasions to engage with Signet through letters and phone calls and have invited Signet to meet with native Alaskan leaders, technical experts and others regarding the project.

The jewelry retail sector is an important voice on the issue because jewelry accounts for roughly 80 percent of newly mined gold globally, according to the World Gold Council. The proposed Pebble Mine is the largest gold porphyry deposit in the world, according to the mining company.

“This is an opportunity for Kay and Jared Jewelers to shine. There’s no better way to demonstrate that it supports responsible gold sourcing principles than for the world’s largest jeweler to promise that it won’t buy gold from a mine that would jeopardize the world’s greatest fishery,” said Bonnie Gestring of Earthworks.

The ad was signed by Nunamta Aulukestai, the association of nine Native villages in the area, the Alaska Independent Fishermen’s Association, the Bristol Bay Regional Seafood Development Association, and the mining reform group Earthworks.

To see a copy of the New York Times ad, click here.