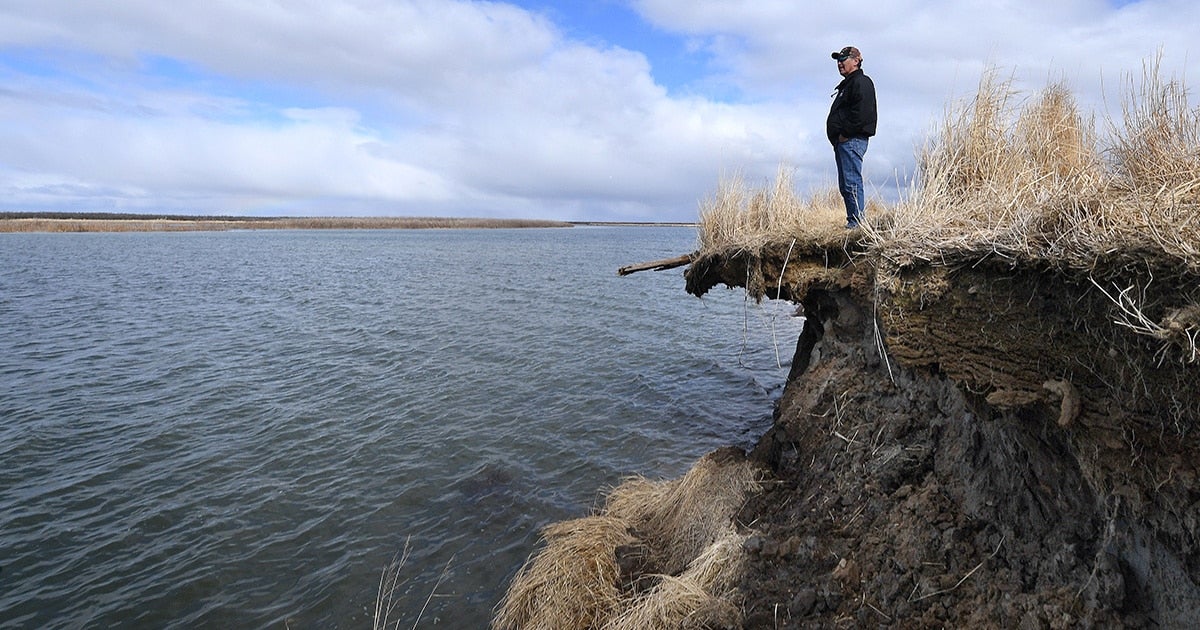 Tribal elder Warren Jones stands on the edge of climate change erosion caused by melting permafrost tundra and the disappearance of sea ice which formed a protective barrier, as it threatens houses from the Yupik Eskimo village of Quinhagak on the Yukon Delta in Alaska on April 12, 2019. MARK RALSTON / AFP / Getty Images

The ice near Alaska‘s shores has melted away entirely, leaving the nearest ice shelf nearly 150 miles away, according to new satellite data from the National Weather Service, as The Independent reported.

The historic Alaskan summer that saw record high temperatures, warmer seas, and a once in a lifetime heat wave, has caused the sea ice to vanish.

The phenomenon does not mean that the ice won’t return. It should return in the fall as the Arctic moves away from the sun and the temperatures start to drop again. Alaska has seen a complete ice melt before, as recently as two years ago, but it has never vanished this early.

“It’s cleared earlier than it has in any other year,” said Rick Thoman, a climate specialist at the Alaska Center for Climate Assessment and Policy, as Mashable reported.

The melting is not just confined to Alaska. The Arctic ice around Greenland and Siberia has also seen record melting due to various heat waves, record temperatures between May and July and a rash of wildfires burning near the Arctic. This is all commensurate with the global climate crisis.

“This fits in exactly with our expectations of long-term climate change,” said Zack Labe, a climate scientist and Ph.D. candidate at the University of California Irvine, to Vice’s Motherboard.

Alaska’s northernmost city, Utqiaġvik, which sits above the Arctic, had a record setting 25 straight days of temperatures above 40 degrees Fahrenheit.

“July was by far the warmest month of record at Utqiaġvik,” tweeted Thoman. “Of the 20th warmest months, six have been just since 2010.”

He also noted that the Bering Sea set record warm temperatures, which is part of a troubling pattern of warming seas.

“Early summer (May-July) average sea surface temperatures in the northern Bering Sea were the highest of record in the @NOAANCEIclimate ERSSTv5 data,” Thoman tweeted. “Each of the past six years is among the warmest of record.”

The warming seas caused a record early melt, which has a devastating effect on local economies and residents who depend on the sea ice for hunting and fishing to sustain them through the long winter, as EcoWatch reported.

September sea ice has averaged a 13 percent decline each decade over the last 40 years since satellite records began, but this decade’s melt will certainly push that average up. The rapid and severe changes around Alaska and the Arctic as a whole have scientists alarmed.

“This is a decline of around 85,000 square km per year – equivalent to losing an area of sea ice each year greater than the size of Scotland,” said Ed Blockley, an expert on Arctic sea ice at the UK’s Met Office, as The Independent reported.

“I’m losing the ability to communicate the magnitude [of change],” said Jeremy Mathis, a longtime Arctic researcher and current board director at the National Academies of Sciences, to Mashable. “I’m running out of adjectives to describe the scope of change we’re seeing.”

As this lack of sea ice becomes the new normal, local economies will have to adapt and experts suggest people along the Alaskan coast start moving to higher ground to escape flooding.

“At this time of year ‘normally’ (ie 30 years ago) there would be sea ice in southern Alaska waters but, more importantly, sea ice across the north coast of Alaska leaving only a narrow slot between ice and land for ships attempting a northwest passage,” said professor Peter Wadhams from the University of Cambridge, to The Independent. “The latest shrinkage is part of an Arctic-wide phenomenon which is leading towards an ice-free summer as the future norm.”