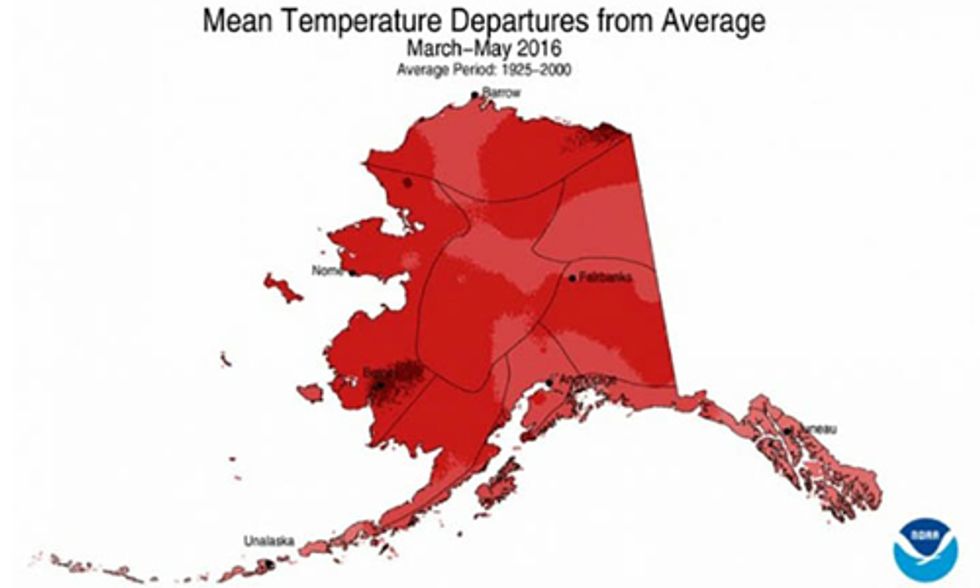 Like the rest of the world, Alaska has been unusually hot this year—and it's about to get hotter.

That's according to the most recent data released by the National Oceanic and Atmospheric Administration (NOAA), as Climate Central reported.

Between March and May of this year, the meteorological spring, the entire state has been about 10 degrees hotter than normal, with an average temperature of 32 F.

"That may sound cold," Climate Central noted, "but warmth is a relative term. That temperature handily beat the previous record hot spring of 1998 by 2 F (1 C), according to NOAA."

The cities of Anchorage, Fairbanks and Juneau have experienced their hottest springs since records began.

How much spring temperatures departed from the average in Alaska this spring. Photo credit: NOAA / Climate Central

Frightening effects of a warming Alaska include melting permafrost, increasing wildfires, an acidifying ocean and depletion of habitat for critical species, scientists have warned.

"Alaska isn't only experiencing the hottest temperatures on record by a huge margin,"observed Gizmodo: "The state's frozen rivers broke up earlier than ever before. The growing season shifted earlier than ever in recorded history. The state is also drying up quick, with only the very lowest coastal regions not in active drought right now."

Rick Thoman, climate science and services manager for the NWS's Alaska region, said that several factors had converged to keep Alaska so relatively toasty, including persistent high pressure systems over the region and warm waters off the coast. Early snowmelt has also exacerbated the spring heat.

The effects of the elevated temperatures are readily apparent, Thoman said, with berries ripening weeks earlier than usual, very early “last frosts" and an early start to construction projects.

Climate Central observed that temperatures in Alaska "have also steadily risen—like the planet as a whole and the Arctic in particular—thanks to the excess heat trapped by human emissions of greenhouse gases."

Indeed, scientists say that 2016 may end up being the hottest year in recorded history and by the widest margin, as Common Dreams reported.