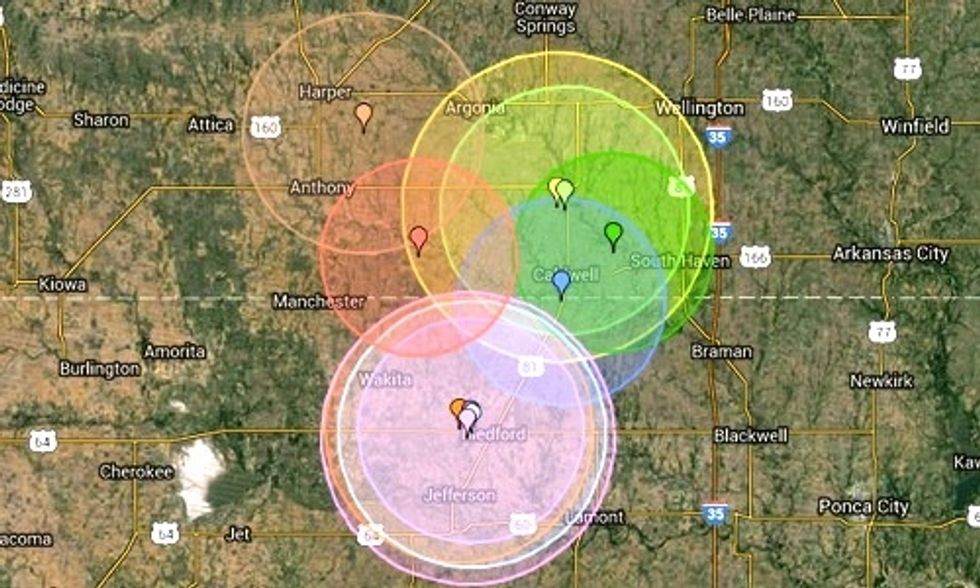 Just like in Oklahoma, Kansas is seeing a shocking uptick in earthquakes connected to the underground disposal of wastewater from the hydraulic fracturing, or fracking, process.

This map, which records recent seismic activity in Kansas, has lit up like a Christmas tree just this week alone.
Photo credit: Earthquaketrack.com

The Washington Post reports that Kansas has recorded more earthquakes in the past two weeks alone than there have been in the years between 1990 and 2013. According to the Kansas Geological Survey, between Oct. 15-26, there were 52 quakes, most with a magnitude between 2.0 or 3.0. That's a huge increase from the 19 earthquakes recorded in the state between 1990 and 2010.

In recent years, Kansas has seen an energy boom-and-bust due to technological advancements in fracking and horizontal drilling. However, this quest for oil and gas has produced mixed results, from harmful waste spills to an increase in seismic activity.

Earlier this year, the Kansas Corporation Commission, which regulates the state's oil and gas industry, decided to limit the underground injection disposal of saltwater from oil wells mainly in Harper and Sumner Counties. The decision reportedly tamped down on the number of earthquakes in the area, according The Wichita Eagle.

However, one can only wonder if the recent spate of tremors in the state has anything to do with the commission's regulations expiring Sept. 13.

Fracking involves shooting highly pressurized liquid into underground rock and shale formations to release trapped oil and gas. This large quantity of leftover liquid from the fracking process is then injected into underground wells. Multiple studies have said that this action has been triggering long dormant fault lines.

Kansas currently has 7,000 permitted waste wells, compared to the 2,000 it had 15 years ago, the Post observed.

Besides Kansas, other oil-and gas-rich states such as Oklahoma, Arkansas, Colorado, Ohio and Texas have all observed more earthquakes that are linked to wastewater injection activity, according to IBTimes.

"Activities that have induced felt earthquakes in some geologic environments have included impoundment of water behind dams, injection of fluid into the Earth's crust, extraction of fluid or gas, and removal of rock in mining or quarrying operations," the U.S. Geological Survey says.