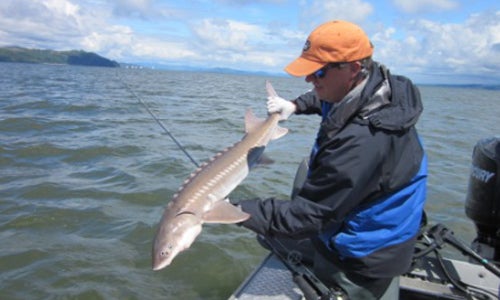 The mighty Columbia River rolls down from the Canadian rockies to form the border between Oregon and Washington State. Rolling along in its waters are the fish that have been the backbone of the region’s life for countless centuries. 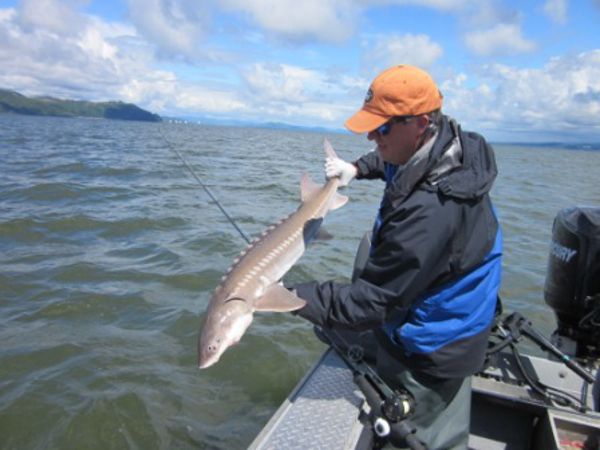 Fisherman Bob Rees with a sturgeon from the Lower Columbia River. That fish may not be safe to eat. Photo credit: Columbia Riverkeeper

These days the fish are carrying some things the Native tribes of the region didn’t have to worry about back then: high levels of cancer-causing PCBs, heavy metals like mercury and arsenic and toxic flame retardants, chemicals that can disrupt the endocrine and reproductive systems. That’s according to Columbia Riverkeeper, which recently announced phase 2 of its “Is Your Fish Toxic?” study, measuring toxic pollution in five different fish intended for  human consumption. Obviously the answer is “yes.”

“Fish advisories are not enough,” said Columbia Riverkeeper‘s water quality director Lorri Epstein. We need immediate reduction and prevention of toxic pollution entering our river to protect the health of our communities.”

Today, immigrant populations, especially low-income ones, have joined the tribal peoples in depending on the largesse of the river for their food. Columbia Riverkeeper’s interviews with these populations found that they are especially at risk from unsafe levels of toxic pollution because of their higher fisher consumption and the ways they prepare the fish. They found, for instance that Cambodian-Americans might put the whole fish, including internal organs skin, head and tail into a soup or stew, increasing the level of exposure to unhealthy chemicals. Some cultures use fish as the mainstay of their meals, receiving dose after dose of contaminants.

“The fact that some Columbia River fish are unsafe to feed your family presents a real environmental justice issue,” said Epstein. “Posting warning signs is not the answer. Many people are unaware of the warnings or will continue to eat fish due to cultural and economic reasons. The top priority must be cleaning up our rivers. Our data show extremely high levels of toxic contaminants in these fish, and we need to consider the individual stories and families interwoven with the results of this scientific data.”

Hip Hop Icon Macklemore Joins ‘A River for All’ Campaign