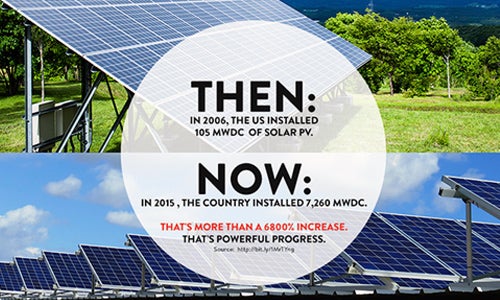 If you saw An Inconvenient Truth featuring former Vice President Al Gore back in 2006, chances are you left the theater a little stunned and asking a whole lot of questions. Questions like, “What can we do?” “What can I do?”

If so, you weren’t the only one. Fortunately. 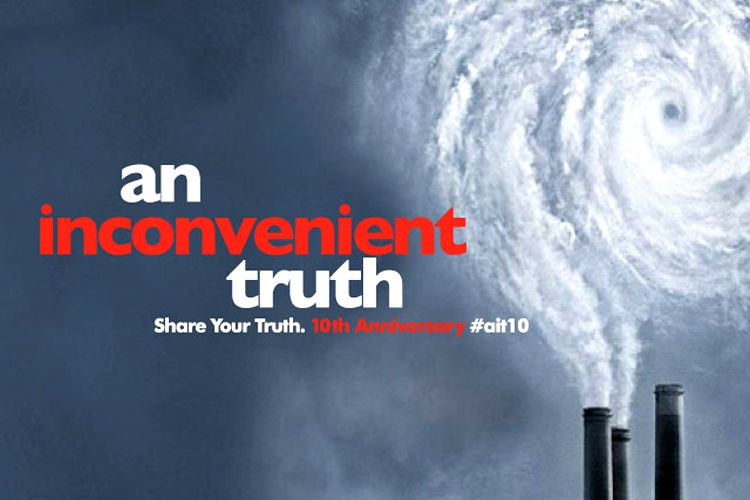 This month marks the 10th anniversary of the groundbreaking film that prompted millions to start asking questions about climate change and doing something about it, helping shape the modern climate movement we know today. And in the decade since, a lot has changed as a result.

Climate science has made major advances, helping us better understand the challenge we face. Renewable energy, such as solar and wind, is cheaper than fossil fuel-based electricity in many parts of the world. Electric cars are even becoming mainstream (well, for some).

But as much progress as we’ve seen over the past decade, there’s still a lot of work to do to build the sustainable future our planet needs. Let’s take a look at what’s changed—for better or for worse—in the fight against climate change over the past 10 years.

One of the biggest success stories in climate solutions is the growth of solar power. In 2015, the U.S. installed 7,260 megawatts direct current (MWdc) of photovoltaic solar which was the largest annual total in history and a giant leap from the 105 MWdc installed in 2006. That’s more than a 6,800 percent increase.

It gets better. Solar reached a new record in early 2016 when the one-millionth solar installation came online in the U.S. And according to a report by GTM Research, the U.S. solar market is projected to to grow 119 percent in 2016 alone—adding more than double the amount of capacity installed last year. We could go on (and on) about the rapid growth and benefits of solar energy, but you get the idea: solar is here to stay.

Carbon emissions account for between 65-76 percent of the greenhouse gases from human activity, causing the Earth’s temperature to rise at its fastest rate in millions of years. While natural variance in the Earth’s carbon cycle leads to some fluctuations in atmospheric carbon dioxide (CO2) levels, overall, we can see a clear connection between fossil fuels and these levels, which have increased about 40 percent since pre-industrial times. But what’s scary is that in the last 10 years alone, CO2 levels have increased 5.5 percent, jumping from 382 parts-per-million (PPM) in July 2006 to 404 PPM in April 2016. Which means more heat trapped in our atmosphere. 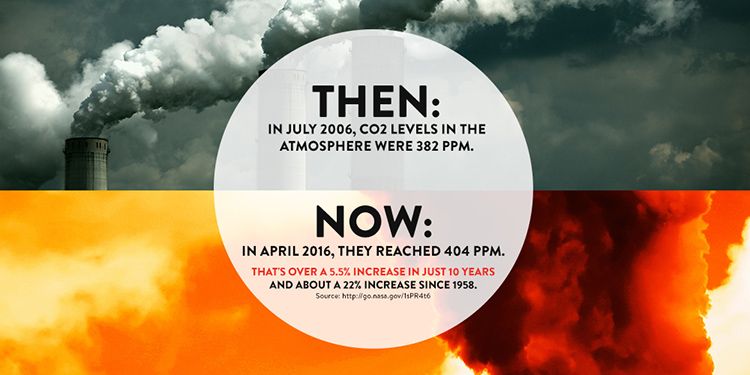 Electric Cars have Taken the World by Storm

You might have started spotting electric cars on the road more and more in recent years as both major manufacturers like Chevrolet and Nissan and boutique firms like Tesla Motors have seen their real market potential. But while electric cars have gained exceptional notoriety in the past decade, they’re actually a novelty of the past.

British engineer, Thomas Parker, invented the first electric car in 1884, which used rechargeable batteries. Gasoline-powered cars hadn’t gained much traction yet, but by the 1930s, engine improvements and the invention of the electric starter made gasoline-fueled cars a better, cheaper option. You know what happens after that.

Fast forward to 2003 when Tesla Motors launched, a company that set out to prove electric cars could be a more efficient and environmentally-friendly option than gasoline-powered cars. Tesla’s first electric car, the Tesla Roadster, launched to the public in 2008 and dramatically shifted how consumers views these vehicles. Since then, more and more manufacturers from BMW to Kia to Mercedes Benz have launched their own electric vehicles, taking the technology mainstream and reaching 1 million sales globally in September 2015. 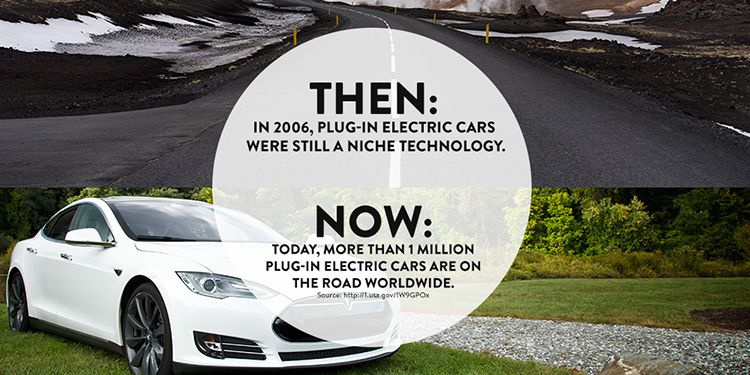 It’s no secret that 14 of the 15 hottest years ever recorded have occurred since 2001. Last year was the hottest year on record and 2016 is on pace to be even warmer.

These record-breaking temperatures become crystal clear when they’re displayed visually. The chart below shows how global surface temperatures have varied from the long-term averages since 1880. Look at the trend beginning around 1950 and you’ll see temperature changes steadily increasing throughout the second half of the twentieth century. And within the past decade alone, global temperatures have deviated from the long-term average by 0.63 degrees Celsius (33.14 degrees Fahrenheit) in 2006 to 0.87 degrees Celsius (33.57 degrees Fahrenheit) in 2015.  All of this to say our planet is warming like never before in recent history—and it’s only getting hotter. 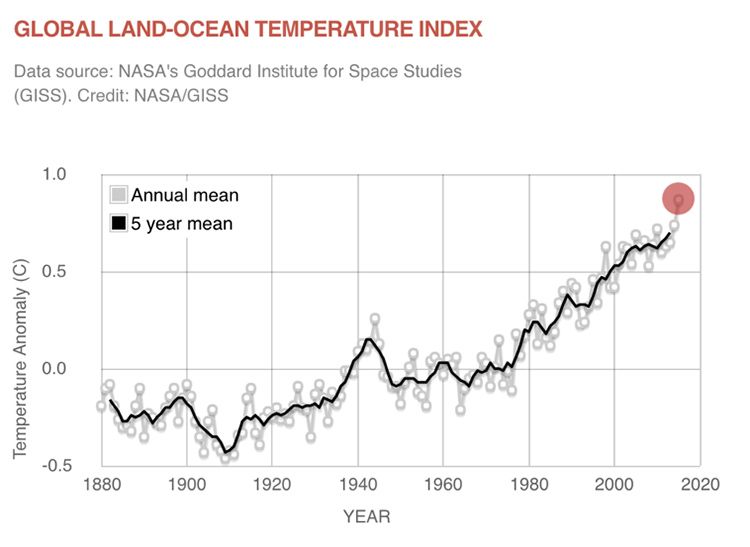 Sea levels have been rising for the past century—and the pace has only increased in the past decade as glaciers melt faster and water temperatures increase, causing oceans to expand. The chart below shows sea-level changes from 1993–2006 where, from June 2006 to January 2016, sea levels increased about 41.24 millimeters (1.62 inches).

You can imagine how this change would affect the half of the global population that lives in towns and cities within 60 kilometers (37 miles) of the coast, including eight of the world’s 10 largest cities. These rising sea levels puts millions of people at risk worldwide as storms intensify and more extreme flooding occurs. 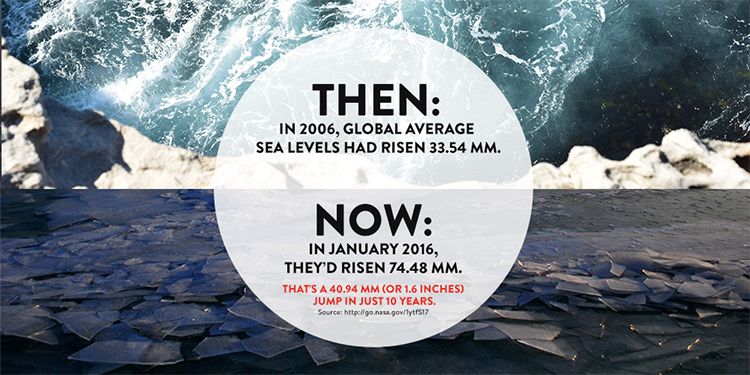 In 2006, concerted international action on climate change was still just sputtering along. The Kyoto Protocol—the first serious attempt at setting international targets for reducing emissions—had gone into effect the year before, but the U.S. never ratified the agreement and splits between developed and developing nations meant it never worked quite as well as had been hoped. But what these failings did was kickstart a search for a better model of international cooperation on climate action. It wasn’t smooth sailing all the way, as the heartbreak of Copenhagen showed in 2009, when negotiators simply walked out and talks on a new climate treaty dissolved. But in the years that followed, countries kept talking and kept working on a new kind of framework that could bring nations at every stage of development together to solve our common challenge, leading to the landmark Paris Agreement last December.

It wasn’t easy getting there, but the Paris agreement represents a real turning point. Formally signed this Earth Day, the deal is the first of its kind to set global targets for reducing carbon emissions and includes commitments from major carbon emitters like the U.S., China and India.

Our Future is Bright

Yes, we have a lot of work ahead to stop climate change. But in the past 10 years, the world has made incredible progress in areas like advancing climate science, rapidly growing renewable energy technologies and international cooperation. And while we’re not going to claim An Inconvenient Truth was solely responsible for all these developments, what the film did was bring the challenge of climate change out into the open and into mainstream culture like never before. The result was people in every time zone started asking themselves what they could do—and got working on the answers.

Thanks to their answers and all the breakthroughs above, today we know we can solve it, if we stay committed to this path—and if our world leaders follow through with their commitments to reducing emissions in the Paris agreement. And that’s a truth worth sharing.

Ready to take action for the future of our planet? Sign up with Climate Reality and recommit to climate action on the 10th anniversary of An Inconvenient Truth.