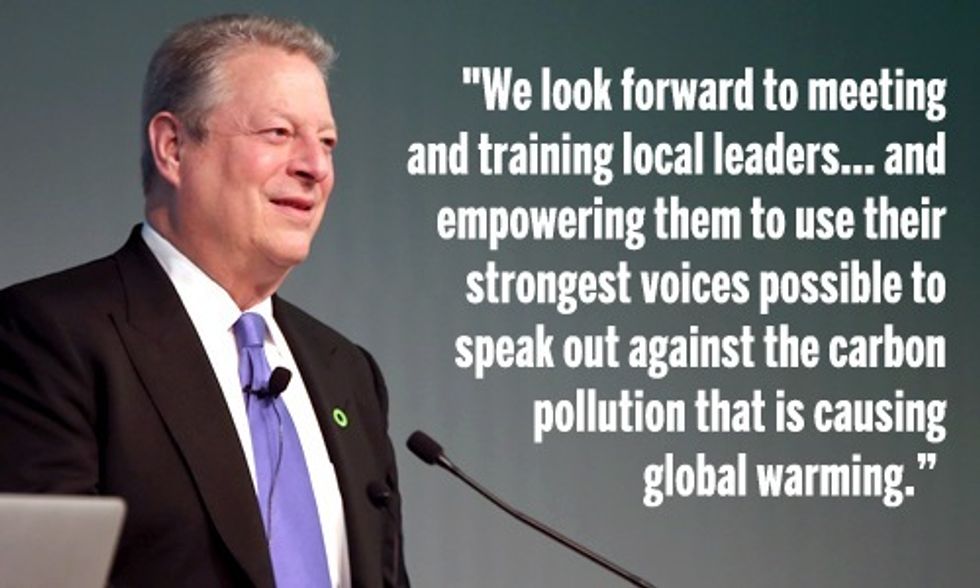 The Climate Reality Project announced this week that former U.S. Vice President Al Gore will travel to Toronto to lead a training for hundreds of new Climate Reality Leaders. The event—which takes place July 9-10—marks the 29th Climate Reality Leadership Corps training, and the first training in Canada since 2008. The training will focus on climate issues specific to Canada, including the cost of climate change to Canada’s infrastructure and economy, the promise of its growing clean technology sector, and its unique significance in driving a strong emissions reduction agreement at the COP 21 climate negotiations at the end of the year.

“At Climate Reality, we are deeply impressed by the bold climate action we have seen from municipal and provincial governments in Canada, including the deployment of local and regional carbon markets,” said Gore. “We look forward to meeting and training the local leaders who are driving this type of action on the ground, and empowering them to use their strongest voices possible to speak out against the carbon pollution that is causing global warming. We are optimistic that by holding this training, we will energize a new corps of leaders who can bring climate action to all of Canada, including the federal government, which has thus far been disappointing in its unwillingness to act.”

Canada is one of eight key focus countries for Climate Reality’s international Road to Paris campaign, which seeks to activate public support to call for the strongest possible national emissions reduction commitments in each country. Each of these countries, including Canada, represents a critical pillar in building a strong emissions reductions agreement at COP 21 at the end of the year in Paris.

While Canada has taken a first step by releasing an intended nationally determined contribution (INDC), as written, the commitment does not go far enough in reducing emissions or signaling to the international community that Canada is serious about stopping global climate change. In the absence of strong federal government commitments, Canadian provinces and city governments—including British Columbia, Ontario, Quebec, Toronto and Vancouver—have taken bold action of their own.

The training in Toronto is an important component of Climate Reality’s Road to Paris strategy for the country—participants in the Toronto training will spend two days acquiring the tools and know-how needed to effectively communicate about the climate crisis across platforms and demographics, speak knowledgeably about climate change and its many impacts, and inspire their networks and communities to take action.

“Community and local leaders in Canada have an incredible opportunity today to bring the message of climate action to the country and—ultimately—the world,” said Climate Reality President and CEO Ken Berlin. “We are training a network of motivated individuals who cannot and will not be ignored, and who will hold their leaders accountable for a strong commitment at the UN climate talks this year.”

As a traditionally resource-based economy that has in recent years focused significant attention on oil sands development, Canada faces the pressing challenge of diversifying its economic activity while reducing greenhouse gas emissions. It is the ninth-largest emitter of greenhouse gases in the world and the 11th largest economy, so its contribution will be key to the success of a global climate agreement at the UN climate negotiations taking place in Paris at the end of this year.

To apply by June 18, visit climaterealitytraining.org.