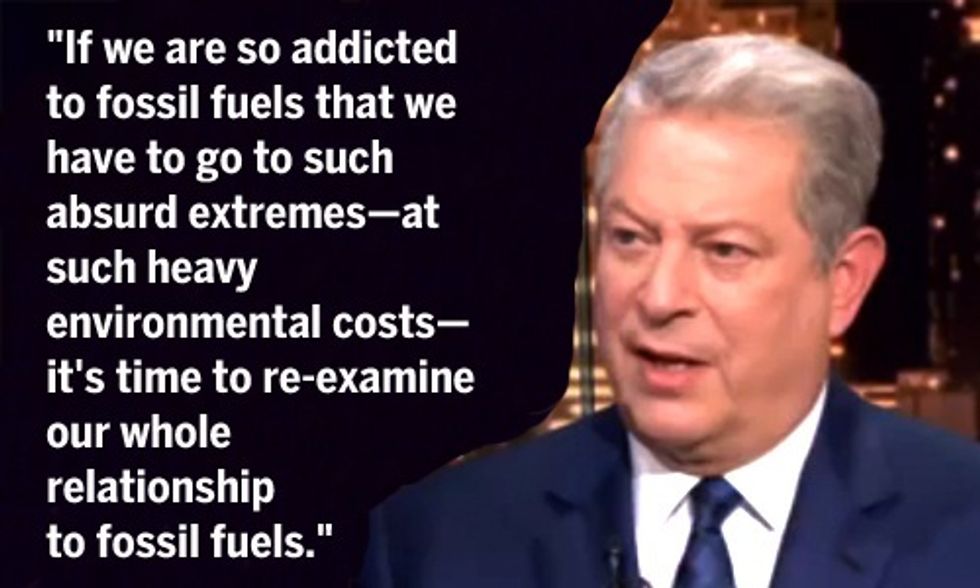 Chris Hayes hosted Al Gore, chairman of the Climate Reality Project, on MSNBC's All In with Chris Hayes on Tuesday. Hayes showed clips of several of the Republican presidential candidates' talking points on climate change, which Gore, of course, took issue with.

He found "at least two big flaws" in their argument. Pointing out that China is stepping up and trying to tackle its greenhouse emissions, Gore wanted to know "since when did the United States abandon its traditional world leadership role?" "This is the most serious global challenge we've ever faced. No other country can play the role that the U.S. can play," said Gore.

Gore also responded to Shell's decision to abandon its Arctic drilling operations, and said he's "glad" all three of the Democratic presidential candidates have come out against the Keystone XL pipeline. He "doubts it will go forward."

"If we are so addicted to fossil fuels that we have to go to such absurd extremes at such heavy environmental costs, it's time to re-examine our whole relationship to fossil fuels," said Gore.

And Al Gore is not the only one calling out climate deniers. Recently, Thom Hartmann asked climate denier Paul Driessen, senior policy analyst at Committee For A Constructive Tomorrow (CFACT) why he should not be thrown in prison for lying to the American public about climate change.