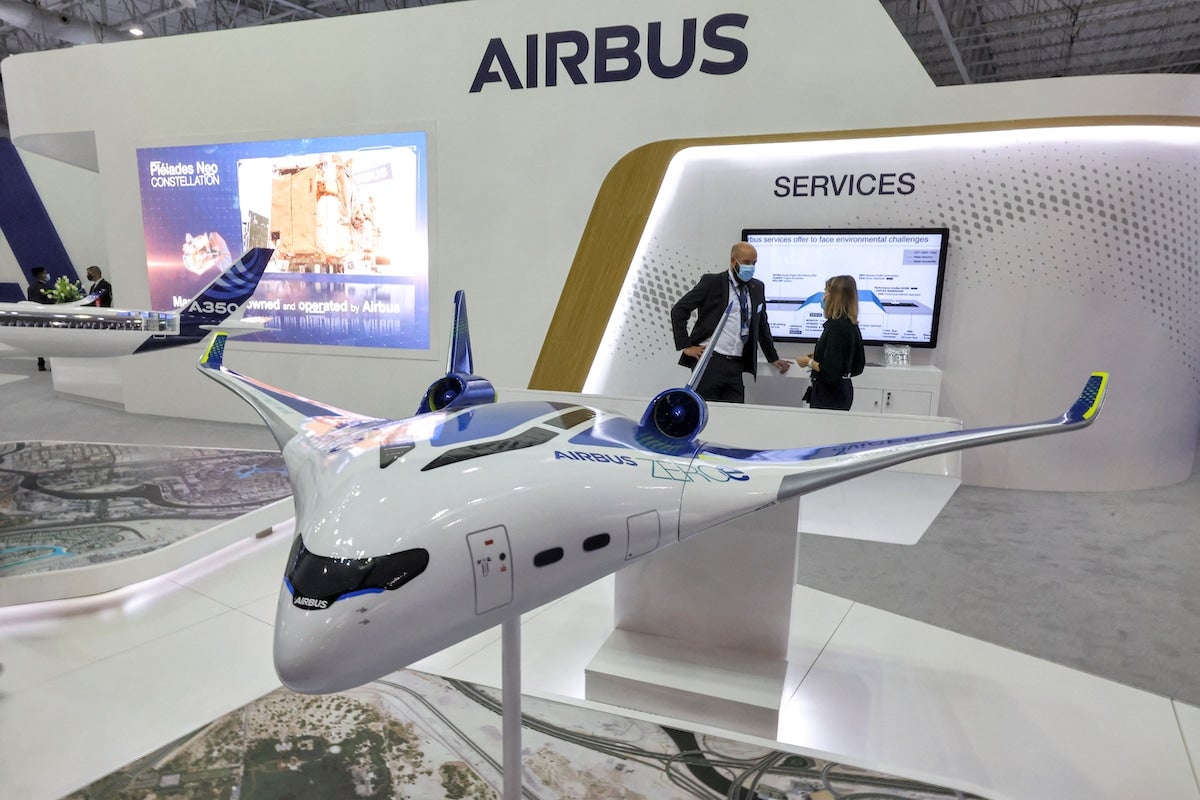 A concept for a hydrogen-fueled Airbus plane. GIUSEPPE CACACE / AFP via Getty Images

The CEO of the world’s biggest plane manufacturer warned that low-carbon flights could be delayed.

Airbus had previously promised to build the world’s first zero-emission airplane by 2035, but its chief executive Guillaume Faury said this new aircraft would have difficulty getting off the ground if hydrogen fuel was not developed quickly enough.

“Availability or lack of availability of clean hydrogen at the right quantity in the right place at the right price in the second half of the decade is a big concern for me,” Faury said, as The Guardian reported. “The infrastructure for producing and distributing green hydrogen is still in the early stages of development. But the clock is ticking for it to be in place to fuel commercial aviation by the 2030s, and probably many other sectors much earlier.”

Faury’s warning came at a briefing Wednesday about the Toulouse, France-based company’s plans to reduce greenhouse gas emissions. The company had previously announced its ZEROe concept aircraft which would be powered using hydrogen propulsion.

“All three ZEROe concepts are hybrid-hydrogen aircraft. They are powered by hydrogen combustion through modified gas turbine engines. Liquid hydrogen is used as fuel for combustion with oxygen,” the Airbus website explains. “In addition, hydrogen fuel cells create electrical power that complements the gas turbine, resulting in a highly efficient hybrid-electric propulsion system. All of these technologies are complementary, and the benefits are additive.”

However, the question is whether or not the hydrogen supply will be ready for the 2035 launch, something Airbus would have to know by 2027 or 2028 in order to move forward according to its current plan, Bloomberg News reported.

A lack of the alternative fuel “could be a reason for delaying the launch of the program, even if the technologies of the planes itself are mature,” Faury said, as Bloomberg News reported.

The aviation industry is under major pressure to reduce its greenhouse gas emissions, something that is proving difficult. The sector is responsible for 3.5 percent of emissions that contribute to the climate crisis, and its relative role is expected to increase as other forms of transportation electrify and more people take to the skies, as CNBC reported.

“Aviation is one of the fastest-growing sources of the greenhouse gas emissions driving global climate change,” WWF has said. ‘In fact, if the entire aviation sector were a country, it would be one of the top 10 carbon-polluting nations on the planet. Air travel is also currently the most carbon intensive activity an individual can make.”

The two main options for decarbonizing currently are hydrogen produced from water using electricity from renewable sources and sustainable aviation fuels (SAF), which are made from plants or recycled carbon and therefore don’t add more carbon dioxide to the atmosphere, The Guardian explained.

Airbus is working to improve hydrogen infrastructure by building a liquid-hydrogen facility at Toulouse’s Blagnac airport with rocket manufacturer ArianeGroup, Bloomberg reported. The facility will be ready by 2025, in time to fuel an A380 demonstrator aircraft as part of the ZEROe launch.

Airbus also has a goal of using 10 percent SAF by 2030. While Faury said the technology would allow it to use 100 percent, the supply once again is not there.

“By 2030, SAF will need to be produced at many times the level of today,” he said, as The Guardian reported. “Ambition is not yet matched by action. There needs to be more investment in new refineries and production facilities, and more ambitious mandates and objectives for sustainable aviation fuel. I believe it is difficult to overstate the scale of the energy challenge.”