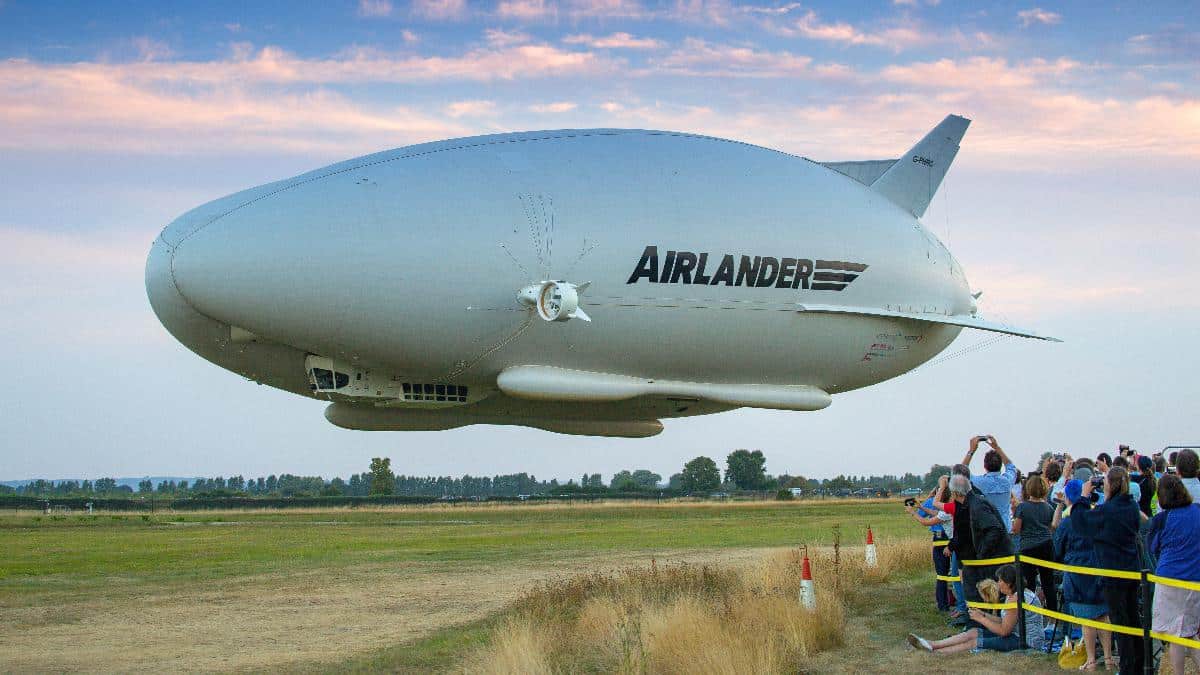 A UK blimp company has developed a new environmentally friendly airship for commercial flights. If it replaces airplanes on short, inter-city routes, the updated technology will reduce carbon emissions from air travel by 90 percent.

A company statement from the airship’s developer, Hybrid Air Vehicles (HAV), quoted United Nations Secretary António Guterres’ warning: “The latest analysis shows that if we act now, we can reduce carbon emissions within 12 years and limit global warming to 1.5C. But if we continue along our current path, the consequences are impossible to predict.”

HAV created the new airships to “rethink the skies,” as the company motto goes. BBC estimated that the aviation industry is responsible for around 2.4 percent of global carbon emissions and around 5 percent of global warming. There is an element of climate justice involved as well, because only a small portion of the world flies frequently, and often, those populations are not the ones who will suffer the most from the climate crisis. HAV developed their latest prototype, the Airlander 10, to combat the environmental cost of air travel.

“For many decades flying from A to B has meant sitting in a metal tube with tiny windows – a necessity but not always a pleasure,” said HAV commercial business development director George Land in a company press release. “On Airlander, the whole experience is pleasant, even enjoyable. And in the hybrid-electric and future all-electric configurations, Airlander is fit for our decarbonised future.”

Airlander 10 is HAV’s hybrid-electric prototype offering floor-to-ceiling windows for incredible views and natural light and direct-aisle access to every passenger in the spacious cabins. In its press release, the UK-based company named a string of city-to-city routes it hopes to service, starting in 2025. The prototypes should be available for purchase the same year. 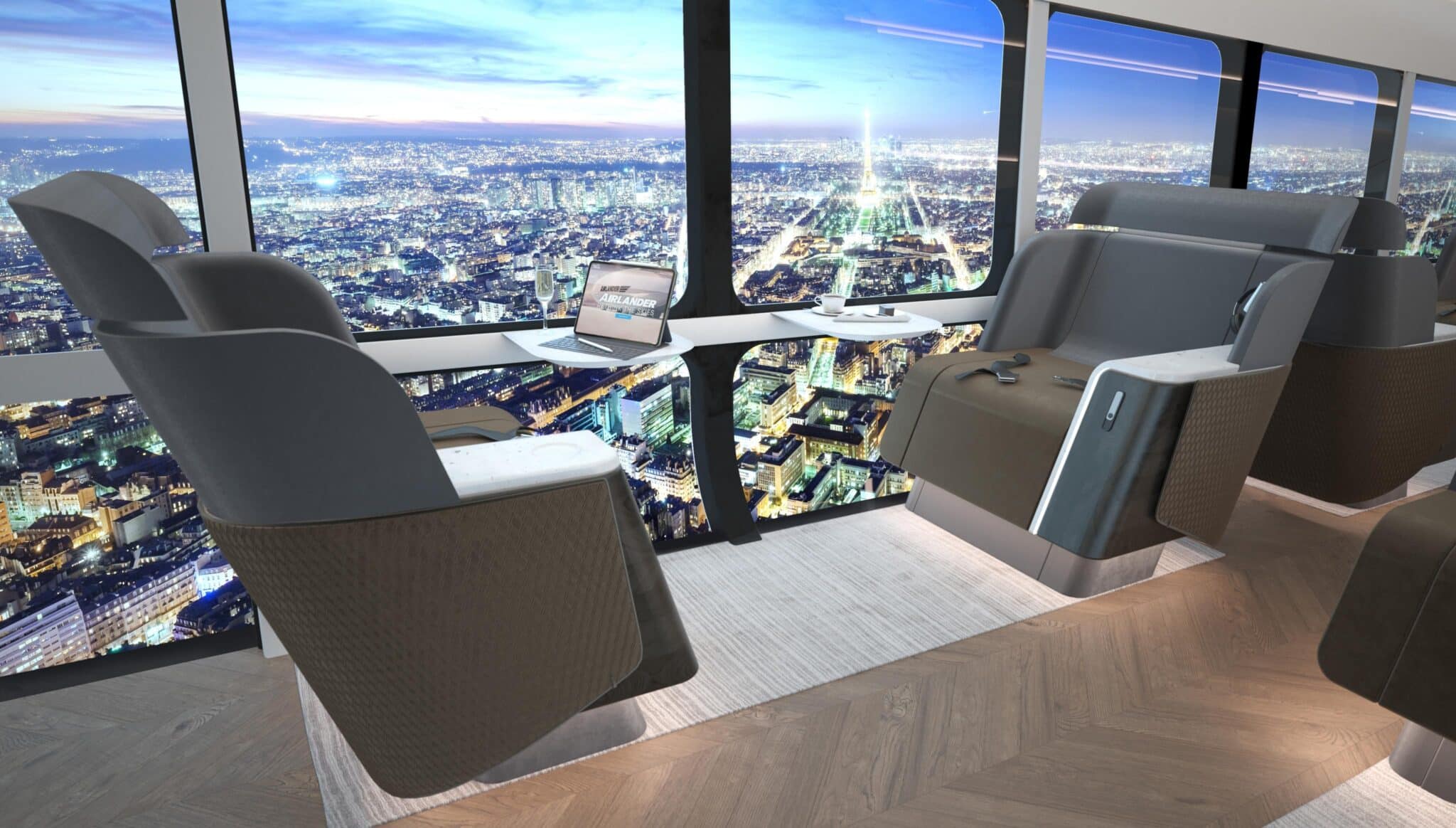 The futuristic-looking Airlander 10 is designed to be a fuel-efficient, low-emissions “ferry” for flying between cities. Hybrid Air Vehicles

Despite the futuristic cabin and unique interior, HAV’s Chief Executive Tom Grundy compared their product to a “fast ferry” in The Guardian, emphasizing, “This isn’t a luxury product. It’s a practical solution to challenges posed by the climate crisis.”

Grundy estimated that 47% of regional airplane flights connected cities less than 230 miles apart, The Guardian reported. But, because of the huge fuel expenditure (and carbon emissions) involved in all flights, these short flights emit a lot of greenhouse gases into the atmosphere. The Airlander 10 will require less fuel than a conventional aircraft due to a combination of “buoyant lift from helium, aerodynamic lift, and vectored thrust,” HAV told CNN. Shifting these shorter journeys from airplanes to airships will produce 90 percent less carbon emissions, the HAV press release said.

“We’ve got aircraft designed to travel very long distances going very short distances when there is actually a better solution,” Grundy told the news report. “How much longer will we expect to have the luxury of traveling these short distances with such a big carbon footprint?”

Total journey time in the hybrid-electric, 100-passenger airship should be “roughly the same” as airplane travel if time getting to and from airports is taken into account, The Guardian reported. What isn’t the same is the CO2 emissions per passenger on the airships when compared with a jet plane, the news report said.

Airlander also cites a “significant advantage” in not having to rely on airport infrastructure. The airships can take off and land from “any reasonably flat surface,” Grundy told CNN. “That includes water.”

HAV doesn’t plan to compete with long-haul flights or routes already well-served by high-speed rail, Grundy told CNN. The focus will be to connect cities a few hundred miles apart where the carbon pollution savings will be maximized.

HAV plans to develop all-electric powered airships by 2030 that would allow for travel with an even smaller carbon footprint. Even though the prototype is still a concept design, engineering and regulatory demands have guided HAV’s plans and that the product is “practical, feasible, and ready for the transition into production,” the press release said.

HAV has attracted big funding in the past for other developments, including backing from the UK government and the European Union, AIN online reported. The company is currently in discussions with a number of airlines to operate inter-city routes and expects to announce partnerships in the next few months. 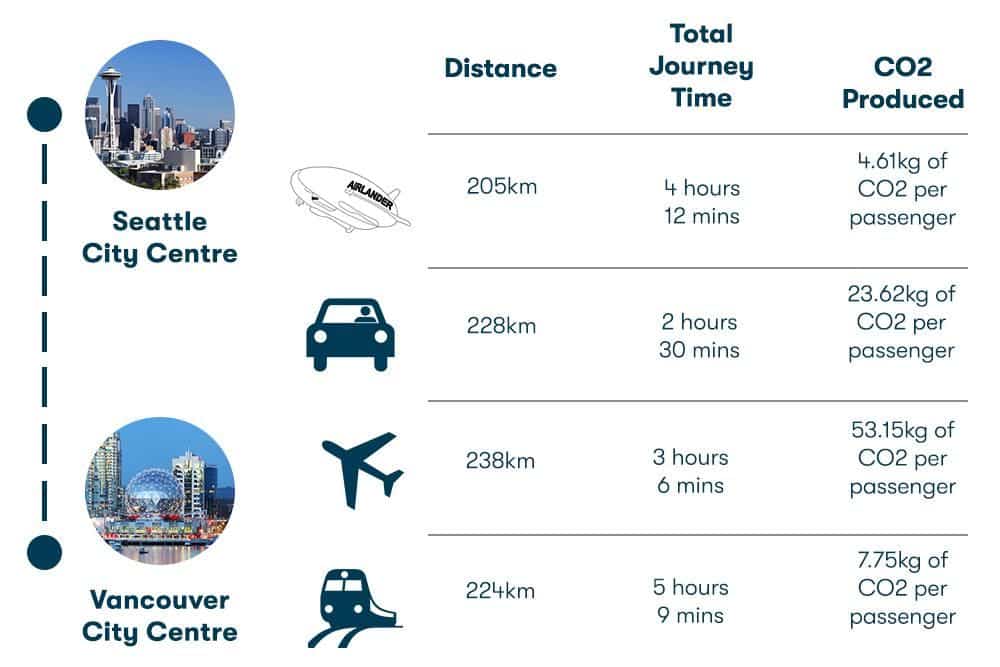 A time and carbon emissions comparison of travel between Seattle and Vancouver shows travel by airship to be the most environmentally friendly. Hybrid Air Vehicles