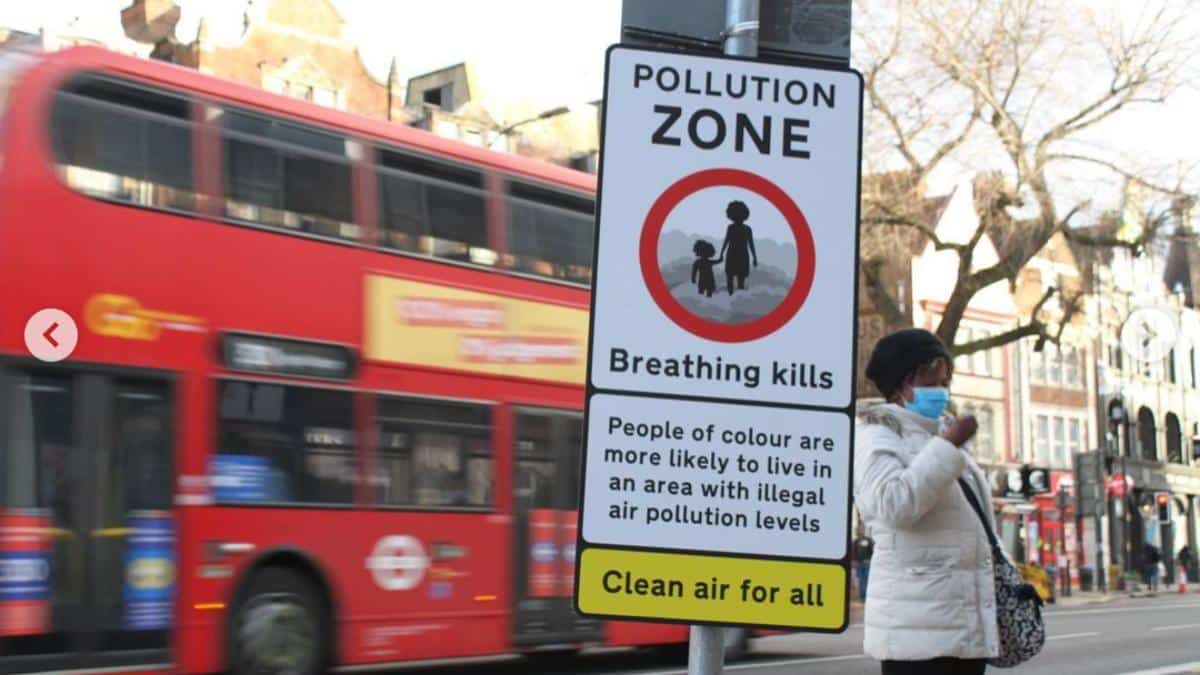 A group of teenagers, living in some of London’s most polluted communities, are posting roadsigns highlighting the disproportionate impact air pollution has on people of color.

The campaign, organized by Choked Up, a group made up of self-described “Black & brown teens,” has posted signs throughout the city which warn “breathing kills” and “pollution zone,” The Guardian reported.

Motivated to put an end to early deaths and the negative health impacts toxic air inflicts, Choked Up’s co-founder Anjali Raman-Middleton, 17, said: “I’m terrified that my daily commute to school along the South Circular has already had a negative impact on my lungs,” according to The Guardian. “I urge London mayoral candidates to commit to transform these roads to give me and my generation a greener future.”

Raman-Middleton was also inspired by the recent ruling regarding the nine-year-old Londoner, Ella Adoo-Kissi-Debrah, which made her the first person in the UK to have air pollution exposure listed as the cause of fatality on her death certificate, adding it “proved that the road I live less than five minutes from can kill,” according to the BBC.

We grew up along the polluted streets of London, breathing illegal air. Our stories have been forgotten and overlooked. But not anymore.

We believe our dream of #CleanAirNow is not unrealistic or too much but exactly what we deserve.

The call to action follows recent research by the Environmental Defense Fund Europe, which shows that nitrogen dioxide levels are on average “24-31% higher” in communities where people from Black, Asian or ethnic minority backgrounds are more likely to live, the BBC reported.

“Air pollution affects every single one of us from birth to old age, but we know the least well off and marginalised communities, including those from black and Asian backgrounds, are being hardest hit,” said Dr. Laura Jane Smith, a respiratory consultant at King’s College Hospital and signee of the letter, according to The Guardian.

Research also found in some areas of London, one in five primary schools are near major roads, where children are exposed to high levels of pollution, and schools with the highest percentage of non-white students are exposed to on average 28 percent higher NOx levels than schools with the lowest proportion of students from Black and other ethnic minority backgrounds, according to the EDF.

Exposure to toxic air has a direct impact on health, specifically targeting young people whose bodies are still developing, leading to asthma and heart conditions. Growing research also suggests pollution can increase the risk of depression and dementia, The Guardian reported.

“Like the COVID-19 pandemic, air pollution is disproportionately impacting marginalised communities and Black, Asian and minority ethnic people,” Oliver Lord, head of policy and campaigns at Environmental Defense Fund Europe said in a statement. “It’s clear London’s busy roads are a root cause of health inequities and air pollution levels are a major contributor.”

The youth group, Choked Up, is putting signs specifically in London’s “red routes” which make up five percent of its roads but hold a third of its traffic, according to The Guardian. The teenagers are calling on mayoral candidates to transform these roads, with fewer private cars and walking and biking routes, as well as zero-emissions public transport, according to the EDF.

“We took action so that lawmakers, decision makers and politicians finally take this climate and air quality crisis seriously, for everyone’s sake.” Nyeleti Brauer-Maxaeia, a 17-year-old co-founder of Choked Up, said, according to the EDF.

The efforts of the teen activists are also supported by Mums for Lungs, a group of London parents campaigning for clean air.

“The street signs are hard hitting because we want people to take notice of the huge damage being done to their health by air pollution.” Jemima Hartshorn, a parent who is part of the Mums for Lungs group, said, according to the EDF. “It is crucial that the message is heeded by politicians that if we do not take action on air inequality there will be more and more hospital admission and sadly more needless deaths of children.”