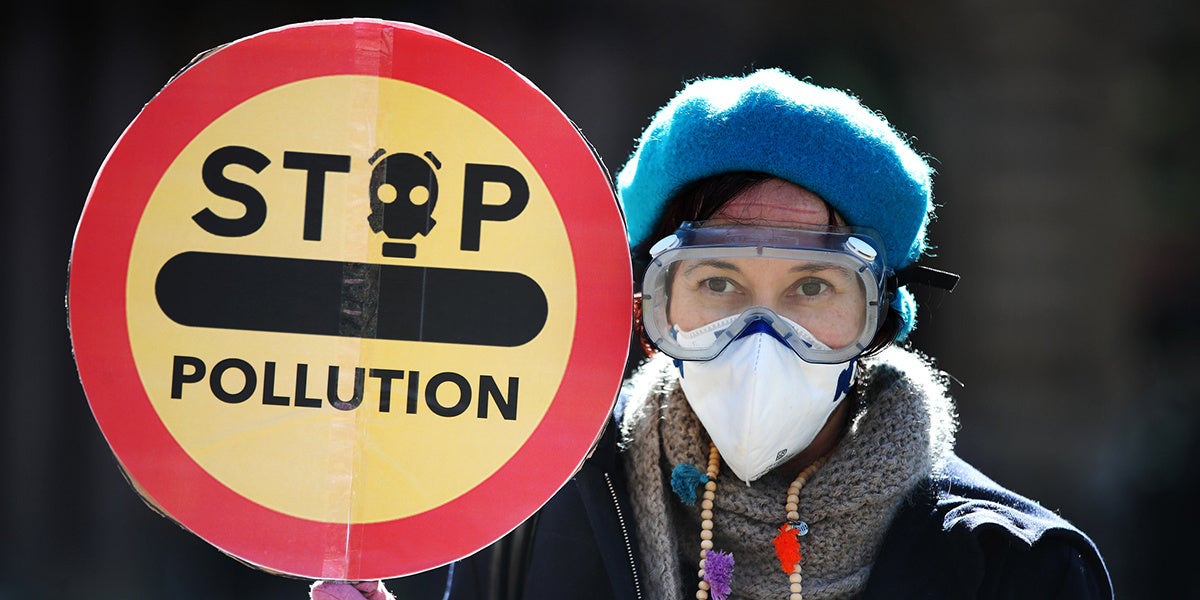 Not a day seems to go by without a story of an “airpocalypse,” usually somewhere in a developing nation. It’s hard not to empathize with the people in the smoggy images of New Delhi or Ulaanbataar or Kathmandu, often wearing masks, walking to school or work though soupy cloudiness.

Last year, a study found that more than 8 million people per year die early from air pollution exposure. This amounts to more deaths than diarrheal disease, tuberculosis and HIV/AIDS combined.

As a researcher in air pollution and its health effects, I know that even if you don’t live in these places, air pollution likely still affects your quality of life. Here’s what you need to know.

1. What exactly is air pollution?

Air pollution is a general term that usually describes a mixture of different chemicals that circulate in the air.

Invisible gases, like ozone or carbon monoxide, and tiny particles or droplets of liquids mix together in the atmosphere. Each molecule is impossible to see with the naked eye, but when trillions gather together, you can see them as haze.

These chemicals are almost always mixed together in varied amounts. Scientists do not yet understand how these different mixtures affect us. Each person responds differently to air pollution exposure—some people have few effects, while others, such as kids with asthma, might become very ill.

What’s more, air pollution mixtures in a given location change over time. Changes can occur quickly over a few hours or gradually over months. 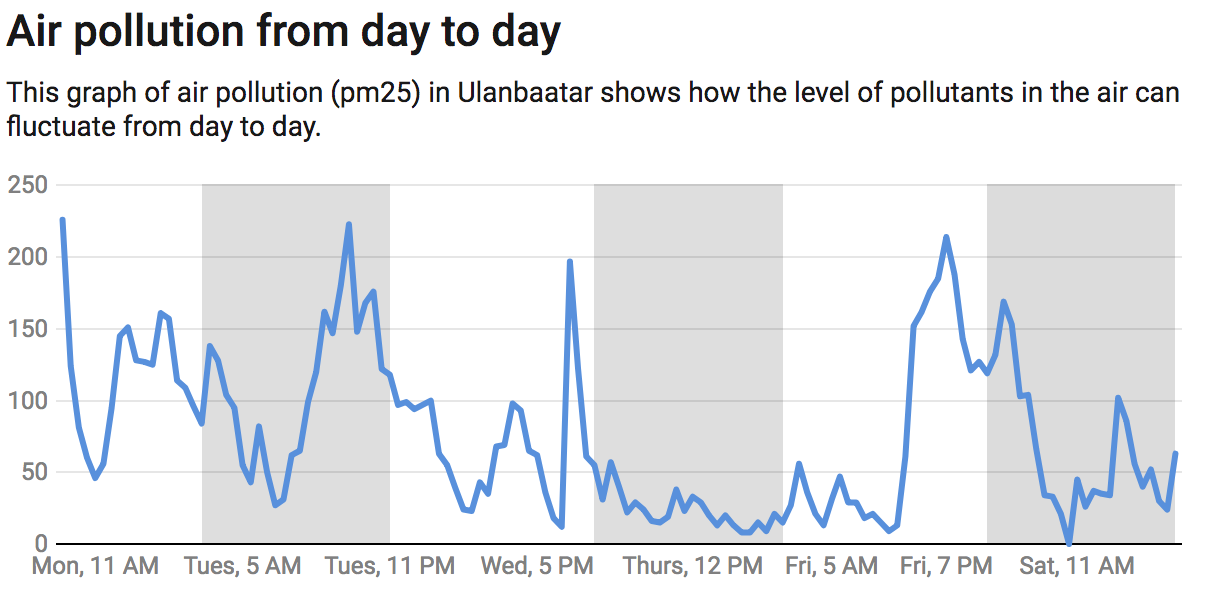 Short-term increases in air pollution from, for example, heavy traffic in rush hour, can make us sick. Such pollution occurs year-round. But seasonal pollutants, such as ozone, usually occur only in the warmest and sunniest parts of year. What’s more, the amount of ozone in air also goes up and down through the day—generally highest in the afternoons and lowest in the early mornings.

These variations can make it quite difficult for environmental health scientists and epidemiologists to know precisely how air pollution can affect humans. 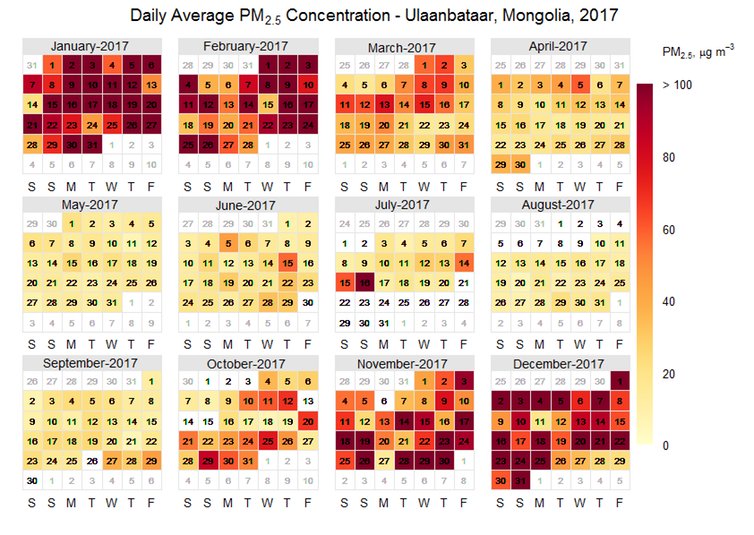 A calendar showing particulate matter concentration in Ulaanbataar, Mongolia in 2017. Note the highest concentrations appear in wintertime. The unusual increase in pollution in July corresponds with a Mongolian holiday.

2. Where does air pollution come from?

You might imagine air pollution as smoke pouring out of a factory chimney or the tailpipe of a car.

While these are important sources of air pollution, there are many others. Air pollution includes chemicals humans put into the atmosphere and chemicals released by natural events. For example, forest fires are a large source of air pollutants that affect many communities. Dust that’s picked up by wind can also contribute to poor air quality.

Ronald Reagan famously said that “trees cause more pollution than automobiles do.” While this myth has been debunked, he was right in at least some ways. Trees do release certain gases, such as volatile organic carbon, that are ingredients in air pollution chemistry. This, when mixed together with emissions from cars and industry, leads to increases in other types of pollution, such as ozone.

There isn’t much that scientists can, or should, do about tree emissions. Public health researchers like myself focus most on the ingredients from human activities—from burning petroleum to emissions controls on industrial facilities—because these are sources located close to where people live and work.

There are also many chemical reactions that occur in the air itself. These reactions create what are known as secondary pollutants, some of which are quite toxic.

Finally, it’s important to realize that air pollution knows no boundaries. If a pollutant is emitted in one location, it very easily moves across borders—both regional and national—to different places. New Delhi, for example, experiences seasonal pollution, thanks to extensive burning of agricultural fields some 200 miles away.

New Delhi is an extreme example. But, even if you live in a less polluted environment, pollutants emitted elsewhere often travel to where other people live and work, as seen in recent wildfires in California.

3. How do we know that air pollution causes problems?

This is a tricky question, because air pollution is a hidden problem that acts as a trigger for many health problems. Plenty of people suffer from asthma and lung diseases, heart attacks and cancer, and all of these are linked to particulate matter exposure. The best evidence to date suggests that the higher the dose of air pollution, the worse our response will be.

Unfortunately, there are many other things that lead to these diseases, too: poor diet, your inherited genes, or whether you have access to high quality medical care or you smoke cigarettes, for example. This makes figuring out the cause of a specific illness attributed to air pollution exposure much more difficult.

4. Why does this matter to you?

A typical adult takes around 20,000 breaths per day. Whether or not you become sick from air pollution depends on the amount and type of chemicals you inhale, and whether you might be susceptible to these diseases.

For someone living in polluted New Delhi, for example, those 20,000 breaths include the equivalent of around 20 grains of table salt worth of particulate matter deposited in their lungs each day. While this may not seem like much, keep in mind that this particulate matter isn’t harmless table salt—it’s a mixture of chemicals that come from burning materials, unburned oils, metals and even biological material. And this doesn’t include any of the pollutants that are gases, like ozone or carbon monoxide or oxides of nitrogen.

The U.S. and Europe have made excellent progress in reducing air pollution concentrations over the past couple of decades, largely by crafting effective air quality regulation.

However, in the U.S. today, where environmental laws are being methodically dismantled, there is a bigger worry that policymakers are simply choosing to ignore science. One new member of the Environmental Protection Agency’s science advisory board is Robert Phalen of the University of California, Irvine, who has suggested that “modern air is too clean for optimum health.”

This goes against thousands of research papers and is certainly not true. While some components of air pollution have little effect on human health, this should not be used to muddy our understanding of air pollution exposure. This is a common tactic to confuse the public with unimportant statistics in order to sow confusion, presumably with an underlying intent to influence policy.

The evidence is clear: Air pollution exposure is lethal and causes death across the world. That should be important to all of us.